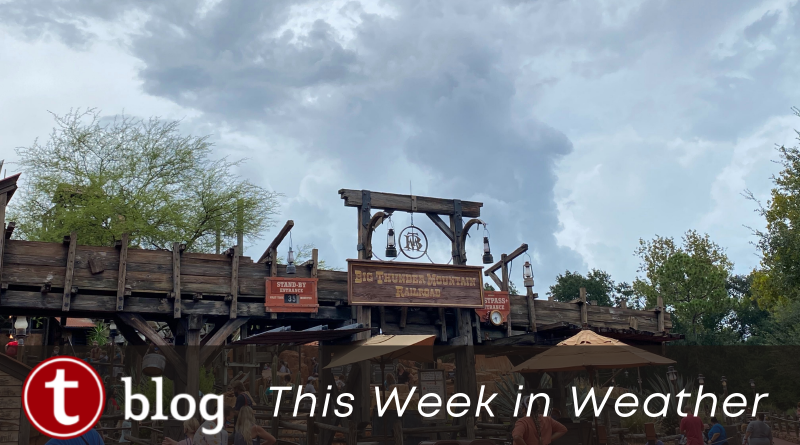 It has been an extremely wet September around Walt Disney World. If you’ve been in the neighborhood, your shoes have gotten wet at least once, and you’ve probably had to clear out of the pool due to lightning. And all of that was before the tropical depression moved through south Florida, turning into Tropical Storm Sally while still pouring down rain on the peninsula.

If you were expecting a drying-out in Sally’s wake, surprise! It’s going to be another wet week. Tropical moisture is still in place, allowing our sea breeze storm pattern to continue operating. That should be in place for another month, by the way. The average end of the Florida rainy season is October 14 or so.

This week’s forecast is pretty repetitive, but if you get bored, just scroll down for the longest tropical update I’ve ever had to write!

With Tropical Storm Sally moving west-northwest from the area, associated rainbands will continue to move through. But with the storm’s departure, the tight gradient between low and high pressure will loosen, and as the winds die down, the steering currents aloft will weaken. This means those rapidly moving storms we had yesterday will slow down this afternoon.

There will be a good chance of heavy rainfall this afternoon and evening — but not a lot of lightning, so you can stay outside if you don’t mind getting wet. But we’re talking very wet. If you get caught under a rainband, several inches of rain could fall in a short period of time.

On Monday, the southeast wind associated with Sally switches back to the east, helping the sea breeze patterns get back on track. Expect showers and storms moving in from the coast, with rain possibly sticking around into the evening. The high will be around 90, with about a 70% chance of showers and storms. Overnight low will be around 76 degrees.

On Tuesday, we’ll have a breeze from the east southeast, a high of 90, and a 70% of showers and afternoon thunderstorms. They’ll taper off late in the evening, with a low of 74.

Wednesday, the breeze picks up again in the afternoon with a high of 90, and a 60% of showers and afternoon thunderstorms. The overnight low will be 75.

Thursday through the weekend, you can expect a high around 92 degrees with more showers and afternoon storms. The chance of rain is 60%, with an overnight low of 76 once they clear out.

Historically and statistically, this has been the perfect week for tropical cyclone activity. Close to home, we just passed the anniversary of Hurricane Irma, which  roared through Florida three years ago, causing widespread damage and power outages in the Orlando area.

This is the height of the hurricane season. The period from mid-August to mid-October accounts for 78% of all tropical storm days, 87% of minor hurricane development, and 96% of major hurricanes. If you’re making plans this time of year in Florida — or anywhere along the Atlantic and Gulf coast — you should be doing so with the awareness a hurricane could interrupt your schedule.

So today, as we duck and cover from tropical rains, there are seven active areas of interest in the Atlantic and Gulf of Mexico. (The Caribbean is quiet!)

We can discount about half of these from affecting Central Florida. First, let’s look at the organized storms:

After these, we have three areas of interest. Closest to home there is a stirring of rain and low pressure in the south-central Gulf of Mexico. Before 2020, you probably wouldn’t have thought the Gulf of Mexico was big enough for two tropical systems at once, would you? Anyway, this one is drifting southwest and has a low chance of development, but it’s there.

Right behind Tropical Depression Twenty, a tropical wave is forecast to move off the coast of Africa. It will have a low chance of some gradual development over the next week. Right above that, an area of low pressure is trying to get organized into a tropical system. It has a strong chance of development, but will move into cold waters and a windy atmosphere as it tracks northwest.

As you can see, the Atlantic can be extremely active—possibly more active than in any other recorded year—but the mainland and even Caribbean Islands can still be relatively unaffected by all of this weather. Of course, all that rain and wind has to go somewhere and our friends in northern Europe probably end up dealing with most of it—thanks, guys!

But one hurricane in any season is more than enough, as I’m sure our Gulf Coast readers will agree. Seven named storms have made landfall in the U.S. this year, and Florida has seen impacts from quite a few of those. With another month to go at the season’s peak strength, and La Niña officially developing in the Pacific, all we can do now is check our supplies, keep back-up plans, and watch those forecasts.

Have any questions about this week’s weather? Feel free to ask in the comments.