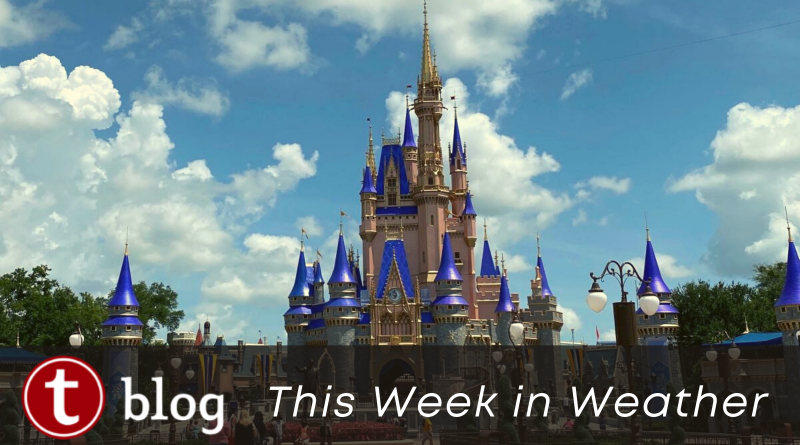 Labor Day weekend 2020 is in full swing in Orlando, with sold-out theme parks from Walt Disney World to Universal. It’s a different picture from last year, when Hurricane Dorian all but crashed Labor Day weekend. To be honest, I can’t even remember if it rained or if Dorian was a total non-event in Orlando…I just remember the fuss when the Disney Springs Starbucks closed early.

This year, we’re looking at a very wet pattern for the week after Labor Day. That makes September 2020 very different from September 2019 — so far. Last year, the dry air left in Dorian’s wake made Centr al Florida’s rainy season slam to an abrupt end. This year, though, we’ve already seen plenty of rain to start September…and plenty more rain is in the forecast.

The cause of all the wet weather ahead? A lot of atmospheric factors are in play, but the most obvious one to point to is an inverted trough over the Bahamas, which is going to drift west and northwest through Wednesday. This will draw more tropical moisture into Florida and, importantly, a strong onshore flow. When the east coast sea breeze is aided by strong onshore steering currents, rain can begin drifting inland early in the day, with storms kicking up throughout the hot midday and afternoon hours.

Later in the week, a ridge of high pressure will conspire to keep those southeast winds blowing, meaning this extra-wet pattern will stick around through the weekend.

Despite the likelihood of additional cloud cover and strong chances of scattered storms moving through, temperatures will continue to soar. They’re expected to be just above average, with high heat index numbers, all week long. That means 91-94 degree days, with a heat index close to 105 around midday into the mid-afternoon.

For the rest of Sunday, the big heat will continue with a heat index around 105 degrees. Storms will be moving through from the east, with a 50% chance of seeing some thunderstorm action in the theme parks. Storms will slowly clear in the evening, leaving some clouds and a low of 75.

On Labor Day, look out for higher storm chances beginning in the morning, then ramping up around midday. The wind will pick up from the east-northeast, pushing those storms along. They’ll have the potential for heavy rains and frequent lightning. The chance of storms is 70%, fading late night with a low around 74.

Rain returns Tuesday, with a decent chance of showers and some thunderstorms. The high will be around 91, although it might be a cloudy sort of day. Rain chance is 70%, trailing off in the late evening with a low of 75.

On Wednesday, expect rain showers with a possible thunderstorm. There’s an 80% chance of rain, but the high will still be around 91 degrees, giving you an idea of how patchy the rain could be. Late, the rain chance dies off and leaves us with a low of 75.

Thursday should be quite sunny and 92 degrees, but there’s still a 70% chance of showers and storms moving through the theme parks. We’ll see mostly cloudy skies for the overnight with a low of 75.

Friday and Saturday are much the same, with a high of 93 degrees and a 70% chance of rain.

This week we have four potential tropical systems to talk about, and two are pretty hot. None of these will affect Florida in the coming week, but the long-term forecast might have some interesting features.

The most impressive area is a disorganized low pressure system in the south Atlantic, about halfway between Africa and the Leeward Islands. It has a 90% chance of developing into a tropical cyclone by Tuesday, and will continue to move generally west.

The second area is showing signs of organization, but is farther away. This tropical wave has just left the coast of Africa. It’s expected to become a tropical depression in the next few days, and continues to have high development chances through the rest of the week as it moves west.

In the central Caribbean, we have a tropical wave that is largely disorganized and unfavorable conditions for any real improvement. It has a 10% chance of development.

And finally, a trough of low pressure near Bermuda is looking broody, but the environment isn’t really conducive to development and it has a very low chance of developing as it moves west-northwest over the next five days. As you can see, it looks like it might be bringing some rain to the mid-Atlantic by late week.

We’ll let you know if anything pops up which might affect Florida, but so far… a quiet week shoreside.