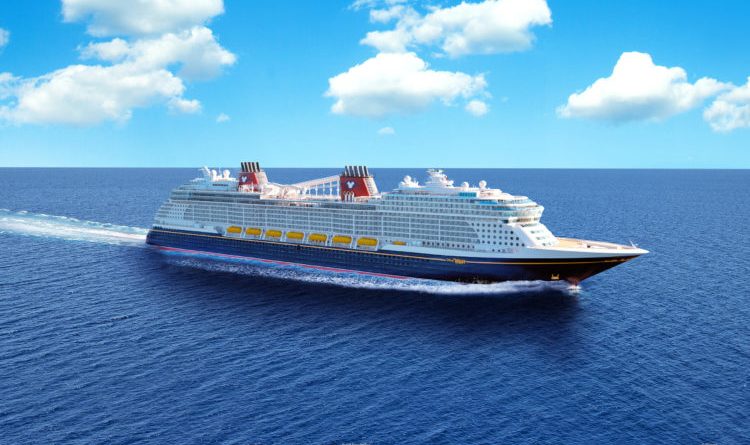 We are anxiously awaiting the summer of 2022 so that we an final experience the Disney Wish. And trust me when I say that after Disney’s reveal of this Disney Cruise Line ship today, the summer of 2022 can’t get here soon enough! So, let’s dive right in a learn more about this enchanting ship! (PS: This will be a multi-part story….so hang on to your hats, cause this here’s the wildest ride in the wilderness! Or some sailing pun that I can’t think of right now.)

First, let’s start with the part that so many of us are excited about….when will the Disney Wish set sail?

The Disney Wish, the fifth ship in the Disney Cruise Line fleet will sail her maiden voyage on June 9, 2022. This will be a special five-night maiden voyage that includes two days at sea and stops in Nassau and Castaway Cay. Then, on June 14, 2022, Disney Vacation Club will host a three-night, members-only cruise to Castaway Cay. From there, the Disney Wish will sail three- and four-night cruises to Nassau, Bahamas, and Disney’s private island, Castaway Cay, from Port Canaveral, Florida. Bookings open to the general public on May 27, 2021 for cruises departing June through September 2022. Castaway Club members, Disney Vacation Club members, Adventures by Disney Insiders and other select Disney guests will have early booking opportunities beginning May 17. For more information, guests can visit the Disney Wish Itineraries page.

Ok….let’s get to exploring the common spaces, including the lobby and the top deck.

For those who are unaware, Disney is viewing the Disney Wish and especially the atrium lobby, called the Grand Hall, as a castle on the sea. The lobby is themed after Cinderella and it will be a bright, airy and elegant space.  It will include a fairytale castle-inspired design and there will be glittering trails of pixie dust that climb the three-story columns, spilling across the ceiling and animating the chandelier above. The chandelier will be a swirling spiral of crystal gems punctuated with light, its crown jewel a wondrous wishing star. Then, at the base of a grand staircase, Guests will see Cinderella as a beautiful bronze statue. There will also be touches of Cinderella’s story on the railings that glisten with elegant stained glass in her signature colors, rich carpeting embellished with icons from the film, and nods to her carriage and glass slipper in the delicate metalwork and light fixtures. More details about the Grand Lobby can be found here.

Ok….let’s get to the water fun part of the ship! The top deck is always the place to go when you’re looking for a little sun and family time. Now for those who don’t know, Disney Cruise Line ships feature “attraction” water slides, both in the form of the AquaDuck on the Disney Dream and Disney Fantasy, and the AquaDunk on the Magic. But new for the Disney Wish is a water attraction that takes things to the next level! The AquaMouse will be a brand-new family water attraction that will bring to life the adventures of “The Wonderful World of Mickey Mouse” animated shorts like never before.

The AquaMouse is being billed as the first-ever Disney attraction at sea because it will include show scenes, lighting and special effects, and splashtacular surprises. This first-of-its-kind water ride will send guests on a fun family adventure through 760 feet of winding tubes suspended high above the upper decks.

As the story goes, Mickey and Minnie are starting their very own seaside excursion company called “Port Misadventures” and cruisers will join them on an undersea excursion to Mermaid Lagoon that will inevitably go awry. The journey will begin when guests board their two-seater ride vehicles and ascend into a magical tunnel. This tunnel will transport Guests into the cartoon world of “Scuba Scramble,” which is a new animated short that plays out through oversized virtual portholes. Along the way, Guests will encounter curious sea creatures, familiar Disney friends and more than 60 water effects. The attraction will be perfectly synched to an original musical score by Emmy-nominated composer Christopher Willis.

Guests will then blast out of the tunnel and embark on a wild water ride around the upper decks. Here they will zip into the forward funnel through an enclosed tube surrounded by lighting effects, followed by a dash through a dark tunnel that opens up to reveal incredible views of the ocean. They’ll Guests will jet up and down a series of speed blasters as they are propelled toward the grand finale which will be a soaring loop over the edge of the ship. With that, they’ll splash down for a sendoff message from Mickey and Minnie! This attraction sounds like it will be a hoot!

In addition to AquaMouse, families will have more pools, more deck space and more dining than ever before in an expansive pool district that will be themed to Mickey and friends.

Located on decks 11 and 12 midship, this area will include six pools of various sizes and depths. These pools will be spaciously staggered among tiered decks and surrounded by lounge chairs. Throughout the day, guests will enjoy a variety of poolside entertainment on Funnel Vision, which will play Disney movies, TV shows, live sporting events and more. For families seeking a laid-back environment, another family pool will be available on deck 14 forward.

The Disney Wish will feature brand-new food and beverage offerings on the upper decks too. These will including relaxed indoor dining and a fresh take on quick and casual fare. More details on these experiences will be released at a later date.

Toddlers and young children will go to “swim”-finity and beyond in a new Toy Story-themed waterplay district called the Toy Story Splash Zone. This will be a a fin-tastical water playground where Woody, Buzz and friends will be seen as larger-than-life rubber bath toys that move and spray water. The bathtub-themed splash zone is inspired by the short, “Partysaurus Rex,” and will combine the Old West of Woody’s Roundup with the intergalactic world of Buzz Lightyear. It will featuring two toddler-sized slides and pop jets, geysers and bubblers galore. Oh and don’t forget about the Slide-a-saurus Rex, which will be a double-looping waterslide that sends guests plunging “down the drain” with the rest of the toys when the “bathtub” overflows.

For those 18 and over, you’ll still have a great area to hang out and relax onboard the Disney Wish. Quiet Cove will be a secluded adults-only district dedicated to lounging, sipping and soaking. This area will be set away from the family areas at the back of the ship and will offer breathtaking views of the ocean from a luxurious infinity pool. Adults will be able to take a dip in the pool, unwind in a whirlpool spa, relax in a chaise lounge and indulge in a beverage from Cove Bar, which will be an open-air bar offering beer, wine and cocktails.

Another Disney Cruise Line favorite is the Cove Cafe, which is a poolside lounge that offers gourmet coffees, teas, specialty drinks and treats throughout the day. For the Disney Wish, this spot will feature the Oceania-inspired artistry Moana.

If you want to learn more about the Disney Wish, take a look at the webcast that shows off this ship here: