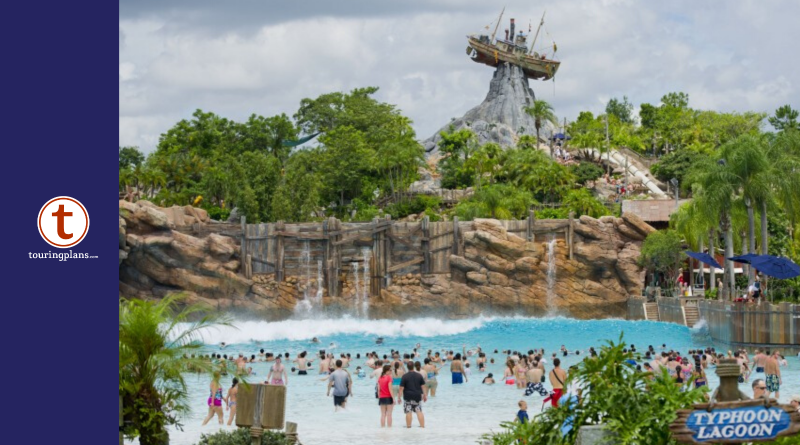 People often think Florida is always warm and sunny, and so they expect Orlando’s water parks to be perfect any time of year. Believe it or not, Florida does have seasons, and it’s important to know how the weather might affect your water park plans — ahead of time!

Typhoon Lagoon, Blizzard Beach, Volcano Bay, Aquatica: if you’re putting Orlando’s water parks onto your must-do list, take the season’s norms into account while you’re planning. More than any other theme park day, the right weather makes a huge difference in how much enjoyment you’ll get from your day.

Just like any theme park, arriving early at the water park can make a big difference to your day’s experience.

Naturally, right? This is when you have your pick of beach chairs and loungers, the shortest waits for attractions and slides, and the most uncrowded time in the wave pools.

Winter throws a slight wrench into these plans. Even on the warmest winter day, the mornings might leave you wishing you’d brought a wetsuit.

How chilly are we talking? Between December and March, morning lows average in the 50s and 60s. While unseasonably warm weeks with highs in the 80s are possible, January and February in particular will still have chilly nights in between warm days. A temperature change of twenty to thirty degrees between sunrise and mid-afternoon isn’t unheard of during an Orlando winter day. Fog and morning cloudiness can further delay daytime warmth, even when the day’s forecast was for sunshine.

While we’re talking daytime highs, take into account the extreme chill Florida experiences from time to time during the winter. The roughest cold fronts, with truly frigid days, tend to arrive between January and March. While an extended period of cold weather generally only hits Central Florida two or three times each year, you might just end up visiting during a cold snap. When that happens, water parks often close due to forecasted high temperatures and wind chills from the lower 60s on down.

The name Blizzard Beach makes it sound like it would be a great park in the cold, but you really would not like it.

Your best bet for winter water park days? Leave some wiggle room in your vacation planning to be sure you can head to the water park on the warmest day of the week. You don’t want to be locked into a Thursday at the water park if a cold front is arriving Wednesday night. When you do go, take along a book or plan to enjoy breakfast while you’re waiting for the sun to warm up the day. And plan to stay late into the afternoon to take advantage of whatever heat you can get.

As for nighttime events? Only the most heartiest of northerners need apply. Chilly evenings are almost a certainty!

As winter turns to spring in March, the weather stays unpredictable, but big temperature extremes tend to be related to cold fronts, rather than big overnight drops. And as spring wears on, the Florida sun really starts to heat up.

Spring might be the best season for die-hard water park fans. If you really love to spend the whole day out in the sunshine, splashing on slides, and body-surfing in the wave pool, April and May are your best bets.

These two months are generally very warm and dry. Long days allow for a significant period of daytime heating, but humidity levels are not yet at summertime levels. Continental cold fronts begin to weaken and stop reaching Central Florida by late April, ending the chance for heavy rainfall and steep falls in temperature.

The edge for perfect water park weather probably goes to April. In May, we occasionally see an early start to the rainy season, or even a tropical system which might dump rain for several days. Generally, though, by May daytime highs are in the low 90s, overnight lows are only in the 70s, and the sun is inescapable.

In fact, late May and the early days of June are typically among the most brutally hot days of the year. Until the rainy season begins, the cloudless skies provide no relief and relatively dry air helps the temperature shoot up. With highs in the mid to upper 90s not out of the question, and late afternoon heat indices well over one hundred degrees, a water park might be the only place you want to be. Just be sure you arrived early… you’re going to want to find a chair in a shady place.

Summer, the stormiest time of year, lasts from June to October in Central Florida. This is the season of afternoon rain storms, which often grow progressively stronger and larger as they approach the height of summer in August. So even though the temperatures are daily around 90 degrees, seemingly perfect water park weather, you’re going to have some interruptions to deal with.

Summer days generally start out sunny and humid, but fluffy cumulus clouds begin to appear around midday and then, one by one, thunderstorms start to pop up across the area. Depending on the strength of the sea breezes, they might be isolated storms which only soak a small area, or they might form into a huge cluster which drenches the entire Orlando area before they roll off towards the Gulf or Atlantic coasts in late evening.

Obviously this will have a huge effect on your water park day. A passing storm with lightning means everyone has to get out of the water and find shelter — generally this involves crowding into a gift shop along with half the rest of the park-goers. Lightning within a few miles of the park is all it takes to close all water-based attractions, so just a nearby storm could be enough to cause a short interruption.

A storm that sticks around, especially into late afternoon, will often mean a park closure. You’ll be sent on your way with no chance of enjoying the park again once the storm passes. Those big cluster storm systems which set up shop over Central Florida will end your water park day quickly (and they won’t even feel bad about it).

So what can you do about it? First off, rope-drop your water park and arrive a little bit before they open. This will get you in with the first wave of visitors, and you’ll be able to enjoy the attractions and water immediately since it’s so warm and humid on a summer morning.

Second, while you’re on your vacation, you can dig a little deeper in the weather forecast to see if there’s just a chance of an isolated storm, or a very high chance of significant storm coverage in the afternoon. Most basic weather apps will just show you the same icon for all four months of Florida’s summer rainy season: a little sun peeking out from behind a storm cloud. Not particularly helpful.

So take it a step further: download an app which gives you insight into the daily forecast models, or read the daily forecast discussions from the National Weather Service in Melbourne, Florida. This discussion can tell you what parts of Central Florida are most likely to see storms, and how heavy and long-lasting they will likely be. In turn, you’ll have a better idea of whether you can fit in a full day, or just a couple of hours, at the water park.

Fall can be a very good time of year to visit a water park. Generally, October is hot and the rainy season is just winding down. November and December are a little tougher to predict, sometimes hot, sometimes warm, sometimes affected by cold fronts and coastal lows which rain for days… really a mixed bag. Like the winter recommendation, leave a couple of days open for a potential water park day, or you risk getting stuck standing in line for a water slide on the coldest, wettest day of your trip.

From April to October, you can almost be assured of at least half a day of excellent water park weather in Central Florida — as long as no tropical systems roll through. The months of November through March really beg a little extra wiggle room in your planning. There are lovely and warm water park days just about every month of the year here in Orlando… the game is figuring out which dates they’ll fall upon!