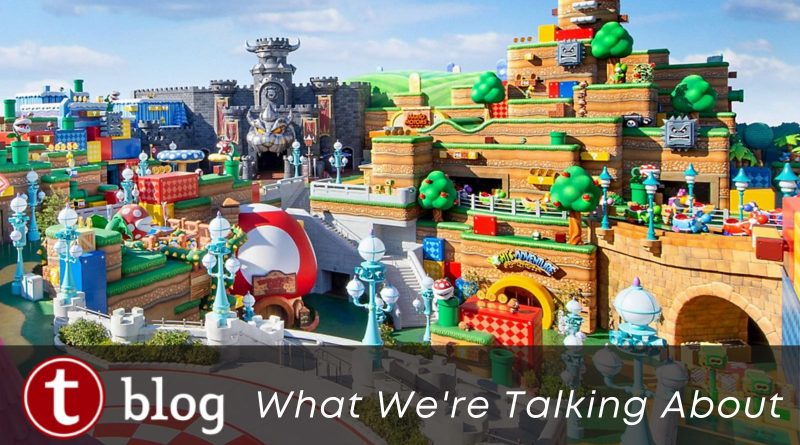 With this week’s edition of What We’re Talking About, Dani talks about why Ample Hills is no longer around at Disney and Joe shares his thoughts about Super Nintendo World. Plus we’ve got lots of other great articles too!

This is one heck of an article. If you are wondering what happened with Ample Hills….this story goes though everything. And it’s a doozy!

Dani has some thoughts about what happened here: This was such a good read. we’re all humans and we all have shortcomings, and it is a shame that this group got caught up in the sparkle of Disney and celebrity, instead of sticking to their foundation. Sometimes you have to stick to the basics in order to build sustainable growth.

A new bill has been proposed by California state assembly members that would speed the reopening of Disneyland and override the Governor’s guidelines that have kept large California theme parks shuttered. Do you think this bill will pass?

Dani states that: This move does not surprise me, and in all honestly, I hope theme parks can reopen.

Canada has moved to extend the country’s cruise ship ban, which was scheduled to end later this month, for more than a year to February 28, 2022. The move means that cruise sailings carrying 100 people or more out of Canadian ports and those traveling through Canadian waters, including Alaska sailings out of Seattle or Canada and New England sailings, will not be able to operate until March 2022 at the earliest.

The Walt Disney Company was once again named to Fortune’s “World’s Most Admired Companies,” list holding the fourth spot for the third year in a row.

A number of Disney films and TV shows have been nominated for Golden Globes for 2021, including The Mandalorian, Soul, Onward, and yes, even Hamilton. Overall, Disney received 25 nominations total. See the full list here. What do you think of the nominations?

Valentine’s Day is almost here and I thought these were really cute! Disney shared a recipe for Valentine Conversation Mickey’s! (You know….they look like the candy hearts!) I think I might surprise my hubby with these!

Huge news! Rodgers & Hammerstein’s Cinderella, the 1997 TV movie that stars Brandy and Whitney Houston, is officially coming to Disney+. Are you excited that it’s being re-released this way?

Disney has announced Pixar’s Soul, will be released on 4K Ultra HD, Blu-ray, DVD, and digital in March. So, for those who don’t have Disney+, here is your opportunity to see this great film!

The big talk this week has really been surrounding Super Nintendo World. Now, while it’s Japan’s version that is being talked about, we do know that some sort of version is coming to Orlando at some point. And if looks ANYTHING like this….it’s going to be next level! Take a look. Joe shares his thoughts about this insane looking land: Super Nintendo World looks BONKERS in the best possible way. The sleeper hit seem to be the awesome interactive elements that take one giant leap beyond the Potter wands.

What did we miss? Attach your articles to the Made With Soul collection and send it to blog@touringplans.com with the words “In Case You Missed It” in the subject line.

One thought on “What We’re Talking About: Ample Hills Meltdown, Super Nintendo World, and More”