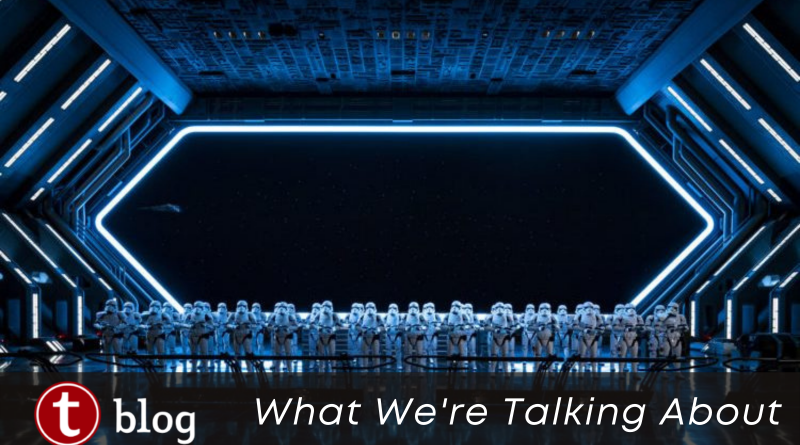 Featured Series
November 20, 2020September 24, 2022 Rikki Niblett 1 Comment In Case You Missed It, What We're Talking About
Share This!

This week, see what our team has to say about the Thea Awards, what James thinks about Baby Yoda in space, what Julia shared about advanced technology and more.

Awesome news for both Disney and Universal! The two theme parks were among the winners of the Themed Entertainment Association’s Thea Awards that were announced. Star Wars: Rise of the Resistance and Mickey & Minnie’s Runaway Railway rides were recognized in the attractions category. In addition, “The Bourne Stuntacular” show won in the live attraction spectacular category. In addition, in other big news, Bob Weis, president of Walt Disney Imagineering, received the Buzz Price Thea Award, which recognizes “a lifetime of distinguished achievements.”

Len shared his thoughts on the three attractions Those are three very good rides. I love all of them.

Dani also chimed in It’s interesting that we’ve seen some innovative attractions come online, as though we reached another peak in the wave, right before everything shut down. Hopefully we’ll see some great innovation again once things are better.

A big congratulations to former Imagineer Tony Baxter, as well as Disney Executive Greg Hale who helped helm FastPass, as the two were added into the International Association of Amusement Parks and Attractions (IAAPA) Hall of Fame.

Moving forward, the future Disney park experience will use tech, digital, and data to unlock storytelling and personalization, according to Tilak Mandadi, CTO and head of Digital at Disney Parks. He gave a glimpse at that future and how 2020 accelerated trends during IAAPA Expo. He also discussed the impressive speed that things were implemented due to COVID.

Julia weighed in I know that AR may not be everyone’s cup of tea, but given the very active fan base for things in the past like VMK (Virtual Magic Kingdom) and the current fanbase of non-Disney AR things in the park, like Pokemon GO, this really seems to be the next logical step. Now we’ll see if Disney will put the budget behind advancing tech.

Even the astronauts are in love with Baby Yoda! The Child recently joined the crew of the SpaceX Crew Dragon and hitched a ride to the International Space Station in style during the historic SpaceX-NASA mission.

James shared The Child has been a big part of the cultural zeitgeist ever since the very first episode of The Mandalorian, so it’s really no surprise that he would be given the chance the leave the earth’s atmosphere and enter our hearts as part of the SpaceX crew. I can think of nothing better than having Baby Yoda as my copilot (even though he can be a bit of a handful).

The LEGO Star Wars Holiday Special is now on Disney+, bringing Star Wars fans a brand-new story centered around Life Day. This isn’t the past holiday special from the 80s, but a brand new one. Have you watched it yet?

There will be multiple holiday specials this year on ABC. The Wonderful World of Disney: Magical Holiday Celebration will air on Thanksgiving and will feature Derek and Julianne Hough as hosts. The Disney Holiday Singalong is returning, with Ryan Seacrest hosting. The event will take place on November 30 and celebrity performances and appearances include Andrea Bocelli, BTS, Michael Bublé, Ciara, Chloe x Halle, Derek Hough and Hayley Erbert, Julianne Hough, Adam Lambert, Leslie Odom Jr., Katy Perry, P!NK, and Kerry Washington. Will you be watching either or both with your family?

What did we miss? Attach your ideas to a Mickey Mouse Vintage Holiday Plush (from that tearjerker of a commercial) and send it to blog@touringplans.com with the words “In Case You Missed It” in the subject line.

One thought on “What We’re Talking About: Baby Yoda, Thea Awards, Technology and More”