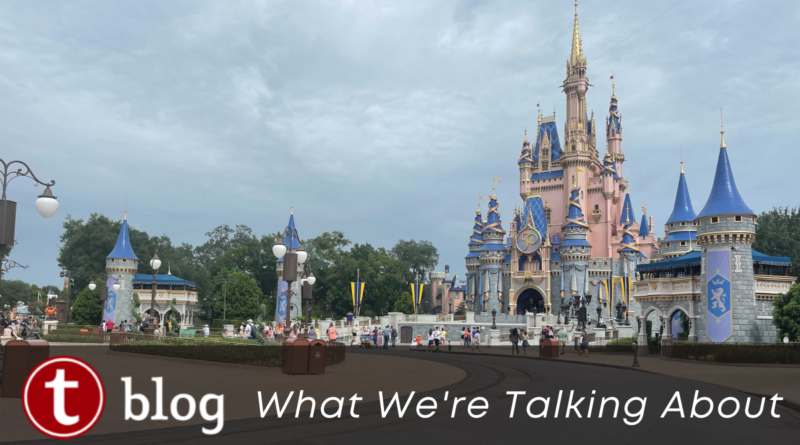 In Case You Missed It
September 3, 2021September 2, 2021 Rikki Niblett 0 Comments What We're Talking About
Share This!

Could we be close to the opening of Guardians of the Galaxy: Cosmic Rewind? Probably not. But the highly-anticipated indoor roller coaster, is apparently in the “final stages” of construction at Epcot, according to Walt Disney Imagineer Zach Riddley.

Joe agrees that it seems unlikely to be opening soon: This feels pretty meaningless since we’ve passed the 4th anniversary of Universe of Energy’s closure with no opening date.

Let’s just hope this goes better than the last Disney Happy Meal giveaway. (In which I was only able to get half of my Mickey and Minnie’s Runaway Railway train completed before the toys were recalled.) This time, there will be 50 Happy Meal toys in celebration of the Walt Disney World Resort’s 50th anniversary. The Happy Meal promotion will run from September 14 to October 25. All This time, all I’m on the lookout for is a Jaq and a Gus from Cinderella. Hopefully I can find those.

Julia said: Sounds like it is time for a sequel to the saga of Derek and Happy Meal toys:

After getting two more Scarlett Witch toys last night, I finally swallowed my pride at McDonald’s and asked if they were doing the Disney happy meal toys at the drive-thru.

I feel Derek’s pain. I too have that horse which was passed off as a Disney toy.

This is really sad. Frank Oz has shared that Disney doesn’t want him to do the Muppets anymore.

This week, we lost Ed Asner, who was the voice of Carl Frederickson in Up.

Having met Mr. Asner in person, he was very nice. I actually thanked him for the work he did in the film and I was able to grab a picture with him.

Color me even more intrigued. Darren Criss is going to star in the Muppets Haunted Mansion on Disney+. Look….I was already hyped about this. I’m even more so now.

Amy was the one who shared this news with me and says:  I was already excited for this Muppets special, but now I can’t wait because Darren Criss is my favorite actor/musician (I have seen him perform live 7 times) and he’s also a huge Disney nerd himself. Yay!!!

Another show for Disney+ has been greenlight for a second season. “Big Shot”, starring John Stamos will be back again.

Becky wasn’t impressed: I watched one episode of this … and then just couldn’t stick with it. Maybe I needed to invest a little more time in it, but I wasn’t hooked.

What did we miss? Attach your articles to a EPCOT Maelstrom Matted Print and send it to blog@touringplans.com with the words “In Case You Missed It” in the subject line.