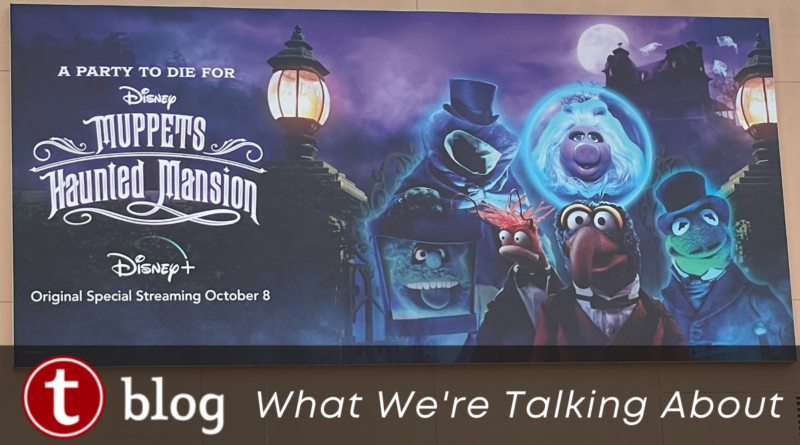 It’s time to say goodbye to Primeval Whirl at Disney’s Animal Kingdom. The attraction is being removed officially.

Becky has some thoughts: Nooooo … now if I want to ride something similar, I’ll have to go to the county fair

(Note: heavy amounts of sarcasm present in this response)

That’s where I put that! This week, Walt Disney’s plane was found on the Walt Disney World Resort property after it hadn’t been seen for a long time. (The last time I remember seeing it was in Disney’s Hollywood Studios.)

Julia backed me up: I remember you used to be able to see that from the back of Lights, Motors, Action at DHS, and so somehow it got moved to Animal Kingdom? That would have been cool and/or unnerving to see it being driven around property.

There are no words to show my excitement for this upcoming Muppets Haunted Mansion. Like….seriously….no words. My hype level for this is at an 11. Watch the trailer and you come to your own opinion.

Joe is with me: This looks delightful, I hope it lives up to our expectations.

So is Bob: I’m onboard with anything Muppets.

Speaking of the Muppets, Brett Goldstein who just won an Emmy for Ted Lasso, did a charity performance where he did Muppets Christmas Carol in 6 minutes and it is amazing.

Joe says: Brett Goldstein is a treasure that must be protected at all costs.

It’s like the Disney Superbowl. Disney+ day is coming in November and it will include 11 debuts from Marvel, Star Wars, Pixar, The Simpsons, NatGeo, and more. What are you excited for?

Jennifer says: I have been seriously impressed by the quality of Disney+ original content, enough that when I saw the “bonanza” number my first reaction was to worry that the honeymoon was over and we were descending into the quantity over quality stage.  I was actually kind of relieved to see that a lot of this is [great!] content that already existed and is just “premiering” onto Disney+, or in some cases into the free tier. I don’t know that I’ve ever been so happy to see the term premiere used so broadly.

Becky agrees with Jennifer: The quality of (most) Disney+ content is stellar, but I have been disappointed with quantity and/or release cadences. So I’m hoping this one-time blitz is followed by increased production and investment!

Bob is happy about one particular title though: I’m just happy that “Get a Horse” will be available – an absolute gem!

I may or may not have done this with my dog, Daisy, but not at a baseball stadium. In Seattle, at a Mariners game, they had a Bark at the Park where you could bring your dog, and they had a Simba cam! It was is adorable!

What did we miss? Attach your articles to a Mickey Mouse Jack-o’-Lantern Mug and send it to blog@touringplans.com with the words “In Case You Missed It” in the subject line.

One thought on “What We’re Talking About: Disney+ Day, Muppets, and More”