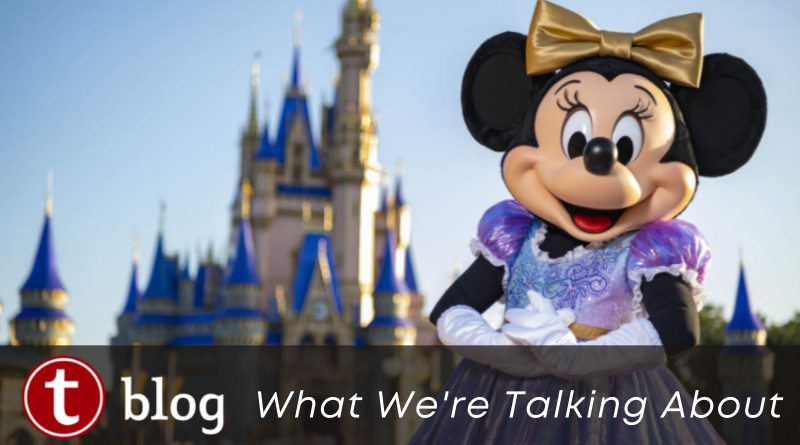 With this week’s edition of What We’re Talking About, Joe discusses the actual announcement of which Disney Stores will be closing, and Dani shares her thoughts on the returning Cast Members for Disneyland, plus so much more!

Disneyland and Disney California Adventure will reopen in April and in its efforts to reopen will recall 10,000 furloughed employees following a year of closures during the COVID-19 pandemic! This is great news!

Dani states: I remember us chatting for a previous What We’re Talking About about businesses urging California state government to allow theme parks and the like to reopen. It’s a nice hopeful feeling seeing plans to reopen being put in place.

Last week, we discussed the fact that it was announced that Disney Stores would be closing. This week, we got our list of which stores were on the chopping block. Is yours on the list?

Joe shares his thoughts on the closures: The Disney stores were always a taste of the theme parks at home when growing up. Their sale to Children’s Place, and the refocus to toys and dresses, really disappointed a lot of fans. Even with Disney bringing the stores back under their wing it was never the same. I hope we continue to have Disney Stores and that they focus on bringing a magical slice of the parks to our neighborhoods.

Bob Iger really is retiring. He’s slated to officially do so by the end of the year. He stated that “I will leave at the end of December with a strong sense of pride and a deep sense of appreciation for the very special place Disney holds in the hearts of people all over the world.”

This week saw the Walt Disney Company Shareholder Meeting call with lots of bombshells. Some we’ve discussed above, but some we haven’t. Take a look at what you may have missed along the way! What are your thoughts?

Did you know that Some of the most iconic images Guests know from the parks were created by women. Some extremely gifted female Imagineers were among the first generation recruited by Walt Disney. Learn more about these incredible creators here.

Dani shares: I love learning about Disney history, and from what I’ve read the early days of Disney were pretty typical to other businesses, where women were restricted to very minimal, administrative like roles. But over time quite a few notable women gained more prominent positions at Disney. Our society still has work to do to make things fair and equitable for women, especially women of color. Reading stories like this helps reiterate the work that’s been done and the work there is still to do.

If you live in the area, this is pretty cool. Philadelphia’s Franklin Institute was selected to launch the Walt Disney Company’s 100 year anniversary exhibit in February 2023. It will feature galleries and hundreds of artifacts from the Disney vaults and an immersive environment of sight and sound. Learn more about it here.

What did we miss? Attach your articles to a Star Wars Dual Brew Coffee Maker with Travel Mug and send it to blog@touringplans.com with the words “In Case You Missed It” in the subject line.