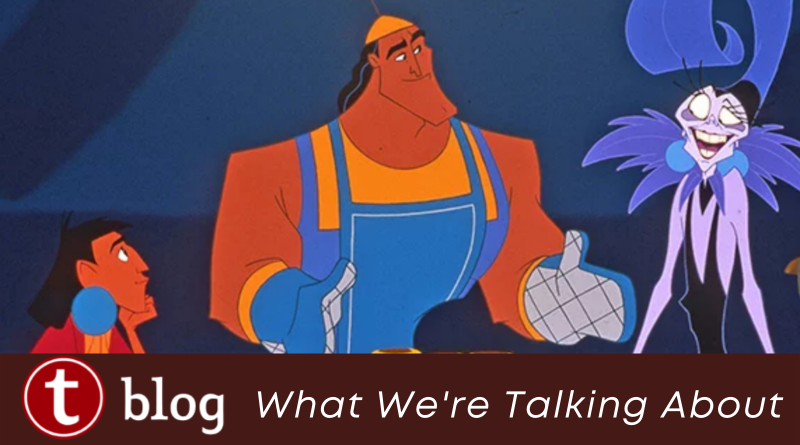 Featured Series
January 29, 2021September 24, 2022 Rikki Niblett 0 Comments In Case You Missed It, What We're Talking About
Share This!

With this week’s edition of What We’re Talking About, Dani shares her thoughts both about the upcoming film Raya and the Last Dragon, as well as Disneyland’s new Legacy Passholder system and Julia discusses how wonderful Emperor’s New Groove is.

Downtown Disney will once again be offering outdoor dining after California lifted regional stay-at-home orders across the state. Because of that, more than 200 Disney Cast Members are being recalled.

Disneyland passholders who had active annual passes when the park closed in March are now considered to be Disneyland Resort Legacy Passholders and they stand to be offered some new benefits, including the new title.

Dani shared what she thinks about the Disneyland updates: It’s nice that Disney is doing at least a little something as I know how important being a passholder is to the identify of many Southern Californians and other Disney fans.

Ok…gross or delicious? Everglazed Donut & Cold Brew is offering a grilled cheese sandwich with a glazed donut as the bread. Would you pick this up on your next trip to Disney Springs. (Gotta say….I’m not sure I would.)

Did you know that you could be a part of history in Walt Disney’s hometown of Marceline, Missouri? The Walt Disney Hometown Museum is currently selling brick pavers that will help you showcase your love of Walt Disney. Plus with your purchase, you’ll be helping out the museum too! What a cool idea!

Wow….this is a journey. This is the history of the making of the film The Emperor’s New Groove and why Disney will likely never do a film like it again. I do love this movie. I need to watch it again – it’s been a while.

Julia shared her thoughts on the film: For a company that likes to talk about how it stresses innovation and pushing the envelope regarding entertainment options, so many of Disney’s animated features are formula driven. That’s what makes Emperor’s New Groove so wonderful. The villain doesn’t die a horrible death. The henchman is a redeemable character that you love who never really was all that evil. The hero is “a big fat guy” (to quote Kuzco). There’s humor instead of emotional triggers. There’s no “love story” aside from a husband who loves his wife (who happens to be a character all pregnant women can relate to!). It’s a short film so it can be fast-paced. And that diner scene–one of the funniest moments in animated movies ever!

The trailer was released for the upcoming film, Raya and the Last Dragon. It will be released both on Disney+ (for premium access) and in theaters on March 5. Will you be seeing this film when its released? Or will you wait until it’s included on Disney+ without an extra fee?

Dani has some thoughts about the trailer: This is the first Disney movie trailer I can recall using a hip hop, pop style song. Which caught my attention. But I am seeing lots of folks saying how glad they are to have more representation in an animated film. Looks intense.

I didn’t think I could be more hyped about the VelociCoaster….then I read this interview with two of the individuals bringing this behemoth to life. This is going to be just an insane experience. I cannot wait!

What did we miss? Attach your articles to a Mickey and Minnie Mouse Valentine’s Day Pin Set and send it to blog@touringplans.com with the words “In Case You Missed It” in the subject line.