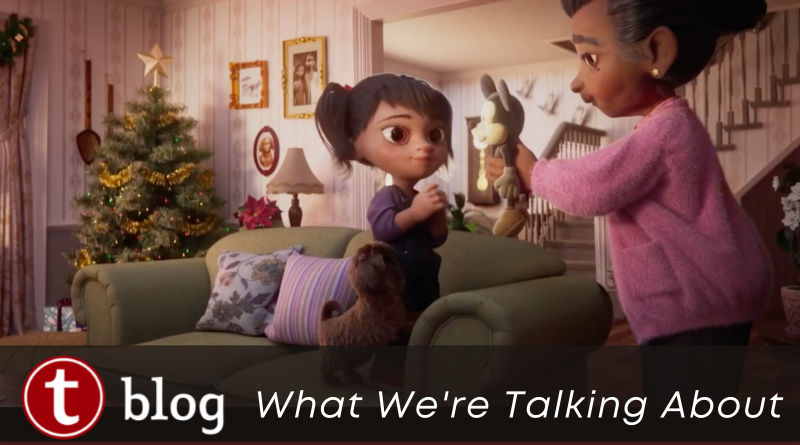 Featured Series
November 13, 2020September 24, 2022 Rikki Niblett 0 Comments In Case You Missed It, What We're Talking About
Share This!

This week, see what our team has to say about Disney’s new holiday ad, what Natalie thinks about recognition that the Walt Disney World Resort received for their recycling process, and more.

You might have missed the news (who am I kidding…it was everywhere.) With the announcement of news that Pfizer’s coronavirus vaccine was 90% effective in early trials, Disney and Universal stock (as well as just about every other stock) went WAY up! Investors appeared to be betting on the success of the vaccine to help the U.S. and world economies recover, which would help the tourism and restaurant industries rebound as well.

The Florida Department of Environmental Protection gave their Recycling Recognition Award goes to Walt Disney World Resort for their commitment to sustainability and environmentally friendly recycling practices. Good on Disney for protecting the environment and being recognized for it!

Natalie shared her thoughts on this news: Disney’s environmental efforts continue to impress me as maybe the thing the company gets right more than anything else. Solar farms, recycling, alternative fuels: they set a strong example and don’t let their sheer size get in their way.

I think I have something in my eye. I’m definitely not crying. (Totally crying!) And you’ll probably get something in your eye too after watching this year’s holiday ad from Disney.

Our team here all had thoughts about this ad. Julia shared: That ad — oh, the waterworks were flowing, especially since my daughter hasn’t been able to see her lola (lola = grandmother in Tagalog) for more than a year now because of COVID. Our last time seeing her? Our trip in May 2019 to Disneyland.

John said: Great video. * sniff * We were down with kids to see my Mom in Miami on her 90th 3 years ago, were in Orlando last year about to head down to see her and were chased away by the hurricane. At best we might see her next summer, but at this point I don’t feel too optimistic about our traveling anywhere.

And James said it perfectly: I was an absolute wreck watching that ad 😭

Disney announced another shake-up to the studio’s release calendar. They have postponed both Ryan Reynolds’ Free Guy and Death on the Nile, the follow-up to The Murder on the Orient Express. Hopefully we can get back to being able to visit movie theaters here soon so these can be released.

A brand new Disney+ film is coming out called Godmothered. It will be a holiday film, which stars Jillian Bell and Isla Fisher and it will premiere exclusively in December. The premise finds Jillian playing an “inexperienced fairy godmother-in-training” but her profession is facing extinction. The film hits the streaming service on December 4 and definitely sounds like it will be interesting. Will you be adding this to your must watch list?

Dani will be. She said: I am all for silly, simple holiday movies. Noelle was cute and fun, hopefully this movie will have a similar feeling.

James also thought: Every year, you can expect the studios to release some new holiday content, and it’s always fun to see what they come up with. Godmothered looks like it has potential to be funny and heartwarming, which is just what the doctor ordered these days, and I’m looking forward to checking it out!

WandaVision – the more I hear about it, the more interesting it sounds. I love the fact that they filmed in front of a live studio audience. It’s going to make the whole thing even more unique. Entertainment Weekly learned more about the show and I get more and more excited about January 15. What about you?

Could Dwayne Johnson be back in the Scorpion King sequel that could be coming. Universal is developing a reboot of the 2002 film, The Hollywood Reporter has confirmed.

This one however, this one….I may be down for. Dr. Seuss’ The Grinch Musical! is coming to NBC with Glee‘s Matthew Morrison filling the title role. (Ok….I see you NBC.) Unlike previous musicals, The Grinch will not be performed live; instead it will be a two-hour production that will be filmed at the Troubadour Theatre in London and will air on Wednesday, Dec. 9.

What did we miss? Attach your ideas to a Hogwarts Express Ornament and send it to blog@touringplans.com with the words “In Case You Missed It” in the subject line.