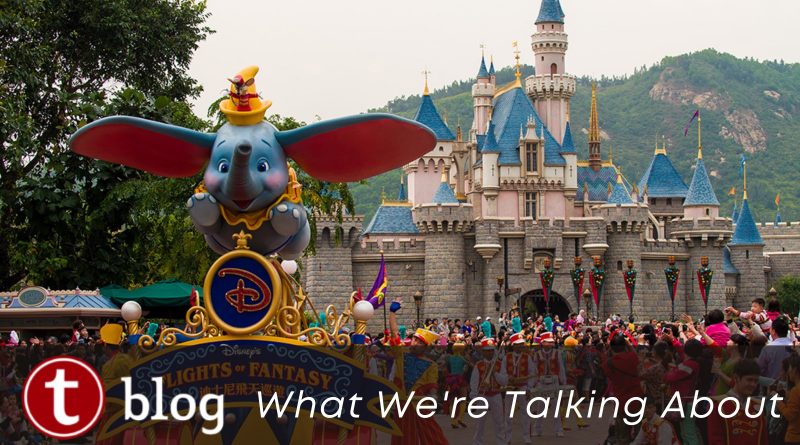 Featured Series
September 25, 2020September 24, 2022 Rikki Niblett 0 Comments In Case You Missed It, What We're Talking About
Share This!

This week, we find out what you need to watch this weekend on Disney+, especially for park fans, see what Gerlyn has to say about the unfortunate news for Hong Kong Disneyland, and what thinks of the news about Black Widow being delayed, once again.

This is a major blow to Hong Kong Disneyland. According to Bloomberg, the resort lost an option to expand its site after local authorities decided not to renew an agreement to develop a neighboring plot of land. While Disney will still be able to invest in the current property, not having that extra land certainly isn’t a great thing.

Gerelyn shared: Hong Kong Disneyland is not going to be able to renew their land rights to expand. This will restrict their growth but they have committed to expand within the existing park by adding one new attraction almost every year through 2023. This should be interesting to see how they invest their current land.

While I’m trying to avoid most spoilers on this attraction, because someday I’d like to get to Tokyo Disneyland, a video of the new Beauty and the Beast attraction got posted to Twitter and the internet rightfully lost their minds. Um….I don’t know about you, but watching Belle and the Beast waltz is pretty darned amazing.

I am gonna be honest. I miss cruising. And maybe we are one step closer to being able to do so as the Cruise Lines International Association has come up with some mandatory core elements of health protocols that must be implemented and followed. If these things were implemented, would you feel comfortable getting on a cruise ship again yet?

We’ve got this weekend’s activity all planned! I don’t know about you, but I plan on having the new Magic of Disney’s Animal Kingdom fired up, which is an original National Geographic documentary that is narrated by Josh Gad and as Disney claims, you are welcomed to a place where wonder meets the wild.

Also, if you want to watch a combination of really unique Disney theme park content, here are some fantastic TV theme park specials from the past that are all on YouTube. I don’t know about you, but I’m intrigued. Which are you going to watch first?

The reshuffling of Disney films continues, as a number of films, including Black Widow will be pushed back. Now you won’t be able to see Black Widow until May 2021, a year after it was originally supposed to debut. Take a look at the full slate of what’s moved and what’s staying here.

Well, I don’t know about you, but I certainly wish that Genie would grant me one of these shirts! A t-shirt from 1992 that features the Genie sold for a whopping $6000! (Oh by the way, the individual originally bought the shirt for $500….I should really see what I have in my closets.) Take a look to see what the shirt looks like. (And hey! Maybe you have it in your closet and can make a pretty penny off it!)

Debuting this weekend during the Emmy Awards was the first trailer for WandaVision which will be airing on Disney+ later this year. It certainly looks like it will be interesting. The show stars Elizabeth Olsen and Paul Bettany, and it will officially be the first series from Marvel Studios that streams exclusively on Disney+. The series is a blend of classic television and the Marvel Cinematic Universe in which Wanda Maximoff and Vision—two super-powered beings living idealized suburban lives—begin to suspect that everything is not as it seems.

Julia let us know her thoughts about the trailer: I’m probably on the planet farthest removed from superhero movies. I don’t think I’ve seen any in. . . . more than 10 years? But I’m so excited for WandaVision because it doesn’t look like a superhero thing where guys with crazy powers save the world. It looks quirky, and I’m all aboard for that!

What did we miss? Attach your ideas to this awesome Pixar Popcorn Popper and send it to blog@touringplans.com with the words “In Case You Missed It” in the subject line.