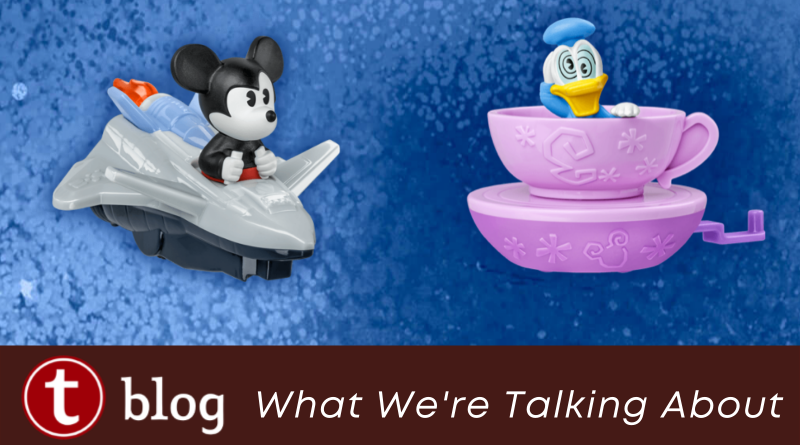 This week, see what Ivonne has to say about the Ratatouille musical, Joe reflects on Joe Rohde retiring, and Julia shares why she just doesn’t understand the McDonald’s Happy Meal toy craze.

I am so sad that I have to share that Imagineer Joe Rohde is retiring. While there are many wonderful Imagineers, it is because of Joe’s masterfully detailed projects that I am able to feel that I am places I may never get to visit. (Hello….looking at you random alien planet, Pandora.) A true Disney legend and trust me, when I say he will be missed.

Our own Joe shared Joe’s legacy at WDI is vast and wide, he’s way more than just Animal Kingdom. He’s had his fingers in the 1980s re-do of Disneyland’s Fantasyland, Pleasure Island, Epcot, and more. You have likely seen dozens of examples of Joe’s scenic and atmospheric work in attractions for decades and never knew it. I wish Joe the best in retirement and cannot wait to see what the next generation of Imagineers step up to the table to deliver.

Have you been watching the latest craze? A Ratatouille musical is working its way around TikTok with songs, choreography, costume design, and so much more. And this week, even Disney got in on the fun with their own addition.

Ivonne says I’m so happy to see Disney embrace the Ratatouille musical! I have watched all of songs on TikTok that people have composed for it and my favorite thing about the platform is how easily people can collaborate with one another and I love that Disney themselves have added to it. Touring Plans just recently just started an account and I’m looking forward to seeing what we can create. Follow us on Tiktok @touringplans

In pure speculation news, Disney may be offering rated R movies on Disney+, at least according to an article from The Washington Post. Now…the article does bring up a few additional notes that would also be helpful for Disney+. I’m curious what you think of them.

Oh boy, Disney+ subscribers. Taylor Swift dropped a huge surprise on the streaming platform. Folklore, a concert film is now available where Taylor performs her latest hits in an intimate setting. Are you going to be watching?

So…..apparently there was a bit of a boo boo with the McDonald’s Disney Happy Meal toys. Apparently the QR codes didn’t work correctly, which means that the restaurant had halted giving their customers the toys. New toys are coming, if they haven’t already been delivered to your local McDonald’s, that don’t include the QR code. As for me…I was able to score 4 of the toys before the recall, and they are still in their packages, WITH the QR code….I wonder how much I could sell those for on eBay…..hmmmmm…….

Julia shares her hot take about this whole thing I don’t get the appeal of the Happy Meals toys for kids (or adults). Every Happy Meal toy that came in our house ended up played with for part of the day and then is retired in a junk box. The Disney ones are cute compared to some of the pretty hideous Happy Meal toys that have come through over the years, but if I suddenly get inspired to have the collection, they’ll be sold by the hundreds in flea market and thrift store grab bags for $1, so I’ll wait until then.

Universal Orlando Resort is offering a fantastic deal to put under the tree! Get 3 days free when you buy 2 days. Seriously….if you’ve ever considered a trip to Universal, this is a great offer.

What did we miss? Attach your ideas to a Universal Studios Retro E.T. Ornament and send it to blog@touringplans.com with the words “In Case You Missed It” in the subject line.