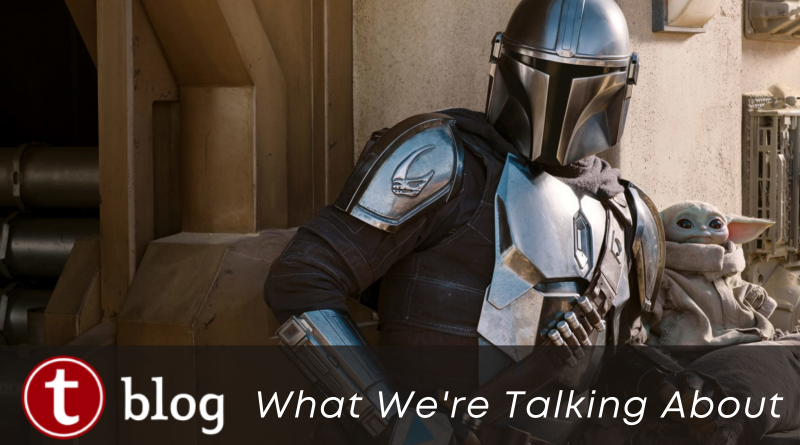 We’re mixing things up here with In Case You Missed It! First things first….you know them….you love them….the team here from TouringPlans is going to weigh in on some of their thoughts of the articles of the week! So, get ready….they have a lot of thoughts. (Well….most….maybe not Derek. Just kidding Derek!)

This week, we take a look at the newest trailer to feature The Child and learn what Brian has to say about the upcoming season, find out what film might be released to Disney+ like Mulan was (and see why I’m disappointed), and learn Derek’s thoughts on the new Mickey Mouse series for Disney+ and more.

The OC Register shared an article this week discussing the fact that Disney (and many others) are ready to get back to things in the state of California, as a trade organization representing the company and others has called on Governor Gavin Newsom to reopen California theme parks this week, as it was the six-month anniversary of the coronavirus closure of Disneyland.

James shared his take – “Well, they can ask, but you may recall that Disney actually announced an earlier plan to open Disneyland in July that basically got a pocket veto from the state because it apparently declined to even act on it, opting instead to focus upon the surge in cases California was seeing at the time. With that said, cases have calmed down since then in the area, the Florida parks seem to have demonstrated that there are ways to operate a theme park in a safe and responsible fashion during a pandemic, and hopefully that will put the state in a position to at least offer some guidance on when things can reopen. There’s been a lot of activity at the Disneyland parks lately, so it seems like Disney is expecting to get the green light sooner than later as well. Fingers crossed!”

This article from the Orlando Sentinel is just one of those melt your heart stories. This little girl, Harper Mae, who was born with spina bifida, is building muscle to help her walk better as she makes her way around the theme parks at Walt Disney World. Take a look at the awesome way she gets around too!

In news that makes me very sad, Disney is considering moving Soul to Disney+. Now, one would expect that it would be the way that they did it with Mulan, where you would get premium access first, but still, I was really excited about the film and hoping that I would be able to see it in theaters. I would hate to think that what happened to Onward would possibly happen to Soul, which looks like it’s going to be a lovely, albeit incredibly sad film. Speaking of still being able to see a film in theaters, it does appear that they will be doing whatever they can to make sure Black Widow will be shown in theaters – likely delaying that film’s release date. Click to read the article from Variety. What do you think? Would you prefer if Soul was just put out on Disney+ and how would you like it if Black Widow was delayed once again?

We’re a little over a month out from season two of The Mandalorian! So, I guess 2020 isn’t a completely negative year. Take a look at the recent trailer here and let us know your thoughts about what you hope to see from the upcoming season in the comments.

Brian had his own thoughts of the second season – “I’m very excited for more Mando, as are my kids who are not particularly Star Wars fans. It looks like there will be more mixing of a new story with some familiar sights (to us nerds anyway) which was so successful in Season 1. I mean X-wing fighters! Banthas! Gamorreans! Wee little Yoda!”

Do we maybe have the villain for the upcoming Ant-Man film? According to Deadline, Jonathan Majors, from HBO’s hit series Lovecraft Country may be tapped to play Kang the Conqueror. For those who don’t know, and it is possible the character could be used differently in the movie, in the comics, Kang is a time-traveling entity who had battles with everyone from Thor to Spider-Man to the entire Avengers team. Will be interesting to see if the rumors are indeed true and Kang will be a part of the upcoming movie.

If you love Mickey Mouse shorts, then I have some good news for you! The main mouse will have a brand new animated shorts series for Disney+ that comes out this November 18 according to this article.

Derek has some thoughts about the upcoming series – “The more Mickey on Disney+ the better. This is great news.” Do you agree with Derek?

We have our She-Hulk! Reports are stating that Tatiana Maslaney from Orphan Black is taking the role for the upcoming Disney+ series! For those who don’t know who She-Hulk is, She-Hulk is Jennifer Walters, an attorney and cousin of Bruce Banner, (or the Hulk.) An emergency blood transfusion from her cousin gives Walters her powers, but unlike Banner/Hulk, She-Hulk was able to keep her intelligence and personality when she Hulked out. Definitely sounds like this will be one interesting series once it hits Disney+! Are you anxious for it?

Well, I don’t know about you, but one of my guilty pleasures on Disney+ is Forky Asks a Question. The show is so silly and yet still makes me laugh. So, I’m happy to share that Forky Asks a Question has won the Emmy for Outstanding Short Form Animated Program! If you haven’t caught the series, go watch it now. The episodes are short and so enjoyable!

Um….have you seen video of the cutest non-real dog?! At Universal, they’ve introduced Latte as part of the steampunk character line up for Toothsome Chocolate Emporium! He’s made of cogs and silverware and is super cool, not gonna lie! I don’t know about you, but I can’t wait to see him in person!

What did we miss? Attach your ideas to a  Fleece Throw featuring The Child (gotta get ready for the new season) and send it to blog@touringplans.com with the words “In Case You Missed It” in the subject line.

One thought on “What We’re Talking About: The Mandalorian, The Mouse, and More”