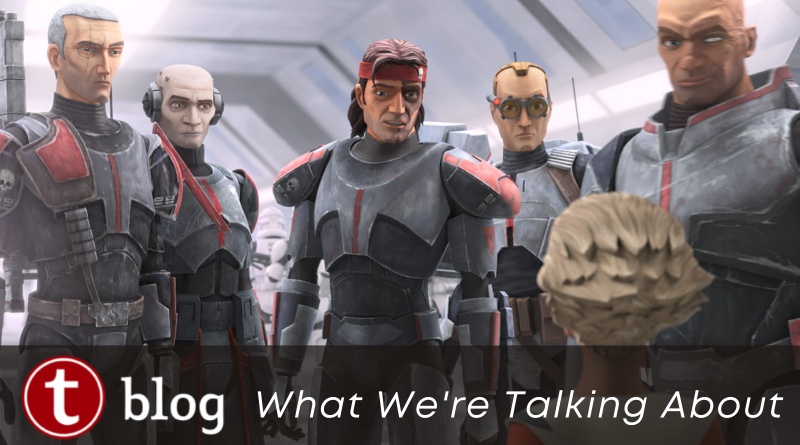 With this week’s edition of What We’re Talking About, Dani shares her thoughts on The Bad Batch, Becky shares thoughts about Pixar films being exclusively launched on Disney+ without premium charges, and a number of us have thoughts on the upcoming Obi-Wan Disney+ series.

The new Avengers Campus set to debut in 2021 at Disney California Adventure. When it does open, it will take inspiration a land that’s always in a constant struggle to remain innovative, futuristic and evolving: Tomorrowland. The Orange County Register takes a look at the new land.

James shares: The cool thing about this is that it really gives the Imagineers an opportunity to do the “future” concept in a way that’s a little more contemporary. I love me some Tomorrowland, but let’s face it, these days it feels decidedly like the future as we envisioned it several decades ago, and is sort of a hodgepodge of concepts.  This should provide a chance for a more modern, cohesive interpretation of “the future” in a context that’s a bit more relatable (and, hopefully, easier to keep current going forward).

It’s something that even I find unusual. Disney is releasing a number of films, including the recent Raya and the Last Dragon on Disney+ with extra cost access….so why do Pixar films keep getting the short end of the stick and just get regular releases on Disney+? What do you think about this move? Pixar seems to be the only one with this pattern so far.

One of our newer bloggers, Becky, shares her thoughts: I’d love to know how Disney makes decisions regarding which movies release free and which are premium charges on Disney+. I get that if every new release was an upcharge, they’d get pushback from consumers wondering why they have to pay monthly and for every new release. But the pattern so far on what gets released for free does seem skewed toward “negatively” impacting Pixar.

The latest animated Star Wars series debuts soon on Disney+. We got a better look at what to expect from Star Wars: The Bad Batch courtesy of a brand new action-packed trailer. What do you think?

Dani is thrilled about this upcoming show: Very excited for this! My husband and I loved the episodes of Clone Wars with the bad batch.

This week, we got to see who will be in the upcoming Obi-Wan Disney+ series and the cast looks stacked! I’m not really a Star Wars fan, but seeing all this has me excited.

Dani is: So so so excited for this and I pray to the Force that this series is as good as the animated Star Wars series, like Rebels, and the Marvel series.

Becky says: I’m very badly tempted to not want to give Hayden Christensen a second chance. He may be my least-favorite actor in any Star Wars movie. But I have to hope that this ends up as good as the Mandalorian and it changes my opinion of him. I am glad that seemingly background actors from the prequel trilogy (Joel Edgerton, Bonnie Piesse) get another turn.

What did we miss? Attach your articles to a Mickey Mouse Denim Skirt and send it to blog@touringplans.com with the words “In Case You Missed It” in the subject line.