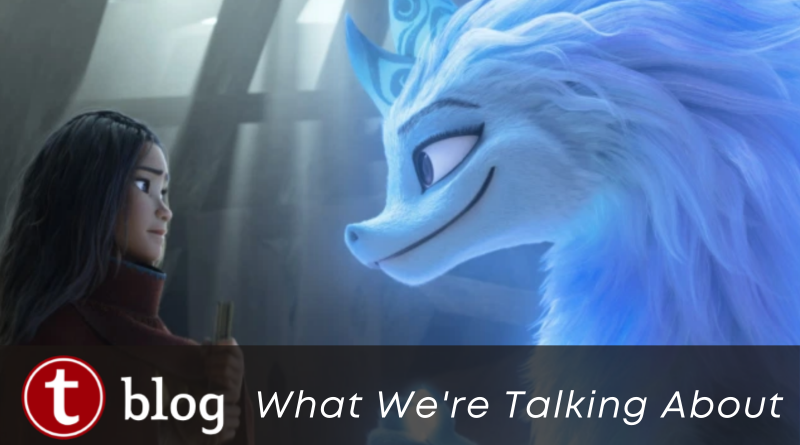 With this week’s edition of What We’re Talking About, Julia talks about the closure of Disney Stores, Dani discusses if she’ll be buying Raya and the Last Dragon, and we have so much more.

I cannot say I’m surprised. With the way COVID has changed things, including how we shopped, it’s not a surprise that Disney would want to close a good portion of its Disney Stores. I just hope my local one isn’t on the chopping block.

Julia shares here thoughts: Although it is sad for the people losing their jobs, my thoughts are that COVID accelerated what was already happening in the world of retail. Brick and mortar stores have been on a steady decline for years, giving way to the popularity and convenience of online shopping. One story of 2021 and 2022 will be about all the shuttered or reduced footprints for stores and commercial real estate. Disney is just part of this trend, not unique to it.

The Walt Disney Company recently published its annual Corporate Social Responsibility Report, detailing the Company’s efforts to operate with integrity and to make a positive impact in society using its unique platform. Highlights for the Company’s social and environmental stewardship efforts include its response to the COVID-19 pandemic; increased emphasis on Diversity & Inclusion; and additional focus on the Company’s new 2030 environmental goals. Take a look at the full report here.

One thing that seems certain is that moviegoing has probably changed fundamentally forever. According to Bob Chapek, it is unlikely to completely return to previous patterns. See what he had to say about the shift.

So far, so good for Raya and the Last Dragon. The film currently has a fantastic Rotten Tomatoes score. Will you be watching the film this weekend?

Dani is considering it: This is the first $30 premium DISNEYPLUS movie that is truly tempting me.

You can celebrate the film even more at home by downloading this fun activity pack and listening to the film’s soundtrack.

What’s been boosting Disney+’s success? It may not be what you think. It’s actually surprisingly strong interest from adults who do not have kids at home. I know I fall into that category.

The Epicness continues! That’s because Universal’s Epic Universe is back baby! Construction is resuming immediately on this fourth theme park for the resort.

What did we miss? Attach your articles to a Disney Parks Dome Tumbler with Straw by Jerrod Maruyama and send it to blog@touringplans.com with the words “In Case You Missed It” in the subject line.

One thought on “What We’re Talking About: Raya and the Last Dragon, Disney Stores, and More”