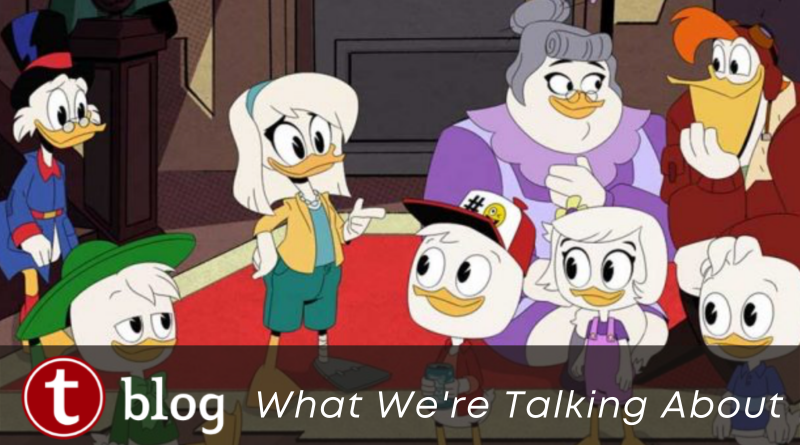 This week, Joe (and the rest of us) are in awe over Super Nintendo World, Dani shares her opinion on Disney+ since it won some accolades this week, and Julia talks about the ending of DuckTales.

Have you wanted to listen to Tokyo Disneyland’s “The Happy Ride With Baymax” music? Well, now you can on Spotify!

In a move that is truly fitting, Entertainment Weekly has named Chadwick Boseman as one of their Entertainers of the Year. And did you see that in honor of Chadwick’s birthday, on Disney+ they updated the Marvel intro to feature only Chadwick?

Dani stated Chadwick Boseman definitely deserves every bit of recognition. His presence will continue to be felt for generations despite being gone too soon

Did you catch the Disney Holiday Singalong this week on ABC? If you missed it, catch it here. What was your favorite performance?

DuckTales will be ending with its third season. The reboot has been airing on Disney XD and its final episodes will likely be airing in 2021. Will you miss DuckTales?

Julia shares her take on this ending It is astonishing how much was accomplished in the DuckTales reboot in just a few seasons. I’m a big fan of shows going out on top instead of going “just one more season” and failing spectacularly. (I’m looking at you Once Upon a Time….) It feels like there’s still more story that could be shared, but maybe they’ll save that for a Darkwing Duck series?

Disney+ has officially been named as one of the best apps of the year, according to Apple. Disney+ was the third most-downloaded free iPhone app of the year globally, behind Zoom and TikTok, and the second free iPad app after Zoom. It also was a top download on the Google Play store, as it was voted as number 1 there.

Dani has some interesting thoughts about Disney+ Oh Disney+! We use Disney+ a LOT in our household, between Disney Junior content, Star Wars, and The Simpsons. I love the Halloween and Holiday Collections. But boy the user interface still needs lots of work. It’s gotten a lot better over this year considering how bad it was in the beginning. But it still has some work to do to catch up to Netflix’s user friendliness.

Such sad news this week, as the world lost another Star Wars great, with the passing of David Prowse. For those who don’t know, he was the actor who actually played Darth Vader. (Of course, the character was voiced by James Earl Jones.)

It’s hard to believe it’s been 10 years since the Wizarding World of Harry Potter debuted at Universal Orlando Resort. And according to Universal, they aren’t done with the wonderful, immersive world yet. There are still stories to be told. And I have to say, bring it on! Cannot wait to see how else Universal wows us with this franchise.

If you have not seen what Universal Studios Japan has built for their Super Nintendo World, which opens February 4, 2021….stop what you are doing and take a look. It is INCREDIBLE. Like I’m talking next level bonkers. I cannot wait to see what we’ll eventually get stateside. Granted, it may be a while now, but still….it’s going to be insane.

Joe shares This will likely have me shunned from the theme park community, but we haven’t seen a property this big being added to theme parks since Potter. This land looks incredible and will tap into a market that so far either doesn’t go to Universal or doesn’t visit theme parks. I believe Mario Kart will just bowl people over with being super fun and technologically advanced. I can’t wait for this to open in Hollywood soon and Orlando after that.

What did we miss? Attach your ideas to Disney Parks Wishables: Magic Carpets of Aladdin series which benefits Make-A-Wish and send it to blog@touringplans.com with the words “In Case You Missed It” in the subject line.