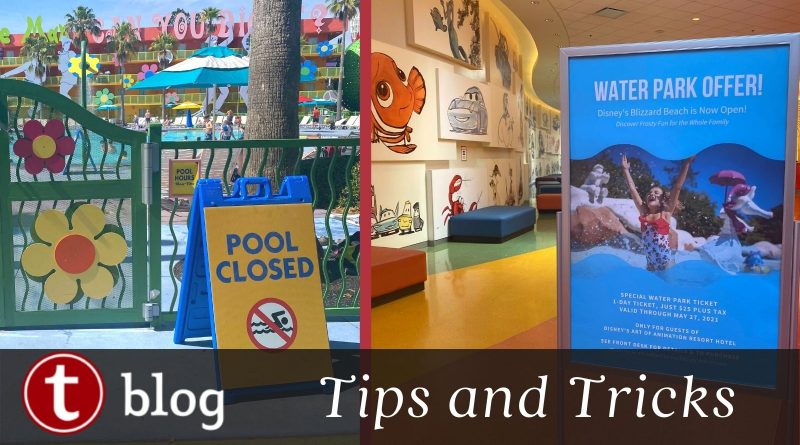 The Value Resorts are a popular choice for many families vacationing at Walt Disney World. For many guests they satisfy the desire to be on Disney property, with magical Disney touches, while staying in budget. But, there are some things you need to know if you’re staying at Disney’s Art of Animation Resort or Disney’s Pop Century Resort anytime soon.

Here’s what you need to know about staying at Art of Animation and Pop Century:

During spring break, and upcoming summer, Disney hotel pools are more popular than ever. Currently the Big Blue Pool at Art of Animation is closed for refurbishment. Disney’s website states it is closed through early April 2021. But, in the Art of Animation lobby there is a sign advertising a special offer for Art of Animation resort guests only.

One-day water park tickets to Disney’s Blizzard Beach are just $25 plus tax for Art of Animation guests. This is about one third of the regular price. The sign indicates the effective date is through May 27, 2021. Usually Disney extends this type of offer to hotel guests when the main pool is closed for refurbishment.

While the Big Blue Pool is in refburhsment, you may want to consider requesting a room that is not near this area, due to noise and not-so-great views. Use our Room Finder for help selecting the room that best fits your needs.

Also in pool news, the Hippy Dippy Pool at Pop Century has been closing due to capacity as Spring Break crowds look for a midday pool break. When I visited the resort this week signs that read “Pool Closed” were located all around the perimeter of the pool. A Cast Member was stationed at the main entrance of the pool. I witnessed them asking a family trying to get into the pool area how many were in their party, and as another party left asked them what general area they were seated.

We’ve seen reports of Disney’s Coronado Springs resort main pool closing during peak times too, but they have a nifty text notification system. The quiet pools at Pop Century and Art of Animation, and the water playgrounds, are open as normal and so far not seeing any capacity issues. And speaking of playgrounds, the resort hotel playgrounds are open, though theme park playgrounds remain closed.

As you can imagine there are long lines for Disney Skyliner in the morning before park opening. Disney has signs placed indicating they have extra buses to Hollywood Studios and EPCOT. After the morning rush there are no lines. Park hopping hours of 2:00 p.m. can get a little busy at the transfer station of Caribbean Beach, but nothing compared to the morning rush. Closing time for the parks can be busy too, of course.

The menus at Landscape of Flavors and Everything POP have been scaled back, like many dining locations throughout Walt Disney World. And you’ll need to utilize mobile ordering. If you need any customization on your order you’ll need to speak with a Cast Member at the registers.

So that’s about everything that’s new and recent at Disney’s Art of Animation and Disney’s Pop Century Resorts. Will you be staying anytime soon?