Frozen first hit movie theaters in the fall of 2013, but legions of fans (and Disney’s entertainment department) don’t seem ready to “Let It Go” anytime soon, as we enter a second annual season of Frozen Summer Fun at Disney’s Hollywood Studios. We were on hand for the the first day of festivities, which will celebrate the CGI snow princess and pals every day through September 7.

The first Frozen Summer Fun attraction I attended was the new Frozen Royal Welcome, which runs twice a day (currently 10:30 a.m. and 1:30 p.m.). It isn’t quite a full fledged parade on the scale of Paint the Night, but boasts far better production values than the typical Hollywood Studios motorcade we’re used to seeing at special events. 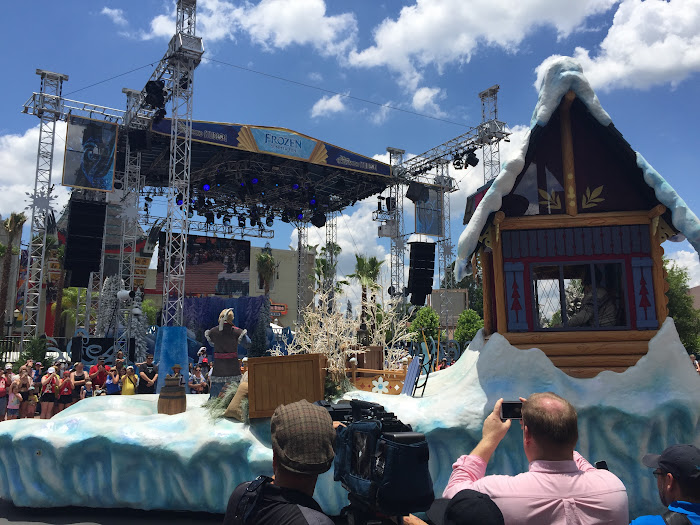 The Royal Welcome features a carriage for Anna and elaborate floats for Olaf, Kristoff, and Elsa — all of whom are accompanied by an array of themed attendants marching (or rollerblading) to the familiar music. 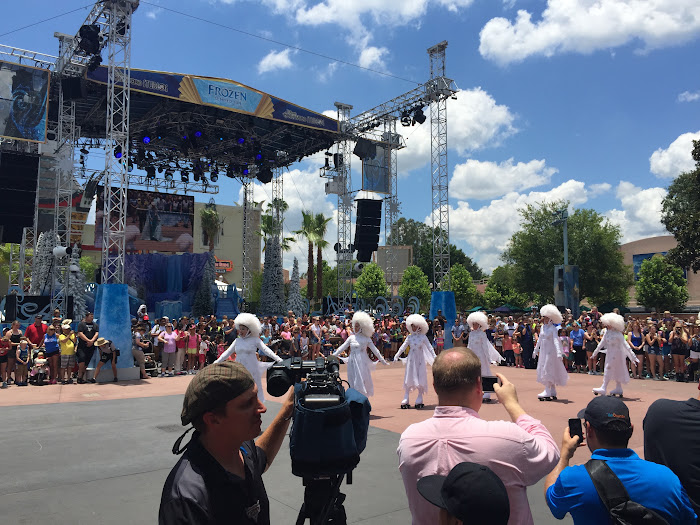 Here is a video excerpt of the parade, shot from near the front of the park. Use it to get an idea of what the Royal Welcome looks like, but be aware that I missed the opening segment with Anna (my iPhone overheated in the sun), and Elsa’s finale float did not appear in this performance due to technical difficulties (that’s what you get for building an ice castle in Florida).

As the procession moves along its route between the park entrance and Star Tours, it makes two “show stops” in which the floats halt while the company performs choreography to “Let It Go.” Here’s what that looks like:

You can catch the parade from anywhere along the route — which is clearly marked on park maps — but the trick with the show stops is that you won’t see anything if you are standing in the wrong place. The “wrong place” includes the popular plaza around the center stage, which is at the midpoint of the route. From there, the first show stop takes place long before the parade reaches you, and the second occurs just after it passes by.

Therefore, if you want a good view of the “Let It Go” show stop, the best spots to watch the Frozen Royal Welcome are midway down Hollywood Boulevard or directly in front of the Hyperion Theater exit near Echo Lake. At these points, you’ll be surrounded by the floats and have a good chance of interacting with the characters. During my visit, the Echo Lake area looked like the easier place to access a decent spot at the last minute.

For The First Time in Forever: A Frozen Sing-Along Celebration in the Hyperion Theater

Coinciding with the 2015 Frozen Summer Fun season, the well-received Frozen Sing-Along has been relocated into the newly rechristened Hyperion Theater (a vintage Disney moniker), which was previously home to the American Idol Experience. 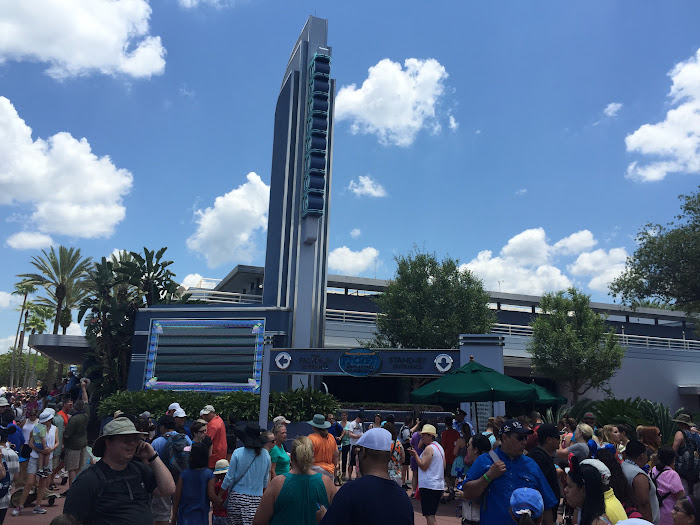 Only 350 standby guests (out of 1000 seats) were being allowed into the holding pen before each show, according to the Cast Members I spoke with. I got into the queue just as it opened, about 45 minutes before an early afternoon performance, and the standby line was cut off by 25 minutes before curtain. However, there were clearly a number of FastPass+ no-shows, as a handful empty seats remained until the doors closed at showtime. If you want see the Frozen Sing-Along without standing in line or spending a FastPass+ on it, and you don’t mind separating your party or having a marginal view, see if you can slip into standby during the final minutes before the show starts. 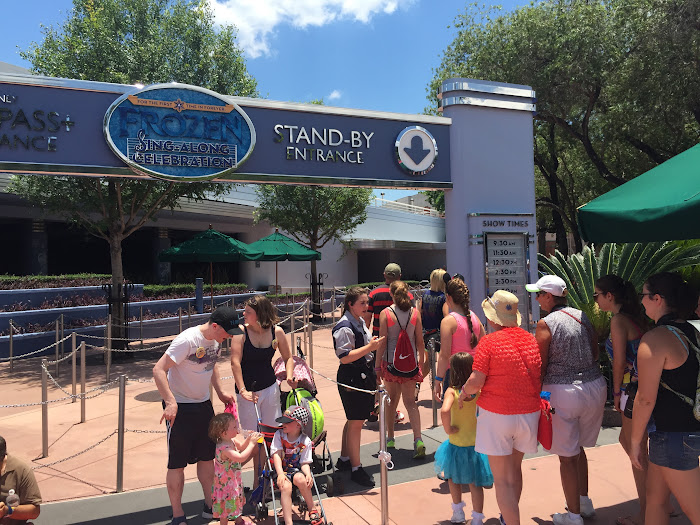 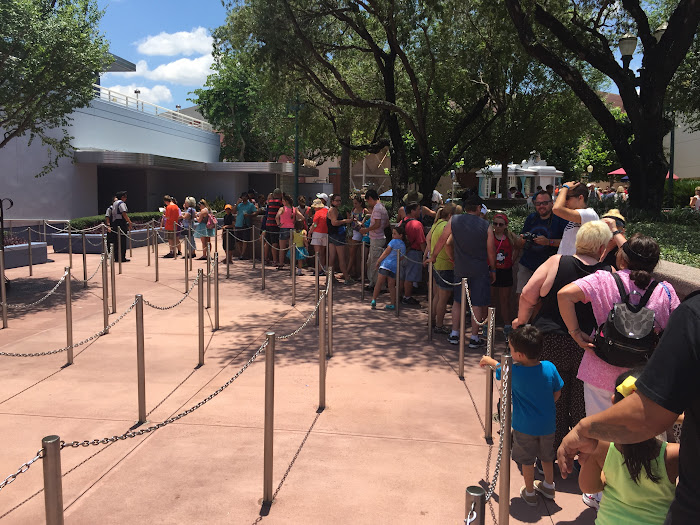 While waiting to enter the main theater, early guests wait in the shaded outdoor lobby and watch overhead televisions screening clips from the Frozen film, presented as “Arendelle History 101”. The editing of the segments is quite clever, but the loop lasts barely 15 minutes, so if you show up when the gates open you’ll see the whole thing nearly three times. 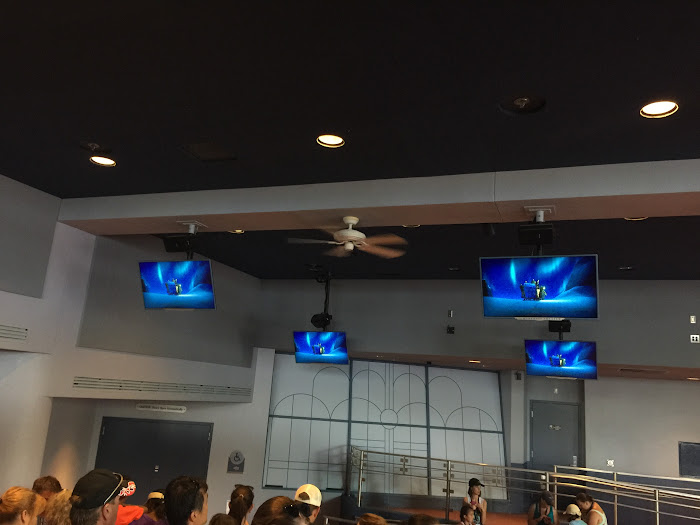 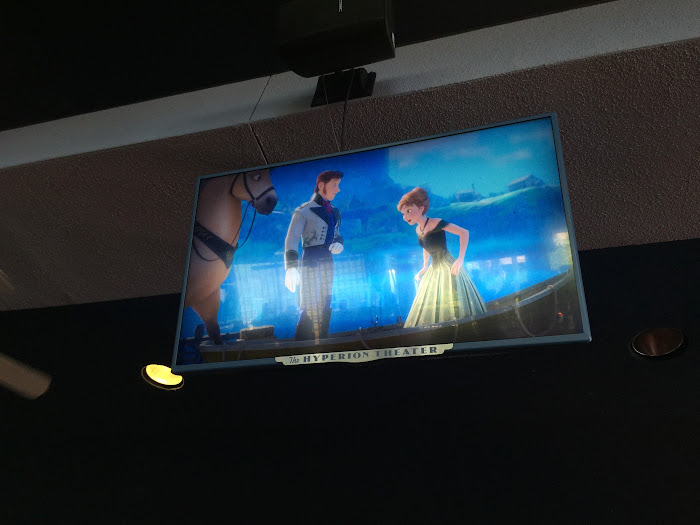 The main show is largely the same as the one that’s been running in the Premiere Theater on DHS’s backlot since the first Frozen celebration, plussed with a more elaborate set, minor tweaks to the script, and some spectacular new lighting and environmental effects. 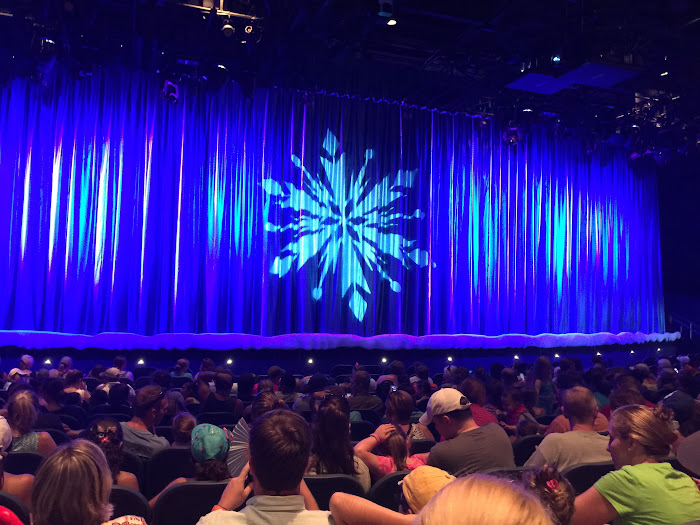 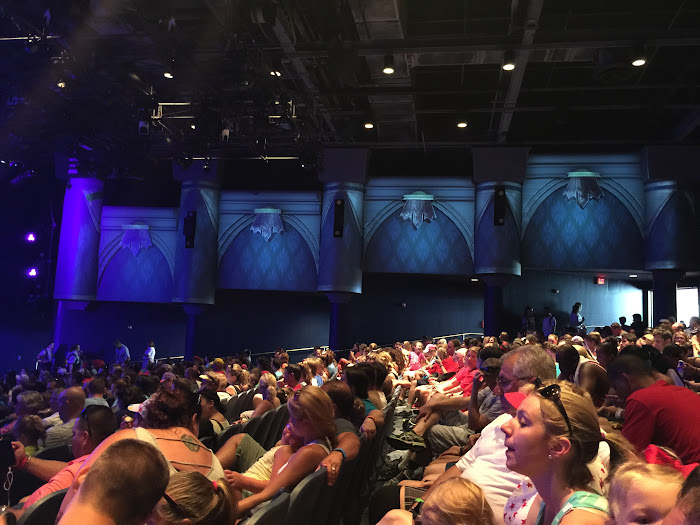 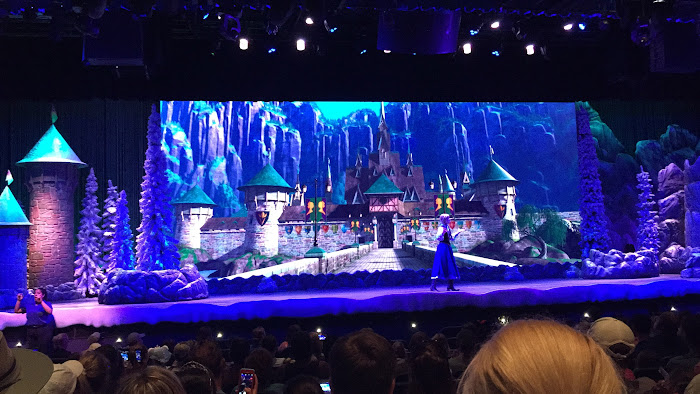 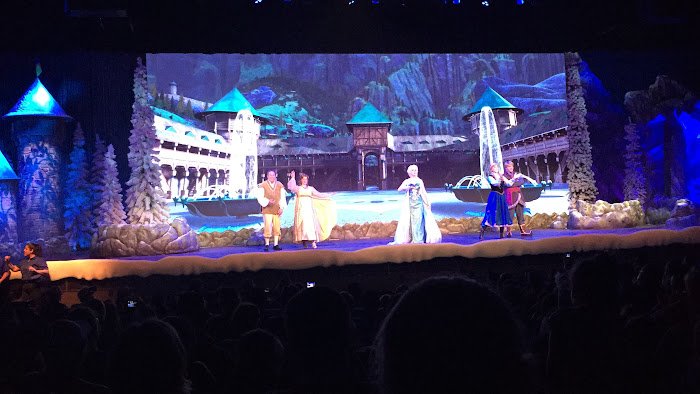 The finale now features a massive flurry of faux snow and video projection mapping that brings the theater walls to life. Having recently seen the similar show at Disney California Adventure again, I can affirm that DHS’s dialogue and performers are still far funnier, and Florida now has even more impressive visuals. 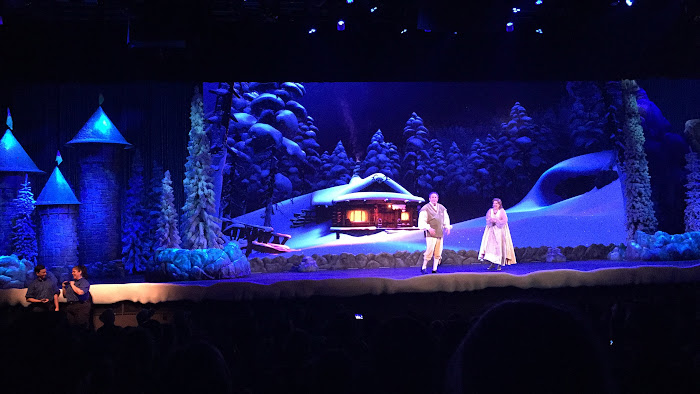 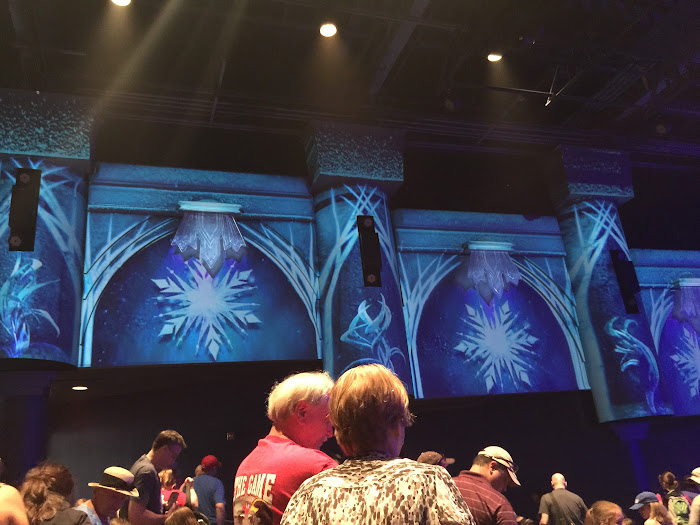 Here’s a video of the full performance, recorded with a wide shot to capture the talented sign language interpreters at the side of the stage (who may be the show’s hardest working cast members):

Olaf’s Summer Cool Down is a slight show starring everyone’s second-favorite snowman (sorry Olaf, but you’re no Frosty) in 10 minutes of audience participation songs and dancing. Our advice is that if it happens to be starting as you walk by, it’s worth pausing for, but don’t plan your day around it. 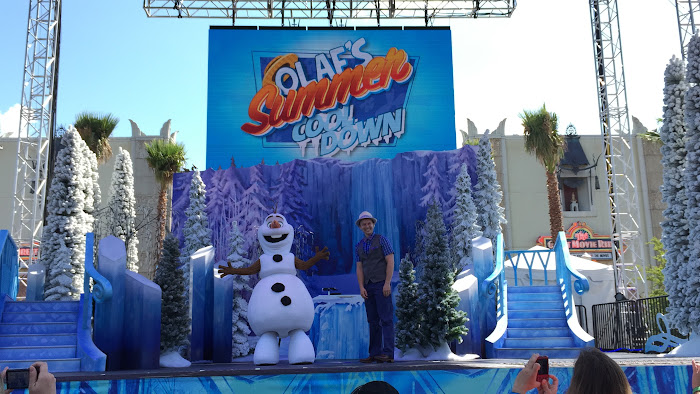 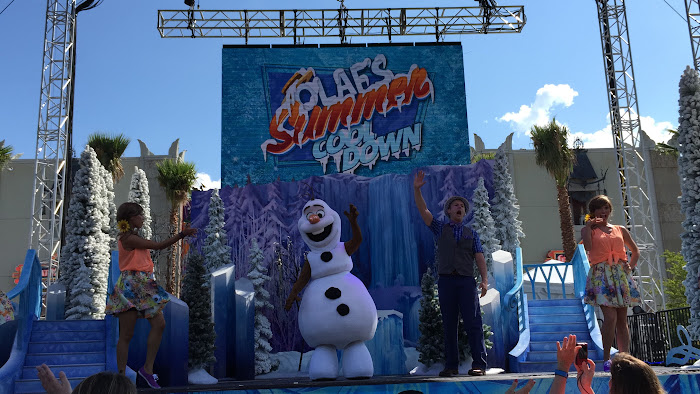 The two best things about the show are the animated Olaf costume, which has a synchronized mouth and moving eyes like the newer Mickeys, and the big blast of cold carbon dioxide fog at the end. Unfortunately, if you stand in the center you’ll miss the namesake icing, so hang to the side of the stage in order to savor the chill.

The ABC Sound Studio, formerly home to Drew Carey’s Sounds Dangerous, is currently screening the short Frozen Fever every 30 minutes on the hour and half hour. The short, which accompanied the live-action Cinderella film in theaters, is preceded by a trailer for the upcoming Walt Disney Animation Studios Short Film collection, and a “bonus feature” of behind-the-scenes footage from Frozen Fever’s recording sessions. 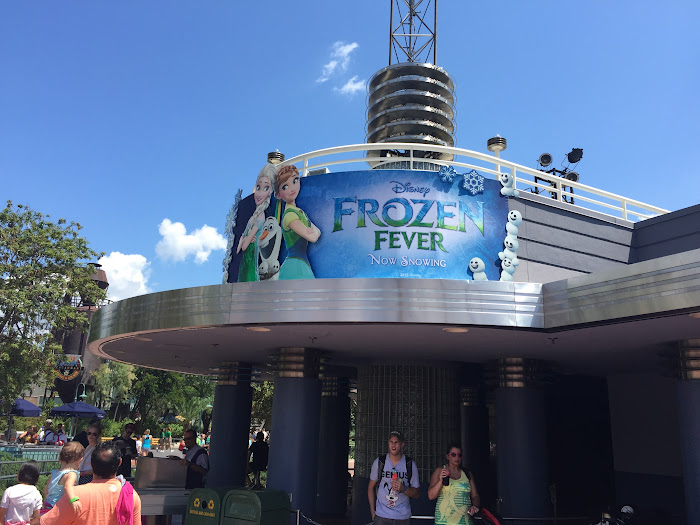 If you haven’t seen it, Frozen Fever features all the original voice actors and a new song by Robert Lopez and Kristen Anderson-Lopez in a birthday tale set shortly after the movie’s events. It has all the elements that made Frozen a hit — witty lyrics, appealing characters, fluid animation — and is a one-time must-see for anyone who likes the franchise. 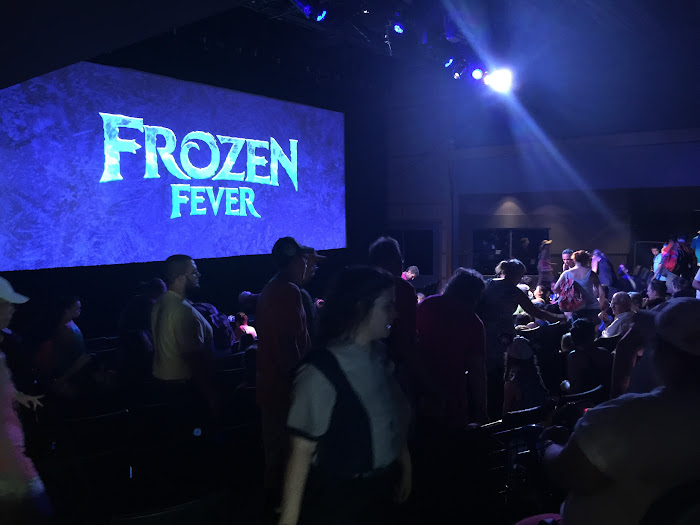 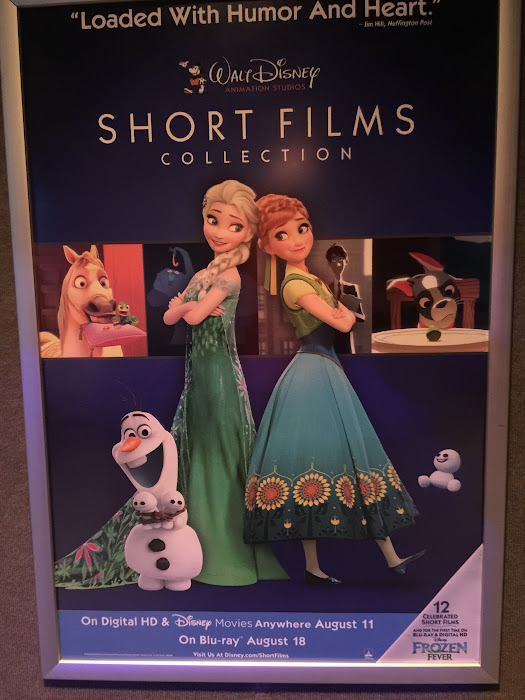 There’s no need to line up for this one, since most screenings seem to be about half full. The digital projector is bright and sharp, but you can see individual pixels from the first few rows so sit at least half-way back.

Also on the Frozen Summer Fun agenda is the Frozen Fireworks Spectacular, currently held nightly at 9:30 p.m. DHS always does a great job when they put on a themed fireworks show, but after a blazing afternoon I discovered what my brain does in summer (hint: it’s a lot like snow) and had to bow out before the big blowoff. 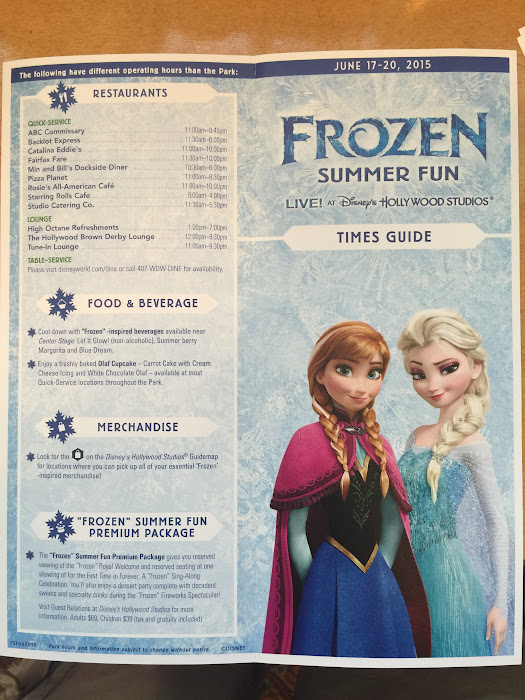 There’s also a Coolest Summer Ever Dance Party at center stage daily before the fireworks. The sun doesn’t set for several hours after the dance party starts; if you can boogie with this heat index, you’re a better man than I… 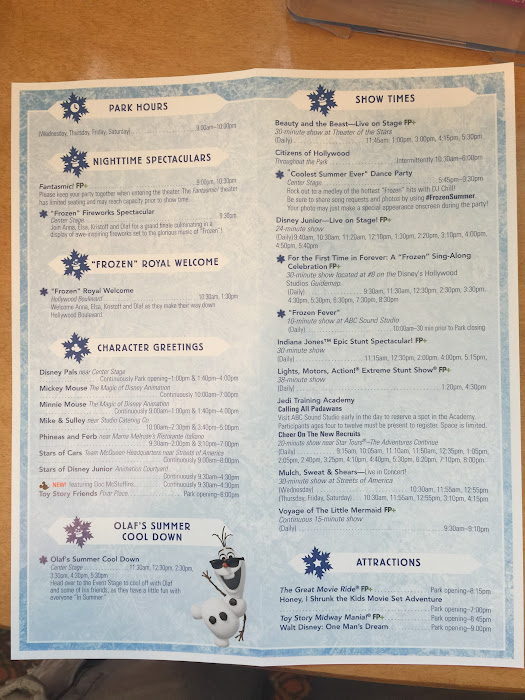 And if all of the above makes you shiver with delight, consider the Frozen Summer Fun Premium Package. For the low low price of $69 per adult ($39 per child) you’ll get reserved seating at the shows and a private dessert party before the fireworks.

Finally if you want to build a snowman,…you’re out of luck. The Olaf-themed snow playground and ice skating rink featured during the first Frozen Summer Fun has not returned. Also, the Wandering Oaken merchandise and snack shop has not wandered back, so you and your family will have to sauna somewhere else. And if you want a meet and greet with Anna & Elsa, you’ll need a ticket to the Magic Kingdom (preferably with a FastPass+ to skip the line at Princess Fairytale Hall) because none of the Frozen characters are available for posed pictures in Disney’s Hollywood Studios.

Have you experienced the new 2015 Frozen Summer Fun yet? Are you looking forward to going? Leave your thoughts in the comments below!