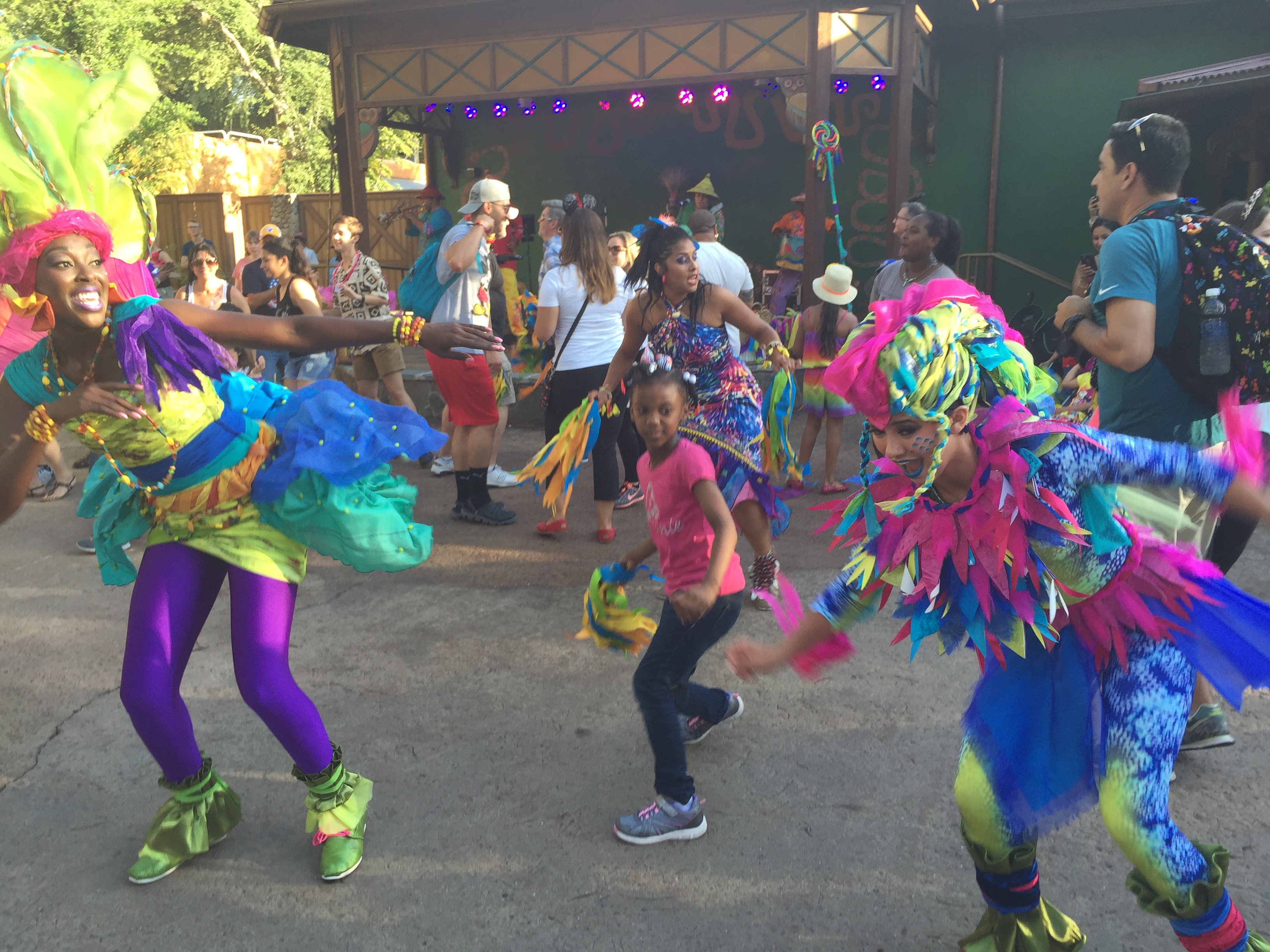 Night has awakened at Disney’s Animal Kingdom. Thousands of guests descended upon Walt Disney World’s youngest park this past week to check out all the new night time entertainment, as well as the new signature restaurant and lounge, Tiffins and Nomad Lounge respectively. I was one of those guests and encountered a view surprises during my adventures in Disney’s Animal Kingdom. Overall, the night time offerings are great additions, as are Tiffins and Nomad Lounge. But there are some aspects that might be a little unexpected to some guests, including myself.

The most discussed component of night time at Disney’s Animal Kingdom is “Rivers of Light” night time spectacular,… and sadly it’s not ready to debut. But of course, some of the merchandise that is not specifically labeled as such did make its debut this weekend. The most notable items are a pair of souvenir cups.

These little beauties light up and change color. One is a collapsible cup that resembles a paper lantern ($12.99). The other is more detailed, resembling an ornate oil lamp ($13.99). It is pretty clear that these were designed to match the style of the Rivers of Light show, however, they do match the Indian style of “Jungle Book: Alive with Magic“. While selling souvenir cups is nothing new at Disney, to say the least, I don’t think many of us were expecting these cups to debut with the temporary Jungle Book show.

Size and scope of Nomad Lounge

Tiffins restaurant and Nomad Lounge are two highly anticipated dining venues that debuted this weekend. Both bring a necessary sophisticated flair to the park; Tiffins especially is a signature experience. We’ll discuss the difference between Nomad Lounge and Tiffins momentarily, but I just have to point out how pleasantly surprised I am at the size and scope of Nomad Lounge. When I arrived I headed left and didn’t even bother going inside. The outdoor, wrap around seating area is the most posh outdoor seating area I’ve ever seen at one of the four Walt Disney World theme parks. Plush sectional couches flank the right side of the porch, while pairs of chairs line the outer rim and overlook the water. These pairs of chairs do not have the most ideal view right now while Avatar’s Pandora is being built. Still, my first Nomad Lounge experience took place in a set of these chairs and I had a lovely time. It was difficult to pull myself away. I observed many families, couples, and groups of friends lingering over their cocktails and snacks, enjoying the quiet, yet sophisticated atmosphere. The interior of Nomad Lounge is larger than I imagined. The outside area seats up to 85, and the interior is at least double that. There is seating at the bar, with outlets and purse hooks – two things that I think are an absolute necessity at a bar.

There are a few focal points throughout the inside of the lounge, including a long table in the center that can host a large group, or act as a communal place for smaller groups. There are banners hanging from the ceiling on which Imagineers share their travel stories. Guests can also share own travel stories and have it displayed in the Lounge, I’ll explain how a little later. The size of the space is also accompanied by a grand scope. There are some great details that make Nomad Lounge a very unique place. For starters, following in the traditions of so many theme park venues before it, the Lounge (and Tiffins) offers the Kungaloosh Spiced Ale, an exclusive brew. This red ale has a distinct spice to it, I detected a hint of nutmeg and perhaps clove. It is brewed by Concrete Beach Brewery in Miami ($8.50). Secondly, the glassware is some of the most beautiful I’ve set eyes on, anywhere. This is especially true for the stunning martini glass that the Night Monkey cocktail ($9.50). This elevated glassware is just one additional way that Nomad Lounge produces an enveloping atmosphere. The food at Nomad Lounge, compared to Tiffins

The thing to remember with the food at Nomad Lounge is it is billed as “small plates” and boy is that accurate. An order of fishballs is $8.00 and comes with just two, though a small sample of shishito peppers. An order of Indian Butter Chicken Wings is $10.00, but only comes with three wings. I ordered the Summer Roll since I was sitting outside, at $7.00 it’s the lowest price item on the menu. One single Summer Roll cut in half. Summer Rolls are known for being light and refreshing, this was indeed the case. The fresh vegetables that fill the roll do change based on what is fresh and available. Right next door at Tiffins you can enjoy full size appetizers. The least expensive appetizer is $11.00, Black-Eyed Pea Fritters, which are a slightly larger serving than the small plates at Nomad Lounge. A better example are the Flash-fried Icy Blue Mussels. At $12.00 these mussels are a good value and a decent serving size, plus the flash-fried process brings out the sweetness of the mussels without a heavy friend coating. So for comparable prices Tiffins serves up larger appetizers than Nomad Lounge’s small plate, which is a surprising concept to me.

When dining at Tiffins lounge your experience is given a fond farewell with a square card featuring a sketch from the father of Disney’s Animal Kingdom, Imagineer Joe Rohde. There are four different sketches and is said to change each week. This is a nice unexpected touch, and something that furthers Tiffins as a signature experience. Over at Nomad Lounge you can add your travel story to the decor. While the Imagineers and select Cast Members have their story proudly displayed on larger banners, guests can purchase a mini-banner / tag that will be hung above the bar. The $0.85 of the $1.00 cost goes to Disney’s Conservation Fund. I loved sharing why I love to travel by taking part in this program. I think it is a great touch! Full disclosure, I love to dance. So I am usually very partial to live entertainment that involves well choreographed dancing as well as an opportunity for the audience to dance along. However, I was not expecting the Discovery Island Carnivale to be as well executed as it is. I initially thought, “oh boy, not another dance party.” However, this is not your typical going-way-overboard with the pop music theme park dance party.

Instead it feels like a mini parade turned block party. The dancers bring an incredible energy to their performance. I noticed each one putting their own personality into their performance and how they interacted with the audience. A live band provides the carnivale style music. The audience is encouraged to join in, and it feels natural doing so, not force or contrived. We are referred to as the “nature family” (hard not to think of Ric “Nature Boy” Flair). I enjoyed seeing so many children dancing along, but also guests of many age ranges getting in on the action. It felt celebratory. The first performance is at 6:00 PM at it feels like a great transition from the day time into the night time. The differences in the night time safari vs. day time

It seems the most anticipated night time offering at Disney’s Animal Kingdom is the night time safari. Overall, Kilimanjaro Safari at night does not feel incredibly different than it does at day. However, there are some differences I did not expect. First, there are a few sound effects in some of the transitions from one landscape to the next. I totally fell for the fake hippo bellowing sound. These sound effects are unnecessary in my opinion, but not overly distracting.

Even though I spent two months (two really fun months) as a safari driver, I did not expect to stop as much as we did. It makes sense though. Visibility is reduced and many of the animals are more active during the night time. On our safari we stopped at least four times, two of which due to an animal crossing the path. Getting decent pictures is quite the challenge, so I encourage you to relax and enjoy the experience. Thanks to social media, I knew about the sunset-style lighting throughout the safari. What I did not expect was the simulated moonlight in the finale area. The cool, pale blue lighting adds a nice touch and a nice transition to the end of the safari.

Speaking of transitioning to the end, the colorful projections onto the Tree of Life are a thing of beauty and a great “kiss goodnight” on the way out of Animal Kingdom. Sadly it did not work out for me to see a full projection show. Instead I was able to see about five minutes worth of the subtle projections that occur every few moments. I was a bit surprised at how subtle some of the projections are. One such projection is of fire flies. It is very subtle and would be easily missed. Though there is beauty in the simplicity. Overall the new enhancements to Disney’s Animal Kingdom are well received. Personally, I am pleased to see my favorite park in a new light. This park can be difficult to enjoy when it is blazing hot outside. At night it is more serene, yet more exciting in some areas. I enjoyed discovering some unexpected elements as well and look forward to my next time time visit to Animal Kingdom.