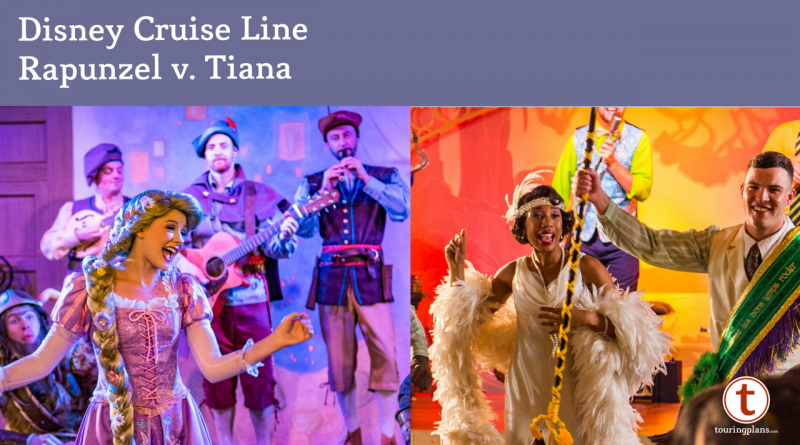 It’s time for a restaurant showdown, Disney Cruise Line style!  Today I’m going to compare the two newest (and two of the best) restaurants on board – Tiana’s Place on the Disney Wonder vs. Rapunzel’s Royal Table on the Disney Magic.  Let me start by saying I think both of these restaurants are very well done.  I mean really, really well done.  I’d eat in either one of them tonight.  And tomorrow night.  And the night after, and … well you get the idea!  But let’s compare them!  In fact, let’s compare 10 things about them. 1. Entrance – Disney could easily make the entrances to their restaurants just an extension of the beautiful hallways in the ships themselves, but that’s not Disney’s style. Disney created two fully themed entrances to Tiana’s and Rapunzel’s. Tiana’s entrance looks like a New Orleans French Quarter courtyard, with beautiful brick walls, and Mardi Gras necklaces hanging from the “balconies” above.  There’s a giant poster advertising the band of the night, which we will talk about later!  Rapunzel’s entrance is a little plainer at first glance, but the details bring it to life.  There’s a red carpet to welcome you, the ceiling has grand arched beams, and even the trash cans are themed like barrels.  The walls are decorated with wanted posters and a grand birthday invitation to celebrate Rapunzel’s return home.   Verdict – Tiana’s.  While I give bonus points to Rapunzel’s for placing some Tangled artwork in the halls outside the restaurant by the elevator, I’m partial to Tiana’s entrance.  Those brick walls are spectacular and remarkably immersive. 2. Overall Theme – Here we are comparing a New Orleans Supper Club to the Kingdom of Corona! Once you’ve stepped through a New Orleans courtyard to get inside Tiana’s, you’ll feel like you stepped onto the back porch of a beautiful Southern mansion. The tables are set with green tablecloths and white wicker chairs.  The columns inside are adorned with wood shutter decorations.  The wrought-iron chandeliers are painted light colors, some with a frog and lily-pad theme.  In a really neat touch, the curio cabinets along the front of the restaurant are full of nods to the movie.  Corona, on the other hand, is full of wood touches and the color of royalty – purple.  Each chair is decorated with a Golden Flower engraved at the top of the wood.  The walls feature wood cut outs resembling castle walls, as well as hand-painted murals reminiscent of Rapunzel’s own murals in her room.  I also love the flickering lantern lights in Rapunzel’s!  They’re offset by some beautiful iron chandeliers.  Another wonderful detail is the hidden Pascals!  There are three life size Pascals tucked in among the rafters, just waiting to be spotted.  Verdict – Rapunzel’s!  Although I like the lighter colors of Tiana’s, I’m a sucker for a castle theme. 3. Uniforms – Of course the servers all got new uniforms (costumes?) for the new restaurants. The female servers in Tiana’s were the unlucky ones here. The male servers and assistant servers got nice yellow shirts and dark pants.  Head servers got light green shirts with cream vests.  The female servers got the yellow waitress dress that Tiana dons in the film.  You know the one.  The one that looks suspiciously like a mousekeeping uniform at Walt Disney World.  With very sensible shoes.  Ouch.  In Rapunzel’s, just about everyone is wearing a white shirt with a deep purple vest over it.  Verdict – Rapunzel’s.  It’s the clear winner here! 4. Show – Tiana’s was the first restaurant on board a Disney ship to feature live music. I was wholly skeptical, but it blew me away! Live music creates such a great atmosphere!  It’s unlike any other dining room atmosphere on board.  Tiana’s has the Crawfish Crooners, who play a great blend of jazz and blues.  During dinner, Tiana herself appears and makes her way through the restaurant to greet guests.  Louis, the trumpet-playing alligator, also shows up, trumpet in hand!  There’s a festive parade around the restaurant with the servers, and the servers pass out Mardi Gras beads to the guests to complete the atmosphere.  It’s so well done!  Over at Rapunzel’s, there is a band of three minstrels playing, but they are frequently accompanied by the Snuggly Duckling Thugs!  The Thugs sing, wander, and interact with the guests.  They are a great addition to the show.  Rapunzel and Flynn Rider appear at some point and make their way through the crowd spending a little time at each table.  There’s also a parade with the children, and lots of general merriment as one would expect.  For the high point of the show, Rapunzel and Flynn join the Thugs and musicians and sing (of course) “I See the Light.” As they sing, the lights are dimmed and the servers make their way out into the dining room carrying lanterns.  It’s really beautiful!  Verdict – Rapunzel’s.  This was a super close one.  I love both shows, but I’m a big fan of the music of Tangled, so it would be my pick. 5. Menu – For this one, we aren’t comparing what’s actually on the menu (we’ll do that below). We are comparing the actual menus themselves! Menus are another thing Disney could do on the cheap, but they don’t!  In Tiana’s, the menu features artwork taken directly from the movie!  But the dessert menu is the highlight.  It’s a beautiful scene of Tiana and Prince Naveen (in frog form) in the swamp, and Ray the firefly shining some light on them.  Real light!  The fireflies on the menu actually light up!  So cool!  Over in Rapunzel’s, the dinner and dessert menu both feature paintings of the lanterns floating past the kingdom of Corona.  The children’s menu is the brilliant idea here – it rolls up like a lantern!  So each child has a lantern to take home!  So smart!  Verdict – Tiana’s!  Light-up menus win of course!  Assuming Disney keeps replacing those batteries! 6. Dishes – The dishes in both of these restaurants are adorable. I will pay serious money for any of these if they should ever decide to sell them in the gift shops! At Tiana’s, everything is frog and lily-pad themed, which on the surface doesn’t sound very appetizing, but it’s super cute! The bread basket is gold and lily shaped, and there are lily-pad placemats on the table.  Naveen is painted on to the dinner plates, and the bread plates have a small splash painted on, like Louis may have jumped off his plate and into the water on the others!  That’s theming at its finest, my friends.  Rapunzel’s dishes reflect a more royal theme of course, with ample use of the Golden Flower from the movie.  The napkin rings are engraved with the Golden Flower, the bread basket has a giant Golden Flower base, and the plates themselves have a floral theme.  The glasses are clear goblets which I loved!  And the fry-pan dessert in an actual fry pan is adorable.  Verdict – Tiana’s.  You can’t beat those plates! 7. Drinks – It’s dangerous territory for a teetotaler such as myself to comment on drink menus, so I will be leaning heavily on reviews from friends. Both Tiana’s and Rapunzel’s have pretty extensive drink menus which fit right in with the theme. At Tiana’s, there’s both a rum flight and a selection of Louisiana beers.  The drink menu in Rapunzel’s has a wine flight to go along with a huge list of wine and champagnes, which is pretty unusual for a Main Dining Room on Disney Cruise Line, but seems to be appropriate for the Kingdom of Corona.  Verdict – Uhhhh…Tie!  I just can’t pick on this one.

8. Appetizers, Soups, Salad, and Bread – Tiana’s appetizers include fritters, charcuterie, shrimp & grits, and tuna tartare. If some of those words are foreign to you, it’s a Southern thing. We tried the sausage fritters and shrimp & grits and enjoyed both!  The soup and salads consist of a seafood pepper pot, tomato soup, iceberg wedge, and a shrimp & orange salad.  The soups were both good, as was the wedge!  Bread is a large loaf of herbed brioche.  Good, but nothing to write home about.  Appetizers at Rapunzel’s include a charcuterie board, ravioli, shrimp, and tuna tartare.  My favorite there was the ravioli, while my daughter enjoyed the charcuterie board.  The soups are potato cream and asparagus and broccoli.  The salads are a “Maximus Salad” which includes a cucumber salad, potato salad, and carrot salad; and a wedge and hot salmon salad.  The salmon is the winner here.  Bread service at Rapunzel’s on the other hand, starts off with soft pretzels!  What a wonderful way to start a meal!  There are also some random dinner rolls in the bread basket, but seriously, who wants those?  The pretzels are clearly the star.  Verdict – Rapunzel’s!  Because pretzels. 9. Entrees – Dinner at Tiana’s includes a seafood pasta, a Cajun sea bass, roasted half-chicken, pork tenderloin, and prime rib. Over at Rapunzel’s, entrees include sea bass, pork loin and pork belly, pasta and sea scallops, roasted chicken, and prime rib. You’ll notice some very similar offerings there which is standard for Disney.  They want to appeal to the masses and they know people like steak, chicken, pork and seafood!  Nothing crazy usually.  But each restaurant puts their own spin on the flavors and details of the dishes, and they both do them well.  Verdict – Rapunzel’s.  I’m only giving a slight edge to Rapunzel’s here.  This one is seriously close. 10. Dessert – Both restaurants have some wonderful choices for desserts! Tiana’s has a chocolate sponge cake, white-chocolate bread pudding, a bananas-foster sundae, and a pecan-nut tart. The real reason to be here, though, is the beignets.  Hot, fresh, and melt-in-your-mouth beignets.  I wasn’t expecting much from a mass-producing kitchen, but wow, I loved them!  Rapunzel’s has a fry-pan sweet bread, crème-brulee cheesecake, apple strudel, birthday-cupcake sundae, and a chocolate-cake tower.  I’ve heard the fry-pan sweet bread being compared to Tiana’s beignets, and it’s a valid comparison.  The sweet bread was very good, but is much denser, and I preferred the beignets.  The cupcake sundae was a sundae with a cupcake on top and there’s absolutely nothing wrong with that.  I know the cheesecake is a huge hit too.  Verdict – Tiana’s!  While I loved the cupcake sundae, I could eat those beignets every night.  I shouldn’t, but I could!

So who is the winner here?  By sheer numbers, it’s Rapunzel’s!  Rapunzel’s is amazing and deserves to win, but I’m going to stand by my opinion that both of these restaurants are among the best anywhere on board Disney Cruise Lines.  I don’t think you’ll be disappointed by either one!

Tammy has been a lover of all things Disney for most of her life. There’s nowhere on this Earth she’d rather be than on a Disney cruise with her family. She’s a Space Force wife and proud mom of two wonderful children and one beautiful daughter-in-law . She fulfilled a lifelong dream in 2008 and became a travel agent specializing in Disney vacations. She now owns her own travel agency - Storybook Destinations. You can reach Tammy at Tammy@StorybookDestinations.com.