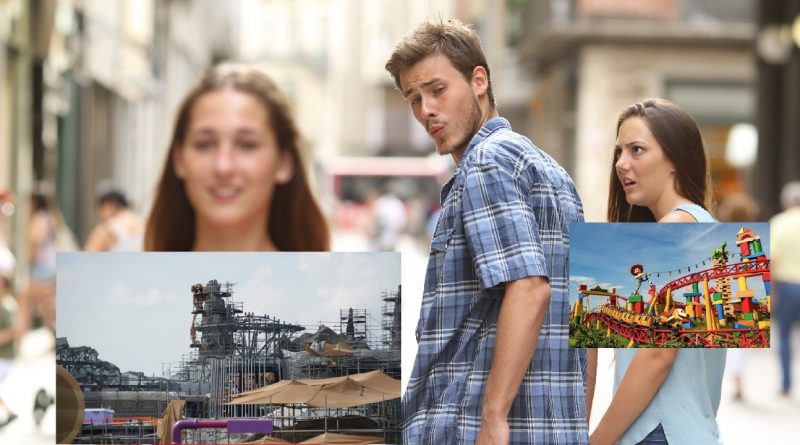 This week’s SATURDAY SIX takes a look at Theme Park Memes for July! For many readers of this fine blog series, much of their theme park information comes first from their social media feeds. Facebook and Twitter are often places where you’ll find “breaking news,” the latest rumors, and first looks at new food items and merchandise at the parks. In-between the important stuff comes the theme park memes.

In general, theme park memes are a pithy and whimsical look at something going on in the theme parks at-this-moment. While some memes have staying power, the vast majority are completely forgotten about within a week (if not a day.) The SATURDAY SIX is here to pay tribute to this “art” of storytelling by taking look back at some of our recent favorites. It is up to you, Dear Reader, if you would like to see this as a monthly feature, so let us know in the comments. Without further ado, let’s kickoff the countdown with…

One of the more recent meme trends to catch on in the theme park world uses the Slaps Roof of Car template that was originally created years ago. Our favorite version uses a salesman selling the concept of adding more IPs to Epcot, something we are all thinking about with the upcoming additions of Guardians of the Galaxy and Ratatouille, along with heavily rumored addition of Pixar brands such as Coco and Inside Out. This week the Orlando Sentinel reported that the Epcot lagoon – which currently hosts IllumiNations: Reflections of Earth – will be getting a $2M upgrade in electrical work. This all but confirms a replacement nighttime spectacular is on its way, and judging by guest reaction to Happily Ever After compared to Rivers of Light, its almost impossible to believe the new show won’t be filled with IPs compared to the wholly original concept of IllumiNations.

A while back we did a SAT SIX on movies filmed inside Disneyland and Walt Disney World, which included studio movies such as Saving Mr. Banks, The Florida Project, and Tomorowland. Another on the list was The Further Adventures of Walt’s Frozen Head, a film funded entirely by theme park fans through Kickstarter. Its titular character also runs a popular Twitter account that often makes sharp observations on the current theme park world. After years of people making comments that Arendelle doesn’t belong in Epcot’s World Showcase (as part of the Norway Pavilion) but being perfectly fine with characters from Aladdin appearing in the Morocco Pavilion, @WaltsFrzenHead gave everyone a geography lesson.

One of my favorite follows on Twitter is @HamJenkinsIII as he created a unique meme concept and then reused it as part of a long running  recurring joke. The meme series is based around an iconic picture of Walt Disney that was taken on the day Disneyland opened in 1955. “Walt” is then placed in various other areas throughout history, dedicating them. The more absurd the place, the funnier the picture actually becomes.

While it may have just been a small blip on the radar in the Real World, the Walt Disney Company announcing it was eliminating single use straws in 2019 caused a near meltdown on social media. Now, conservation and Walt Disney go together like peas and carrots, but many guests just aren’t ready to lose their straws. In the big scheme of things, you would think eliminating balloons and plastic bottles would have a much larger and profound impact on the environment, but I guess you have to start somewhere. Without the news, we also wouldn’t have been able to see this next level bonkers photo of Walt Disney dedicating Disneyland using a single use plastic straw.

Much like political discourse, for a while now theme park Twitter has been divided with a certain percentage believing that any criticism of Disney (and to a lesser extent Universal) is somehow a personal attack on the company. Let’s take a look at Pixar Pier and Toy Story Land. The concept art Disney provided at the start of each project had a lot more elements than what eventually opened to the public. A month after Pixar Pier opened, there was still Paradise Pier signage in the area. This past week alone the Bing Bong store had multiple changes to a temporary sign because the original one was so insane that we can’t even include it in our annual Turkey of the Year Awards. Meanwhile, over in Florida, Toy Story Land, Disney had to block off multiple areas for being unsafe, and guests are already peeling off some of the queue elements.

Everyone reading this enjoys Disney. We all love going to the parks. There are some really awesome parts of both Pixar Pier and Toy Story Land. Pointing out areas that can be improved doesn’t mean you don’t like the land or Disney as a whole.

Speaking of one of the things we love about Toy Story Land… riding Slinky Dog Dash gives many guests their best view of the highly anticipated Star Wars: Galaxy’s Edge. Using possibly the most popular meme of 2017, Twitter user @FinnFromNy used the distracted boyfriend meme to show what theme park bloggers are really thinking of when on experiencing this new attraction.

HONORABLE MENTION – A Picture Is Worth 1,000 Words (in this case maybe even more) So there you have it: the SATURDAY SIX Looks at Theme Park Memes! See you next weekend for the latest installment of the SATURDAY SIX, where we’ll look at something fun from the world of Disney and Universal. If you enjoyed yourself, be sure to check out The Magic, The Memories, and Merch! articles, or, for your listening pleasure, check out the E-Ticket Report podcast. You can also follow Your Humble Author on Twitter (@derekburgan).

Special Thanks to our spirit animal Brandon Glover, professional theme park agitator @Schmoofy, the diligent defender of DCA @Hastin, mailing it in Tim Grassey, the official mascot of Casey’s Corner @SuperWeenieHtJr, the SAT SIX Fun Squad of Parkscope Joe and Nick, and blogger to the stars Megan Stump for their invaluable assistance with this article.