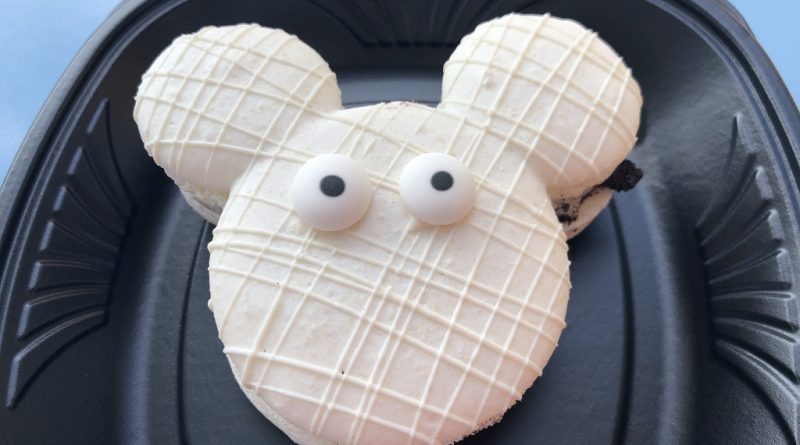 It’s Halloween time at Disneyland Resort. Both Disneyland and Disney California Adventure are decked out in playfully spooky decorations and fall colors, but the real star of the show is the food. This year there are some tasty new treats, as well as returning favorites from 2017. Lets take a look at the best Halloween food at Disneyland Resort. Award Wieners offers many different types of Funnel Cake Fries throughout the year, and I know this dish has its share of fans, but I’ve never been a huge fan of them. The fries themselves are usually room temperature by the time I get my order and sit down to eat them, and overall I think they’re bland in taste. I will say that Pumpkin Spice is the best version of this dish that I’ve had. I’ll start by saying that this is a perfectly pleasant-tasting churro. Like pizza, you really can’t go wrong with any churro. But unfortunately this churro only has a light dusting of the pumpkin spice flavor that I not only want, but NEED. I want the pumpkin flavor to punch me in the face. Also, I’m not a hug cream cheese fan, so the included cup of it didn’t do much for me. This shouldn’t be as good as it is. It’s got crappy/mass produced theme park mac & cheese, the cone is bland in taste, and it’s $9 for small amount of food. But it’s visuals take it a long way. It’s perfect for the season. The neon orange mac & cheese, the vibrantly red crushed Flamin’ Hot Cheetos, and the black-as-my-soul bread cone makes me feel like I’m eating Halloween. The outside is nice and flaky as you would expect, while the middle layer is made up of cookies & cream frosting. This item is extremely sweet. My favorite part about this macaron are those piercing and emotionless eyeballs. It kills me to rank the Graveyard Cupcake this low, but there’s nothing in terms of taste that makes this ahead of the rest of the delicious food on this list. Looks-wise, the cupcake is a 11 out of 10. It’s simply glorious. For those curious, the cupcake is filled with cherry filling, dark chocolate mousse, and also has Halloween sprinkles, and a chocolate tombstone. Look at that scared cat on the tombstone! Beautiful stuff. This one really sneaked up on me. My first couple of bites were of just the “pie” shell, which didn’t contain much flavor. I was ready to give up but then I hit the glorious sweet potato filling. Aesthetically, I appreciate that the Hand Pie looks more “Fall” than “Halloween.” I may be crazy, but the visual of the roasted marshmallows give me a calm campfire feeling. As I mentioned last year, the best part of this sundae is the two scoops of white chocolate raspberry swirl ice cream. The ice cream is an exclusive flavor for Disneyland that is made by a local manufacturer, not the typical Dreyer’s ice cream usually sold at the resort’s other ice cream shops. The taste of the ice cream alone is fantastic, but then you have all of the other parts of the sundae–the chocolate and sprinkle-dipped cone bowl, chocolate bat wing cookie, sprinkles, whipped cream, and berry sauce. It’s photogenic and tastes as good as it looks. The taste of the the Candy Cone Pie is fantastic. It’s filled with vanilla, butterscotch, and white chocolate pudding. I just can’t rank it higher due to it’s small size and high price. $6 for a couple of bites of food isn’t a good value, but wow is it good. Jolly Holiday is absolutely killing it with the Halloween desserts this year! The cake is moist and delicious, while the inside is filled with creamy marshmallow. Typing this description is difficult because it’s making me want to go out and get one right now. After I tried the Halloween Dog I was surprised that Disney had made a legitimately good hot dog. The spicy meatballs, cheese sauce, and oven-roasted tomatoes all blended perfectly. And in terms of Disney food prices, it’s a good value at only $9 (it also includes a bag of chips or apple slices). But then I was shocked to find that the Oktoberfest Dog was even better. The Oktoberfest Dog contains kielbasa sausage, and is topped with caramelized onions, sauerkraut, Oktoberfest beer cheese, and green onions. I thought the roll it was served on was perfectly toasted. Overall these two dogs were fantastic. Plaza Inn’s Yule Logs are a classic Disneyland dessert, and I’m happy to report that they’re still wonderful, even though the serving size was downgraded this year. The filling is chocolate hazelnut that is creamy, but not to thick or thin, and the cake is spongy and delicious. Thankfully the Yule Log is also a Christmastime staple at Disneyland, so you can enjoy this treat for many months. The name “Churro Sundae” makes this item sound so inconspicuous that I almost skipped it thinking it would be another simple and unexciting ice cream sundae. But wow, am I glad I tried it. The sundae includes cookie butter gelato, a cinnamon churro, and is topped with cajeta and whipped cream. The cookie butter gelato is heavenly, and getting a spoonful of it with the cajeta (caramel sauce), and a bite of churro almost sent me off this planet. Incredible. A must try.

I think its fair to say that this is one of the best lineups of seasonal food that Disneyland Resort has ever had. There’s so many mouthwatering items to try that it will take multiple visits to eat everything. I want to know what you think about the Halloween desserts that you’ve tried at Disneyland this year. Do you agree or disagree with anything on this list? Let me know in the comments below.