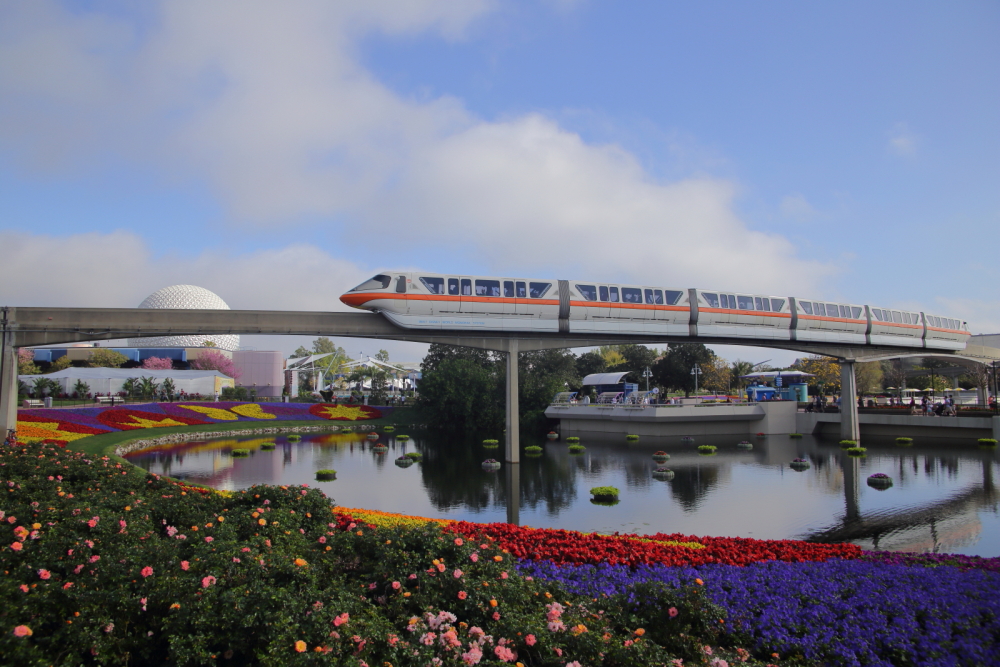 Hello, friends! It’s that time of year again. 🙂 I’m thrilled to be able to share with you some of the Flower & Garden Festival over at Epcot. Now, I wish I could have visited during better weather. Unfortunately, you’ll notice my photos are pretty grey. I’m just glad it didn’t rain! To get things kicked off, Here’s Figment still hanging out behind Spaceship Earth. He’s a leftover from the International Festival of the Arts, but I’ll never complain about having more Figment in the parks. You don’t want to miss the rest of the festival, do you? Click to see more!

Heading toward the International Gateway, Chip and Dale are doing some gardening. This is actually an awesome photo spot. See the brown section of mulch? That is for folks to step into the photo. However, if you are like me and want a photo of the topiary without anyone in it, then be sure to get there early. Even at 10am there was a line for photos here. On the reverse side Donald is leading his nephews on a march. Oddly, when I was by later in the day a bench had been put in front of this topiary for photos. You might be seeing that getting there early for photos is a trend in my recommendations. Honestly, if photos are a priority I can’t stress enough how much better it is early in the day. Over in Canada Bambi, Thumper, and Flower are camped out in the garden. Canada has beautiful gardens year round, but these are really icing on the cake! They’re so bright and pretty. In England Pooh and his friends are back again. While everyone’s favorite bear is shown below you can also see Rabbit, Tigger, Eeyore, and Piglet just around the corner. There are also different teas growing in the garden and tours hosted Monday through Thursday at 4:00 PM and 6:00 PM and Saturday and Sunday at 2:00 PM, 4:00 PM and 6:30 PM. I highly recommend these tours, it’s a lot of fun! England has so much to offer this time of year! You can also find Tinkerbell in this area. In the past she’s been over by the butterfly garden and Tick Tock the crocodile was found in England. As of my visit over the weekend Tick Tock hasn’t arrived yet. I wonder if he’ll be taking a year off? High on a rooftop, Peter Pan can still be found looking down at Tink. It’s amazing to see how the festival has grown over the years. They’ve gotten more creative every year. Now I can’t imagine having Peter on the ground again. Of course, even though he’s far away I do still wish he and Tink would get the next upgrade to have faces! Speaking of faces, while it’s a little far away in the photo below Belle finally has a face this year! She looks amazing! It’s great to see this upgrade come as the live action movie is about to hit theaters. Are you excited about the new film? Let me know in the comments below! Cogsworth and Lumiere have been moved to the front of the France pavilion. As you can see from the clock, I made it all the way back to France by just 9:10am! The only thing open at this hour was Les Halles Boulangerie Patisserie, the amazing bakery. Since I’d gotten quite a bit done I decided to stop in for a little reward. 😉 After breakfast, I realized the sun was peeking out from behind the clouds and break time was over! I ran back to the front of the park for the below monorail shot. These flower beds are just stunning this time of year. Unfortunately, the sun was already hiding behind clouds again and I decided to find a spot indoors to see if it would pass. Heading towards my next destination I grabbed a quick photo of Sorcerer Mickey. It’s funny, now every time I take a photo with a monorail beam in it, I kick myself for not waiting for a monorail to swing by. I should work on my PhotoShop skills! 😉 While looking for an indoor destination, I finally decided to suck it up and wait to meet Joy & Sadness. I’ve wanted to meet them for a while, but the line is always so long! I was surprised that we worked our way through the line in just 30 minutes. I loved Inside Out and I would totally recommend meeting these two. They were so much fun! I finally decided that the weather wasn’t going to get any better, so I embarked on photographing the other side of the World Showcase for you lovely folks! First stop, Phineas and Ferb. I never got into this show. Any fans out there? Tell me if I should start watching in the comments! 🙂 In Norway, Elsa and Anna have been moved off the main walkway and seated a little further back in the pavilion. It’s a great change because the walkway is now packed with people wanting ride the Frozen Ever After ride! Wow these gals are popular, but I’m a sucker too. I can’t get enough of them. In the more prominent spot in Norway the troll is back! I know it isn’t a Disney character, but this is a classic to me. I love seeing him back up front. Of course, I had to break into the Frozen line to get a photo of him. Good thing I brought a wide lens! In China several pandas are back up front. It’s worlds better then the odd ram that was in this spot last year.  Does this make anyone else think of the upated Disney cartoon, Panda-monium? Back further in the land a dragon is hiding in the water. I always wondered why they didn’t take the opportunity to make this Mushu. China is one of the only lands I can think of that doesn’t have a Disney character in the festival. It seems like this would have been one to add. Along the walkway to Germany, Timon and Pumbaa are on the path to greet guests. I love the Timon! I think he must be the smallest topiary in the festival. He’s cute as a button! Across the pathway, Rafiki is holding Simba up above the crowd. It’s amazing that they can keep all these lush displays looking great for almost three whole months! This is absolutely the most beautiful time of the year to visit Epcot. Snow White has also returned this year looking better than ever. It’s hard to believe they can make something so stunning out of plants. Right next to Snow White, her seven dwarfs are trailing along behind her. I love that they nailed the expression on each one of them. Of course, it looks like one lantern is missing. Can you spot it? Lady and the Tramp mark the entrance to Italy. There are beautiful pots of plants all throughout the land. Red and pink flowers can be seen all over the walkways. This might be my favorite display in the festival and I swear this year is the best it’s looked. In America, Woody greets guests in front of The American Adventure. So far he was the only topiary I’ve seen in the area. I keep hoping every year that they will bring Lotso back! And that’s it for this time. Can you believe that this isn’t even all of the Epcot Flower & Garden Festival? Which topiary was your favorite? Thanks for reading! Please let me know in the comments below what you’d like to see next time around. Until then – I hope you’re having the best week ever.