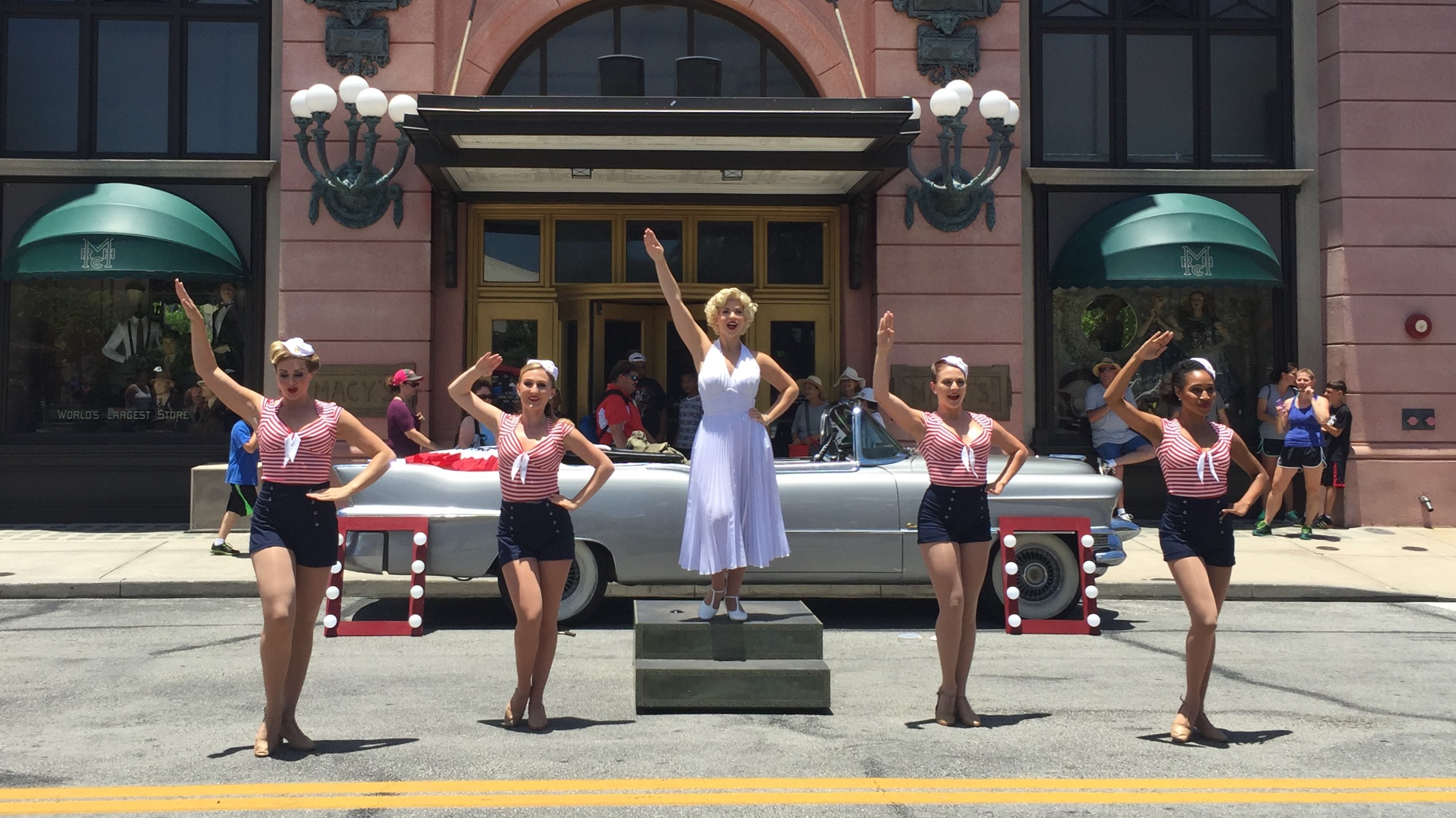 Many fans of Universal Orlando have been focusing on rides lately, with good reason. Skull Island: Reign of Kong has done Team Member previews and it appears soft openings could happen any day now. The Incredible Hulk roller coaster has been testing for a few weeks and should reopen very soon. And two more rides are under construction: Race Through New York with Jimmy Fallon and Fast and Furious Supercharged. However, Universal Orlando has debuted new entertainment at both its parks, especially at Universal Studios, throughout the past year.

These shows take place out along the streets and aren’t meant to be main attractions. However they add atmosphere and entertainment in easily accessible ways. I enjoy these additions because they don’t require much advance planning, you can easily walk up at show time and have a great vantage point. I ventured out to Universal Studios Florida to enjoy as many live performances as possible. Turns out you can pack a whole lot of fun into just a few hours when your focus is on live entertainment. For someone like me who is apprehensive toward thrill rides, this is a refreshing reminder that there is still lots to enjoy at Universal Orlando even if you’re not that into rides.

As seems to be typical for my weekend theme park visits, I arrived later than I hoped. I decided to take my doggy (#DodgertheDog) to try out Universal Orlando’s Kennel Services. Getting to the parking for the kennel is very easy. It is in the lower back corner of the parking structure, part of the Jaws section. Checking in took about ten minutes, as is standard for any kennel service I needed to provide proof that Dodger’s vaccinations were up to date. The form is themed to Hollywood, the pets are called actors and the pet owners are agents. The cost is $15.00 for the day (no discounts available) and the great thing is the kennel is open two hours after park closing, giving agents plenty of time to enjoy the parks. The concern I have with the kennel is that all large dogs are placed in a kennel outside, whereas smaller dogs as well as cats are kept in indoor kennels. Granted the outdoor kennels are completely shaded, but they reside underneath the parking structure, and that just felt weird to me. The temperature was cool enough and at first it didn’t bother me too much, but as I went about my day I thought about my dog sitting in a kennel underneath the parking structure and I wrapped up my visit sooner than originally planned in order to get back to him.

After dropping Dodger off I had to make my way through the entire parking structure since the kennel is in the far back corner. Once I made it through security and into CityWalk I took a moment to notice some new merchandise at the carts. These carts rotate their merchandise fairly regularly and often offer merchandise from franchises not seen in the parks, like Big Bang Theory and Doctor Who. On this particular visit I noticed a cart dedicated to Teenage Mutant Ninja Turtles. Directly across from NBC Sports Grill & Brew the NBC Sports themed cart is now well stocked with Summer Olympics merchandise. I’d be curious to see how well this merchandise sells as compared to the merchandise that is themed on the restaurant itself. I arrived at about 12:00 PM and all the turnstiles were open. If you ever arrive at Universal Orlando when they have the center gates open and are therefore scanning guest’s tickets at tablets in the middle of the turnstiles, go for the tablets. Most guests are so used to passing through the turnstiles that they ignore these available stations, thus making it faster to use these stations. As if right on cue, I heard a live jazz group playing upbeat music, it permeated through the streets adding to the excitement of arriving at Universal Studios Florida. I love the high energy this group brings. They only perform in the morning, in fact I think when I caught them around 12:00 PM it might have been their last set for the day. I stuck around to hear them play the Woody Woodpecker theme song and “Diamonds are a Girl’s Best Friend” (a bit of foreshadowing since I would be seeing the new Marilyn Monroe mini-show later in the day). The challenge with the street shows is the schedule for these shows is not published in the park map or the Universal Orlando app. I decided to visit one of the merchandise shops and asked a very nice Team Member if she had any information on the new Marilyn Monroe show. She was kind enough to call and find out that the next show was at 1:15 PM. I took this opportunity to look in the Universal Orlando app to plan out any other shows I wanted to see that have published show times in the app. I was able to see that Celestina Warbeck and the Banshees had a 2:00 PM show, Blue Brothers at 2:40 PM, and the Horror Make-Up Show at 3:45 PM. When clicking on these shows in the app, I was able to set a Show Time Alert and select how far in advance I wanted to receive an alert. I really enjoy this feature.

While I had some time before the Marilyn Monroe show I decided to trade in my paper annual pass for a new plastic annual pass. I’ve never had a strong need for a plastic pass, in fact I have some concerns about their impact on the environment. I also wonder if since it costs Universal more money to print plastic passes if they’ve rolled up some of that cost into the increase in annual pass pricing. Regardless of these concerns, it took me less than five minutes to swap my paper pass for a plastic one, and all the Team Members were very friendly. It came closer to show time so I headed over to the New York area and was surprised to see that another show was already underway. “Sing It!” is an acapella sing off show. It is very much in the spirit of the movie “Pitch Perfect.” I enjoyed the energy of this show, the performers definitely give their all. However, some of the singing was very high pitched and a little squeaky at times. Still, it was enjoyable and fun. Soon it was 1:15 PM and there was no need to go anywhere because the Marilyn Monroe mini-show takes place in the same spot, in front of the Macy’s facade. A few minutes before the show began a “director” of the show came out to get us, the extras, ready for Marilyn’s arrival. He selected a reluctant man in the audience to have a seat in the director’s chair to be the object of Marilyn’s desire. She arrived in style, riding high in a classic convertible with her squad of backup dancers. The show consists of two songs, very fun and a bit seductive. Following the performance Marilyn is available for pictures. Some have described this mini show as an enhanced meet and greet. Immediately following her show, my friend and I headed down the road to the other end of the New York area. We were pleasantly surprised to see that the “Beat Builders” show had just started, it was about 1:25 PM. This show takes place at the edge of the New York area. Percussionists dressed as construction works bang out some beats on various pieces of equipment and get the audience involved. It is a high energy performance and is all the more impressive considering the heat and humidity. The hits just kept on coming as we made our way into the San Francisco area. It was 1:30 PM and time for yet another street show: the Flying Fish Market. This show is full of gymnastics and juggling. I felt it lacked the same level of energy I enjoyed with the three shows I had just watched. I would not make a special trip or effort to see this show again, but if I happened to be in the area and the show was on I may stop to catch it. Things were going so well so far. I’ve been in the park for an hour and a half and have seen a live jazz band and four street shows. It’s been a pretty packed afternoon. The reminder I set in the Universal Orlando app popped up on my phone. It was time to head into Diagon Alley. I really enjoy Celestina Warbeck and the Banshees. The quality of the music and the performers are top notch. On this visit a retired U.S. Marine was selected to be serenaded by Celestina and her Banshees. It brought my heart so much joy to see how happy he was in that moment. His family wiped tears from their eyes. After a brief stroll around Diagon Alley, we took the scenic route back over to the New York area to catch the Blue Brothers. This show is classic, a fan favorite. Sure enough at the 2:40 PM show there was plenty of dancing in the streets and tail feathers shaking. It was easy to work up a thirst. Having worked up a thirst by dancing along with the Blue Brothers, and bumping into another friend, we headed into Finnegan’s. I adore this bar and restaurant. The food and atmosphere are so good that I have visited Universal Studios just to dine here. One of the great features of this place is the live music in the late afternoon. As we walked in we were delighted to see one of our favorite regular performers. It has been three hours of non stop entertainment in the park, and we had one more show to go. The Horror Make-Up Show is one of only two opening day attractions still in operation. It is hard to believe I have never seen this show before this visit (I know right? I can hear your gasps from here). Truth be told the subject matter did not appeal to me. I’m not a big horror genre fan, at all. However, this show is way too funny to be missed. My friends and I enjoyed so many laugh out loud moments. It was a great show with which to end my live entertainment marathon. As I headed out and made the journey through the parking structure to get back to the kennel area I grew a little frustrated with the kennel’s distant location. I really do enjoy Universal Orlando, but the kennel’s location and the fact that large dogs are kept outside, make their kennel service the weakest of all the major theme parks. However, my displeasure with the kennel was not enough to damper my mood. In one afternoon I experienced non-stop live entertainment. It was a reminder that Universal Orlando’s entertainment is some of the best ever!