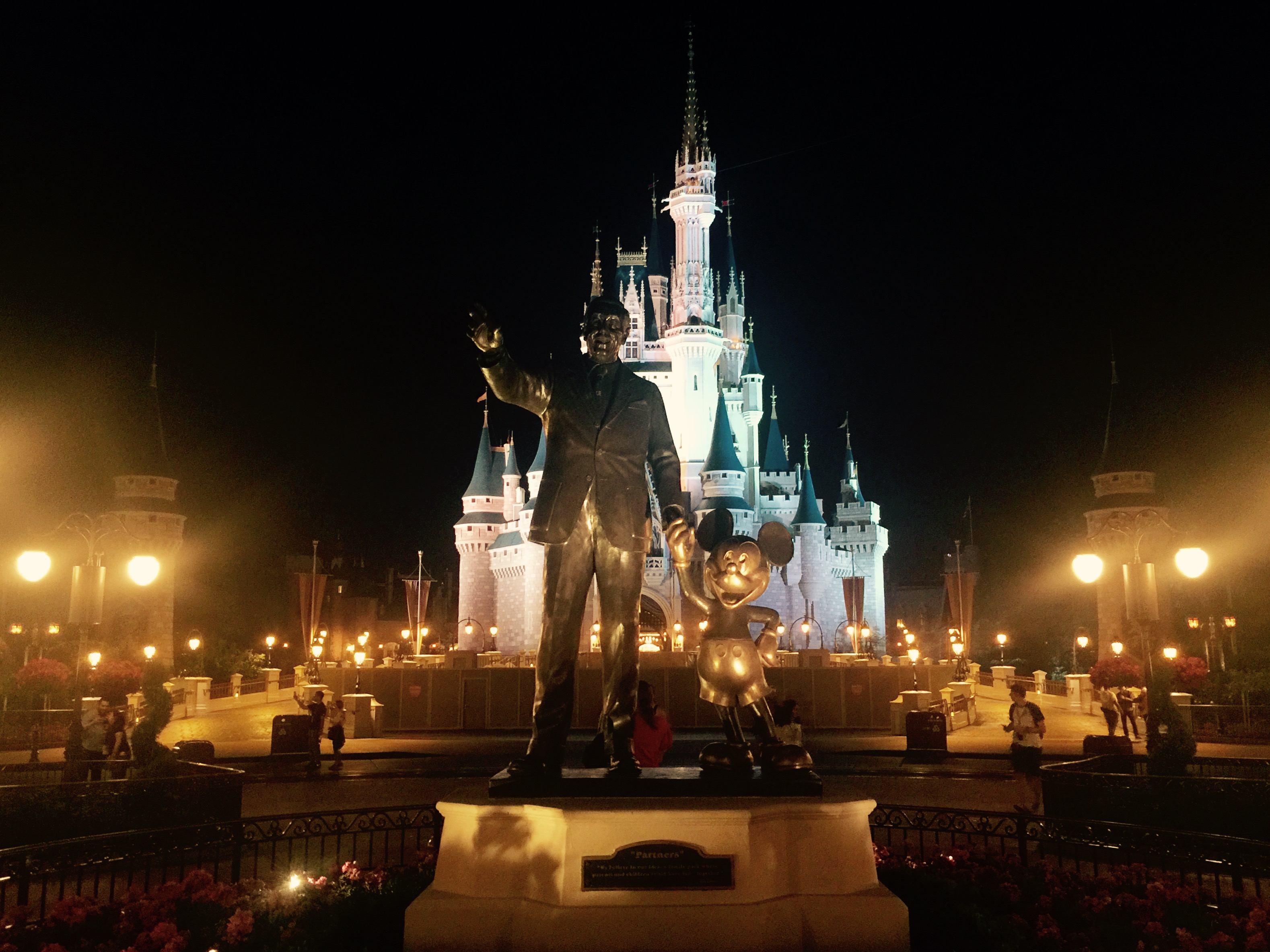 Update – April 27, 2016 – Disney has announced that Annual Passholders and Disney Vacation Club members may now purchase Disney After Hours tickets for $75, half price.

Last month when Disney announced its late night event at Magic Kingdom, Disney After Hours, I was pretty happy. It coincided with a trip I’d already planned (thanks for nothing, Rivers of Light), so I figured – what the heck? If you haven’t heard about Disney After Hours, and given ticket sales, that may be a near certainty – more on that later, here’s the lowdown: Disney After Hours is a hard ticketed ($150 per person) event at Magic Kingdom in April and May. As of today, April 22, two of the parties have already happened with five yet to come. After Hours is three hours in Magic Kingdom for guests after park close with much shorter lines, most attractions open, and complimentary bottle drinks and ice cream novelties. Sound like Extra Magic Hours, but ticketed? Yeah, kinda.

Ticket purchased, I looked forward to a fun night at the park. Until reports of the first night started coming in with tales of tickets being given away, cast members outnumbering guests, and empty Main Street vehicles, that is. I was already doing this alone (solo trip) – was I going to be walking through a deserted park with desperate cast members forcing Mickey bars on me until I couldn’t eat any more? I tried bribing someone to come down to Florida just for the night to keep me company (thanks for nothing, Len). I watched social media to see if anyone I knew was going (or would admit to buying a ticket). No dice. News started coming in that Disney was giving away more tickets for that night too. I imagined myself in the narrative of Kingdom Keepers. Well, I’d be alone, but maybe I’ll save the park from Maleficent. But I’m a pro and wanted to see how the night unfolded.

Guests with event tickets were admitted to Magic Kingdom that day starting at 4:00 PM. I know because I had met a friend in the park earlier that day and was leaving the park around that time. This is the same procedure Disney follows for the hard-ticket parties likes Mickey’s Not So Scary Halloween Party and Very Merry Christmas party. Me, I was headed back to my hotel room (Pop Century) for a nap. If there’s one thing I know, it’s that an event that begins after my usual bedtime is going to go much smoother for me with some sleep. I knew I wanted to see the transition from regular park day to ticketed event, so I was back at Magic Kingdom at 9:00 PM, just as the Main Street Electrical Parade was starting from Town Square.

I filled the time with seeing Wishes and Celebrate the Magic, and trying to find something to eat after 9:00 at Magic Kingdom. Then it was time to watch. I really wanted to see what would happen with day guests in the standby lines as event time approached. Seven Dwarfs Mine Train was where I decided to see how the process went. For the last hour the park was open to all guests, the posted standby time at Mine Train was 40 minutes. Now, it wasn’t really 40 minutes, but this is standard procedure at Walt Disney World to help close the park – discourage guests from getting in line right before close. Guests were allowed to enter the queue right until 11:00 (park close). Around 10:50, people with event lanyards started showing up from seemingly nowhere at the entrance of the attraction. It was like cockroaches when the lights go out. In this case, there were maybe 20 cockroaches in groups of 2 to 5. Boy, did I feel like the biggest loser in the Place Where Dreams Come True. The event-goers were held in the FastPass+ return queue until 11:00 when they were let in, and presumably went straight through to the attraction. Given the capacity of one train, it’s doubtful anyone waited more than 2 cycles to board (one cycle for the people from standby and one for the event people). With that out of the way, it was time to start having some fun.

My first stop was Haunted Mansion. After that I planned to move counter clockwise through the park with the idea that this would leave time for the standby lines to clear at Space Mountain and Mine Train. My plan worked perfectly. Every attraction was a walk-on and at attractions where the load and unload are in the same place, cast members offered anyone who wanted to stay on the opportunity.

Here’s something you never see at Space Mountain:

Here are the 15 attractions I did in the three hours of the event:

And my final attraction of the evening, Mad Tea Party, which I had all to myself.

The attractions I didn’t do were ones where the potential of being alone on them were too creepy to contemplate (Jungle Cruise) or that I simply have no interest in (Stitch’s Great Escape, Tomorrowland Speedway).

So was it worth it? Absolutely. Did I feel foolish having purchased a ticket when so many were given away for free? Definitely. But someone had to do it, right? Here are the times when I think buying a ticket to Disney After Hours makes sense:

When you’re on a very limited time schedule and the event will replace a day’s admission on your park tickets. $150 is no small sum, and that’s per person. But if you enter the park as early as possible (4:00), you’re setting yourself to do everything you’d want to do and then some with one visit to Magic Kingdom.

When your arrival day starts at a late hour or you’re coming from the West Coast. If your flight doesn’t get into Orlando until 5:00, this is a good way to get in some park time (though you’ll be sleeping late the next day). Or if your head is still 3 hours earlier because you’re on Pacific time, you’re going to be wide awake anyway – why not stay up late.

If you’re given a ticket for free. For the first event on the 14th, we were told that DVC members staying on property were told the day before the event that they could have complimentary tickets as “part of the DVC 25 year celebration.” For the event on the 21st, we heard tickets were given out at the bus stops at Deluxe and Moderate resorts and to Cast Members.

Tips for attending Disney After Hours

It is impossible to do every attraction open in three hours (if that’s what you want to do). Knock out the shows (Tiki Room, Country Bear Jamboree, Mickey’s Philharmagic before the event actually starts. After that, starting in Liberty Square and going counter clockwise worked really well for me.

Do not come hungry if you’re arriving after 9:00. I ended up at Cosmic Ray’s because none of my favorites were open and the lines for food are surprisingly long at 9. Don’t be me eating a veggie burger at 9:30 because you’re famished and have already looped the park looking for something to eat.

Bring a camera. You’re never going to get a better, unobstructed view of anything in Magic Kingdom. If you’re really serious, bring a tripod for that perfect shot of the Castle or the Main Street Electrical parade, which had an unexpected performance that night. It’s not announced as part of the event, but was already to Frontierland when I exited Haunted Mansion around 10:30.

Enjoy the beverages and ice cream. There were plenty of carts offering the free food throughout the park. If dairy’s not your thing, fruit bars are available.

Princess Fairytale Hall and Town Square Mickey are both open during the event. Dress up for your close up and get lots of character photos. Speaking of photos, there were plenty of PhotoPass photographers on Main Street and in front of the castle. People even got photos of themselves lying in the middle of Main Street.

Stay until the end. You’re potentially paying $50/hour for this. Make the most of it.

Enjoy the ambiance. I can’t adequately describe how quiet the park was during the event. It was refreshing. I heard parts of Splash Mountain that I’d never heard before because there was no noise to block it out. You have no idea how much you can hear when there’s no one around talking.

So, all in all, I’d do this again. Even if I had to pay for another ticket. I sincerely hope Disney turns this into a successful event so they will continue it.

Here’s my final photo of the evening:

Laurel is a former software engineer and current student. She likes pina coladas, getting caught in the rain, and Big Thunder Mountain.

36 thoughts on “Disney After Hours – Is It Worth the Money?”