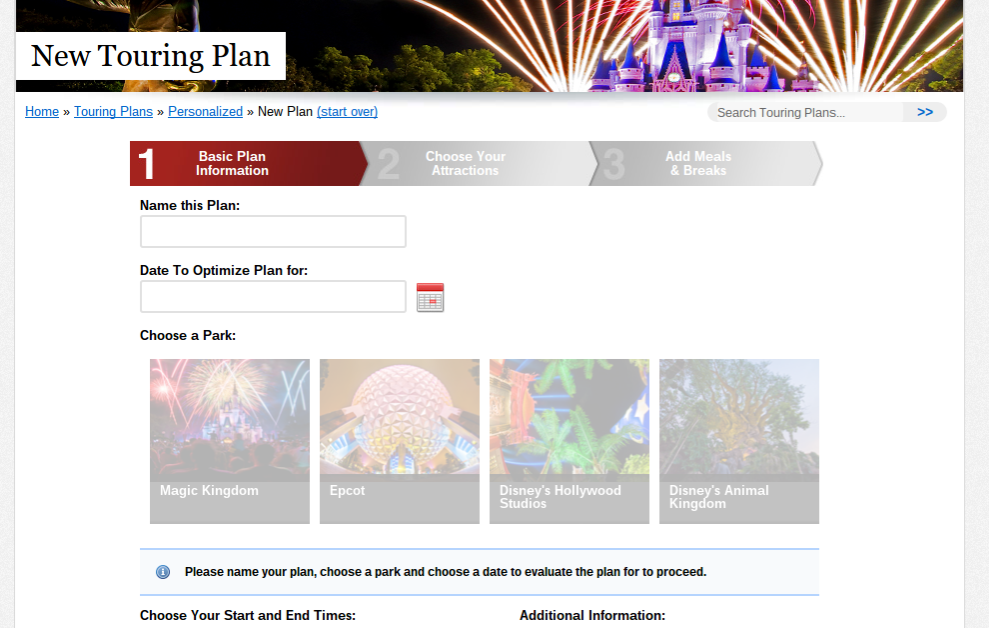 This is a continuation of our Back to Basics Series. Scroll to the bottom to see our other Basics posts.

In this Disney Parks Basics article, I am highlighting one of TouringPlans.com’s greatest achievements.

It has revolutionized how people see attractions and shows in the parks.

It is based on hours, days, months, and years of exhaustive research by dedicated park fans.

It is what got this little website off the ground in the first place.

Touring plans have been a staple of The Unofficial Guide books since the very first edition, and that has carried over to the TouringPlans.com website and Lines app. This is not just suggested material that will probably get you through a few more attractions in a day. The people in charge say that park guests can save four hours of wait time using touring plans.

Over the past five years, touring plans have increased in variety and become even more accessible, but this article will highlight some ways to get started with touring plans on your next Disney Parks vacation!

I did my first touring plan back in 2010 when I was reintroduced to Walt Disney World as an adult. My friend Michelle had been doing them with her family, and wanted to do it with me, too. The two of us also listened to the WDW Today podcast, which featured Len Testa doing a few episodes about touring plans.

We each bought The Unofficial Guide to Walt Disney World 2010 as soon as it came out and gobbled up the giant book like it was a Harry Potter novel. In the back of the book (and this applies to the current editions as well) are some of the most tried and true touring plans that people have used. We used it and really did achieve so much more than if we’d just gone to the Magic Kingdom with no plan of action.

When I’ve used it in the past, I’ve always made sure to arrive at park opening, to maximize the amount of attractions conquered. Although I never have personally used a touring plan with children, I know that many people have and swear by them.

I have not only used the paper versions from the books, but have also utilized the TouringPlans.com website to customize my own, and have also used the Lines app on my phone to have my touring plan with me and be able to change it in the park at a moment’s notice.

However, I love to take a relaxing pace every once in a while. Touring plans allow for free time to be planned, but also can adjust if you’re not a Type A person and just want to do something that’s not planned at all!

It’s as easy as following the steps. The Touring Plans staff have figured out which attractions in which order will give guests the most for their money. Hitting Test Track in Epcot first thing would probably be of greater benefit, for example, than doing Journey Into the Imagination with Figment. And saving Spaceship Earth for later in the afternoon, while seemingly the most illogical thing to do considering its placement in the park, is actually a great idea. The touring plans have been made to allow for these things. Touring plans can be found in the back of The Unofficial Guide books. After scouring the book for the most unbiased opinions on hotels, attractions, and food, you can find the most popular touring plans here. These are great to cut out and keep in your back pocket during a day of touring in the parks.

A larger listing of touring plans can be found on this website. Pick a park, and then select the type of touring plan you’re looking for. There are plans for families, adults, late-arrivals, and many more.  There’s even an Ultimate Magic Kingdom Touring Plan, which tries to hit all the attractions of the Magic Kingdom in one day.

These plans can be printed out, and also can be located on the Lines app.

I know that I am not a fan of every single attraction in any theme park. So I have become a religious user of the personalized touring plans. These can be used with a free TouringPlans.com subscription. (Choose the Basic access for the free subscription.)

I will show you how to personalize a plan based on the selections my father made for our upcoming Walt Disney World trip in June.

First, I selected a name and date for our trip, as well as which park we would be attending. (We are not using Park Hopper on this trip.) I scheduled a few places for meals, but no breaks..at least not yet. (The plans are easily edited if plans change later on.) The wonderful thing about personalized touring plans is that you can plug in your FastPass+ information as well. TouringPlans.com will even tell you which FastPass+ reservations should be your highest priority, if you so choose. The initial list is not the final listing; it is just a list of the attractions you chose in the order in which you chose them. It also gives you a list of showtimes for all the shows that were chosen. The last step that needs to be done is optimization. Be sure to click on that “Optimize” button – it may take a little bit, but the end result is glorious.

Finally, your personalized touring plan is done. If you’re not satisfied, you can move stuff around by dragging the icon on the left of each attraction and show. If you move an item (and want it to stay there), click “Evaluate” at the bottom and the program will update your expected wait times without moving things around. These touring plans can be printed once completed and taken to the parks with you. Or…

…you can find them easily on your phone!

There are several Lines apps, so be sure to select the one that works with the resort you’re visiting: Walt Disney World, Disneyland, and Universal Orlando.

If you log into the app with the same login information as your online subscription, then the personalized touring plans you made on your computer will appear on your phone! (This does require a premium subscription. Full disclosure: I have a premium subscription through my work here as a blogger, which allows access to the Lines app, crowd calendar, and the full plethora of touring plans. However, there are many great discounts available, including one if you have the most up-to-date version of The Unofficial Guide book. Check it out – a couple bucks for one year of complete access.) The nice thing about having the app is the ability to enter wait times yourself when you’re in the parks. This will help the app give the closest estimates to wait times as possible. The more people entering wait times, the better the app is for everyone!

I like marking each completed attraction as Done! on the app. It gives me a sense of accomplishment, as if I was taking a pencil and crossing out another thing on the list. Do I have to use a touring plan?

This answer is most definitely, “No.” You don’t have to use a touring plan! If you know the parks backwards and forwards, then you might feel like you can get around better on your own time than on an app’s time. Or maybe you’re a person who likes spontaneity, and you like to travel wherever you want, whenever the time feels right. Or maybe you need to work with little children, and they dictate where you go and when you stop.

I would encourage you to try a touring plan one time. Just once! I am planning on doing that with my parents, which is why I made the touring plan above. I want them to experience a touring plan, and hopefully have a positive experience where they get as much done as they wanted.

If a touring plan works the first time, there is a good chance it will work the second and third times, too. Before you know it, you’re personalizing touring plans all over the place and telling your friends all about it! (Like me!)

Do you have a touring plans story? Have you ever converted someone to doing touring plans? Raise your hand if you’ve forgotten to hit “optimize” on your personalized touring plan! *Slowly raises hand*

Additional Back to Basics Posts

I've been enjoying Walt Disney World since my Nana pushed my sister's and my strollers back in the late 1980s. I enjoy my day job here in the Denver area as a teacher and music coordinator at our church. I love music, reading, Doctor Who, Star Wars, and Michigan sports!

23 thoughts on “Disney Parks Basics: All About Touring Plans”