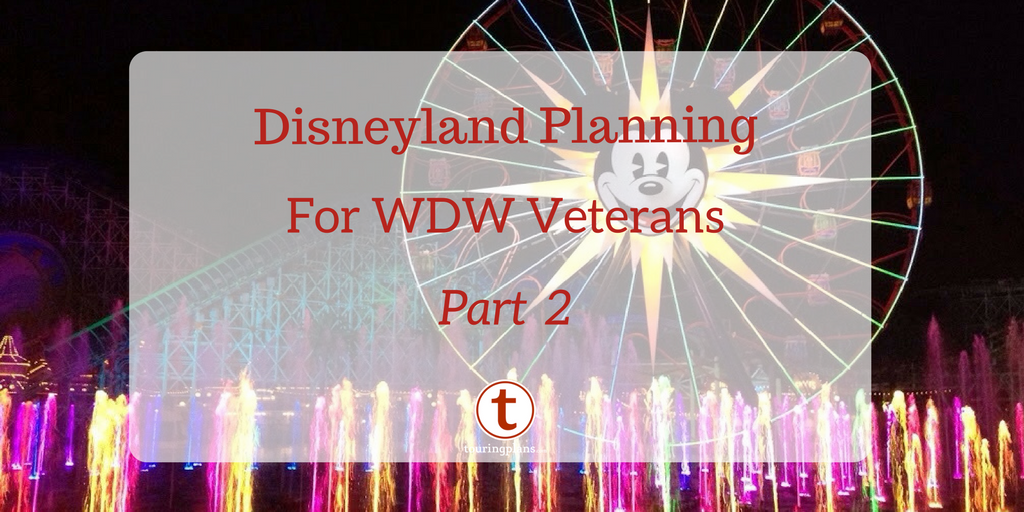 Hopefully you’ve had a chance to read the first part of this article, covering some of the nuts-and-bolts aspects of Disneyland planning. If not, go back and do it now.  I’ll wait.

Done?  OK, great. Now that you’ve got all of that fresh in your mind, let’s talk a little bit about what the Disneyland experience is like. It’s obviously similar in a lot of respects to Walt Disney World, but there are enough differences that knowing where you should direct your focus will really enhance your trip. So, without further ado, let’s get to it! Broadly speaking, Disneyland experiences the same sort of seasonal ebbs and flows that you’re used to at Walt Disney World. Spring Break, Summer, and Winter Break tend to be pretty busy, and you can expect lighter crowds when kids are in school. There are some quirky variations attributable to local events, so certainly make sure you check the Disneyland Crowd Calendar, but if you’re familiar with Walt Disney World crowds, the times to target are going to be what you’d expect.

With that said, if I were advising a Walt Disney World veteran as to the best time to visit Disneyland, I’d definitely suggest the latter part of the year if possible. Disneyland has more local visitors that it needs to entice to visit the parks, and is accordingly a lot more cavalier about making seasonal changes to the attractions. For example, Haunted Mansion gets a Nightmare Before Christmas overlay from mid-September to the end of the Christmas season that really transforms the attraction — it’s still vaguely recognizable as Haunted Mansion, but a radically different version. I recall the first time I experienced it, I was expecting a light skinning, where maybe Jack Skellington shows up in a few scenes, but it’s a complete overhaul and is absolutely fantastic. Other attractions also get seasonal overlays. Space Mountain gets rethemed with its Ghost Galaxy version mid-September through Halloween, and it’s a small world gets a holiday makeover from mid-November through the end of the holiday season. One great thing about visiting Disneyland as a Walt Disney World veteran is getting the opportunity to experience familiar attractions in a slightly different way, but the holidays provide the rare opportunity to see those beloved attractions with much more substantial changes.

On a more micro level, you should be aware that regardless of the time of year you visit, as a local park that sees a lot of day guests, Disneyland is far more susceptible to weekend crowd swings than Disney World where people tend to visit for longer periods of time. Also, during slower times of year, Disney will significantly restrict its parades and nighttime shows. By way of example, in a recent week in October, the only “spectacular” that ran at all was World of Color at Disney’s California Adventure — no parades at either park, no evening fireworks, no Fantasmic! during the week. The weekends usually have a full slate of shows, but the weekdays are dependent upon expected crowds. Park hours also tend to be longer on the weekends, and might be quite short during the week during slower times.

The point is, make sure you check the park hours and show schedule the times you intend to go if those things are important to you. Regrettably, it can sometimes be a choice between crowd size and show schedules — when Disneyland is expecting light crowds, they don’t run their fireworks and parades, so it’s either brave the crowds and get the shows, or skip the shows to enjoy lighter crowds.  The best approach, if it’s an option, is to have your trip straddle a weekend and weekdays, so you get the opportunity to see the evening shows while also getting the opportunity to enjoy lower crowds during the week. If you’re accustomed to the Magic Kingdom, Disneyland Park is going to feel instantly familiar to you, and indeed, things are laid out similarly to Florida — as you’re walking down Main Street U.S.A., Fantasy Land is right in front of you, Tomorrowland is to the right, and Adventureland and Frontierland are off on the left. While not everything is in the same location as in Orlando, most attractions are at least in the general vicinity of where you’re expecting them to be.

With that said, there are significant differences. Disneyland Park doesn’t have a Liberty Square, but it DOES have three additional lands that you won’t find in Florida.

It bears mention, and I say this with love, that those accustomed to the grandeur of Cinderella Castle at Disney World are likely to be underwhelmed by Sleeping Beauty Castle. I have to admit, the first time I saw it in person, it was less awe, and more “awwww” — it’s more cute than jaw-dropping. Rather than thinking of it as “small,” “unimpressive,” or “shorter than my house,” however, might I submit that the better way to think of it is the perfect match for the compact, charming environment that is Disneyland’s Main Street U.S.A. Having spent a fair amount of time at Disneyland now, a larger castle would frankly seem garish and out of place. Enjoy it for what it is!

Finally, you should not necessarily skip an attraction at Disneyland just because you’ve already experienced it at Disney World. Pirates of the Caribbean is one such example, the facade of it’s a small world is an attraction unto itself, and Disneyland’s silky smooth version of Space Mountain also springs immediately to mind.

Regular readers of our blog and the Unofficial Guide are well aware that arriving before park opening is one of the best ways to get a lot done without waiting in huge lines, and that most certainly holds true at Disneyland as well.  If you’re used to going to Walt Disney World, you may also think of the end of the night as a great time to get a lot accomplished with short waits, too, but that is far less the case at Disneyland. Disneyland is at its core the most famous local theme park on planet Earth, and unlike Walt Disney World, where families are on extended trips and will often turn in early to save energy for the next day’s adventures, many visitors at Disneyland are locals that tend to come later in the day and stay there pretty much through the park closing. As a result, the lines never really drop off in a serious way.

Moreover, California Adventure tends to close before Disneyland, so there’s typically a late rush of guests that will watch World of Color (DCA’s nighttime spectacular) at the end of the night, and then head over to Disneyland Park to get in a few attractions before the end of the night. It does get less crowded at the very end of the night, but the drop off is not near to the same extent as what you see at Disney World, especially with respect to headliner attractions like Space Mountain. The morning is the best time to get ahead of the curve, much more so than waiting for crowds to dissipate in the evening.

One other tip on getting a lot done in not a lot of time: take advantage of Disneyland’s many single rider lines. This article on solo Disneyland travel discusses them in depth.

Are you accustomed to waking up at the crack of dawn 180 days before your Disney World vacation to book your dining reservations? Rest easy at Disneyland. Dining reservations aren’t even available until 60 days before you arrive, and it’s frankly unnecessary to book at the earliest possible opportunity to secure a reservation anywhere. Most places have plenty of availability a week or so prior to the date you intend to eat, and there will be quite a bit of day-of, or even walk-up availability as well. If there’s somewhere that’s critically important to you, maybe book a month out to be safe, but it’s unnecessary at most places. Noteworthy restaurants include Blue Bayou at Disneyland Park, Carthay Circle at California Adventure, and Napa Rose at the Grand Californian; it’s probably worth booking these a bit earlier than most, but even these will likely still have availability in the short term if you’re not picky about time. While eating at Disneyland isn’t difficult, food there is a big deal, and there are several iconic snacks beyond the Dole Whips and Mickey Bars you’ve also had in Florida. First among them is the Disneyland churro which, for the uninitiated, is basically a long, slender, delicious doughnut dusted with cinnamon sugar, often served with dipping sauce. Yes, you can get churros at Walt Disney World, but friends, it is simply not the same. Churros are plentiful at Disneyland — my personal favorite place to get one is at the cart in New Orleans Square because when they do have “limited edition” churros you can usually find them here. But you’ll find them all over the place — and there is nothing more Disneyland than walking around eating a churro.

A close second, however, is walking around whilst eating a Disneyland corn dog. You may recall that I am a big fan. I’m not alone in my love of this Disneyland staple, however, and there is unquestionably something about these hand-dipped dogs that elevates them beyond the everyday.

There are plenty of other iconic Disneyland snacks, but the Mickey-shaped beignets you can find tucked away at the Mint Julep Bar in New Orleans Square are also worth highlighting. They’re soft pillows of fried dough dusted with powdered sugar, they’re shaped like Mickey Mouse, and they’re incredibly tasty. Not much else needs to be said. Get them.

There’s some broad info here to help you map out your trip, but there’s still the matter of what attractions you NEED to do, and which you can skip. That’ll be next week. Please check back for more!

So, any questions in the interim? Agree or disagree with anything in here?  Let us know in the comments!