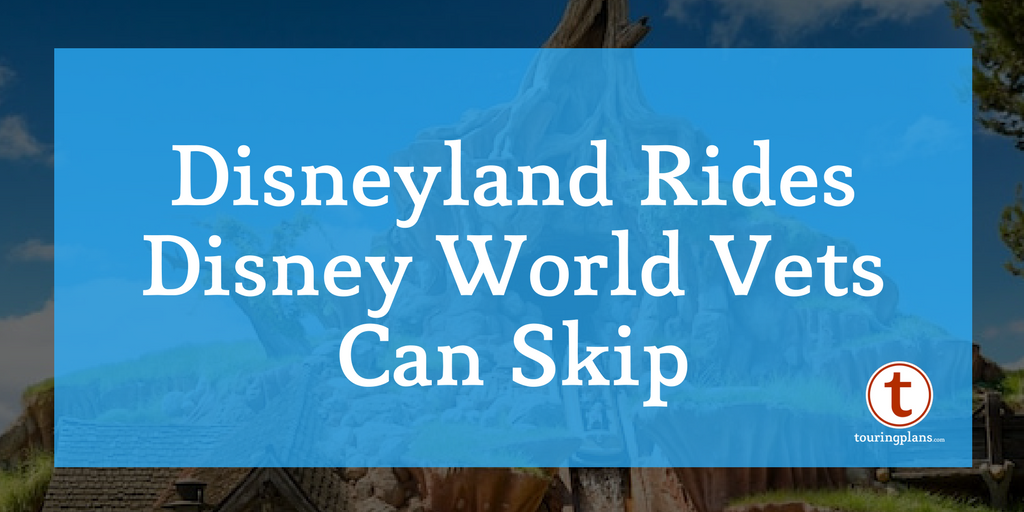 Guy Selga is back this week with more advice for your Disneyland visit. Today he looks at what you can skip if you’ve already been to Walt Disney World. Got more questions for our Disneyland expert? Ask in the comments. We’re always looking for more article ideas.

If you’re a regular Walt Disney World visitor that visits Disneyland you will find many exclusive rides to enjoy. Other rides, such as Pirates of the Caribbean, exist in both resorts but Disneyland’s version is arguably better due to it being longer and more richly detailed. On the flip side, some rides in Walt Disney World are better. Many people pick Magic Kingdom’s Haunted Mansion as an example of this. Here are 6 Disneyland rides that Disney World fans can skip, as well as some suggestions from some friends of mine. Star Tours fits naturally in to Disneyland’s Tomorrowland, but there’s no differences beyond the exterior to make is stand out over the attraction at Disney’s Hollywood Studios. If you do chose to ride it at Disneyland you may find yourself waiting a bit longer than you would have to at The Studios. At Disneyland there are 4 Starspeeders to accommodate guests, while at DHS there are 6.

The two Little Mermaid rides are the same at DCA and Magic Kingdom (except for a cameo by Incredible Mr. Limpet in the Under the Sea scene). Sure, both the queue and exterior are way nicer at Magic Kingdom, but DCA has the benefit of being a walk-on pretty much every day of the year.

Soarin’ Around the World

Soarin’ at Disney California Adventure is located in the beautiful Grizzly Peak Airfield. In Grizzly Peak you’ll find woodsy theming appropriate to a national park in the High Sierras. The interior portion of the Soarin’ queue features pictures and biographies of legendary California aviators, as well as parts from actual aircraft. A difference on the ride itself is the ending where you fly over Disneyland instead of Epcot. These minor changes don’t make it worth going out of your way to see if you’ve already ridden it at Epcot. Disneyland’s Pooh ride is cute, and it’s very little kid friendly. But if you’re a frequent WDW visitor there’s not really any reason to experience it. Both versions have minor differences when it comes to scenery but the basic storyline is the same (a blustery day, a party for Pooh, and acid trip heffalump and woozles nightmare, etc).

Although I will say this, due to its remote location (it’s tucked away in a remote corner of the park), Disneyland’s Pooh ride sees some of the lowest wait times in Disneyland. That reason alone may be a good reason to give it a try.

It’s Tough to Be A Bug

A Bug’s Life may have an entire land at Disney California Adventure, but for some reason this 3D movie still feels more at home at Animal Kingdom (where it is located inside the Tree of Life). Besides that, it’s the exact same movie, soundtrack, in-theater effects, etc.

Toy Story Midway Mania is an obvious choice for WDW fans to skip at DCA. There’s nothing different between the version at Disney’s Hollywood Studios except for the queue. The queue at DHS looks like the inside of Andy’s bedroom, with large toys seen throughout. The ride at DCA is themed after a vintage boardwalk/carnival ride so the line is barebones, mostly consisting of outdoor switchbacks. The DCA version of Toy Story Midway Mania does still have the Mr. Potato Head animatronic. Luckily WDW fans who miss him can see him without waiting in line, he’s visible from the walkway in front of the attraction.

Tom Bricker from Disney Tourist Blog has this to say about Autopia.

While Autopia is better at Disneyland than Walt Disney World, neither version is particularly noteworthy. The essence of the experience, in both cases, is allowing kids to take the wheel before they are of age to drive. That is unchanged between the two parks.

Katelyn Woytych says to skip a ride that may not be the same, but is close enough.

I always avoid Goofy’s Sky School. It’s pretty much exactly like Primeval Whirl in Animal Kingdom, which is one of my least favorite attractions at WDW.

Jeanine Yamanaka from All Ears has a few recommendations

Astro Orbiter, Mad Tea Party, Toy Story Midway Mania, Dumbo, and any of the movie trailer preview locations. There might be some differences in Launch Bays, but if time was tight, I’d skip that too. Star Tours and Soarin’ would probably be top of my list as well, but I’ve found Pooh to be different enough where many WDW folk are interested in riding it.

Keith Gluck from The Disney Project has some good points as well.

In addition to Guy’s picks, I have three other recommended rides to skip If you’re a WDW vet. Pick number one is easily the Astro Orbitor. Not only did the “1990s Tomorrowland Massacre” ruin the attraction’s aesthetics, but the entire ride system was removed from atop the (still defunct) Peoplemover loading area and placed on the ground at the entrance to Tomorrowland. If you guys want  to experience non-elephant ground-level spinning, you already have The Magic Carpets of Aladdin. That leads perfectly into the second pick, Dumbo. Of course it’s a classic, but contrary to popular belief, it is not an Opening Day attraction, and you guys already have two. Third and last on my short list is Splash Mountain. Unless it happens to be a scorcher in Anaheim that day, our Splash, while being the original, won’t particularly improve upon the version found in Lake Buena Vista. Although it might have you asking, “Where was Br’er Frog?” upon exiting.

Disney World fans, what do you skip when you visit Disneyland. Sound off in the comments below.

16 thoughts on “Disneyland Rides That Disney World Fans Can Skip”