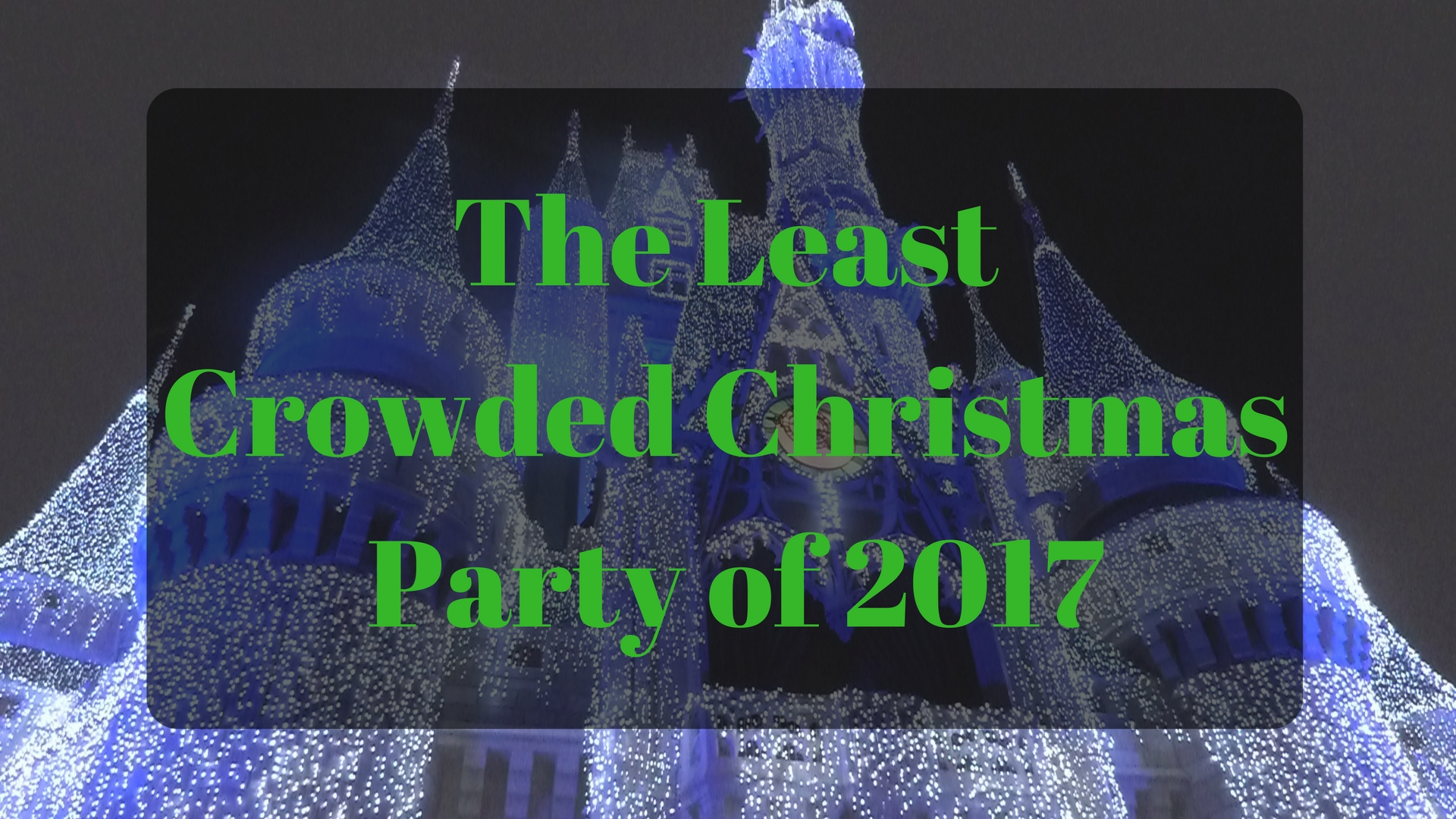 Here I am once again to review the information from last year and give you an even better projection for the least crowded Micky’s Very Merry Christmas Party 2017. Make sure you check out our dedicated page for a complete list of dates as well as a thorough description of what the Christmas party is.

In short, if you’re looking for the best Mickey’s Very Merry Christmas Party 2017, we recommend Tuesday, December 5, 2017. The equivalent date was the party last year with the lowest wait times and has been very low in the past. It’s a Tuesday, early in December, far enough away from the first party for the initial rush to subside and far enough from Christmas to avoid that rush as well.

As I’ll explain below, we’ve made some adjustments to how we calculate the best party to attend, although since I’m sure you’re wondering how we did with our recommendations last year, the answer is…not too bad. Here are the top 5 from last year’s recommendations:

[As a quick aside, it’s interesting to note that the average wait times had gone down each year that we had monitored them–until 2015. The past two years wait times have gone up, indicating that maybe they’re either letting more people into the parties or moving people through attractions more slowly. Probably both. Aside over, back to the best Mickey’s Very Merry Christmas Party 2016.]

As you can see, our predictions performed pretty closely to what we thought they would, except for that November 10 party. Remember how I said above that the wait times were increasing? Well the average peak wait time during the Christmas parties used to be around 11 minutes, while the average wait for the 2015 party was 11.7. In 2016, that jumped to almost 14 minutes–still not very high, but a significant jump.

We fiddled with the formula a little this year so that we now consider more than just attraction wait times. We now also consider if previous parties sold out and we look at the crowd ratings for the daytime hours. We did not include the price in our calculation, even though the price is variable. We’ve found that the price differences even out the crowds as they are intended to do. You may notice below that the higher-priced parties are dates that have sold out in the past, although we weighted the 2016 sellouts higher and fewer parties sold out last year. No doubt attributable to the higher price–as well as a possible higher attendance threshold.

The result is something that we hope will be an even better representation of crowds. We present the chart below in order to give you as much information as we have so that you can make an informed decision.

One more quick note: Previously all party days had the Magic Kingdom closing at 7pm, but in 2017 days with Christmas parties are listed as closing at 6pm. The scuttlebutt we are hearing is that they are doing that to prevent non-party guests from scheduling a 6:55pm dining reservation in the park. Apparently Disney’s reservation system can’t be adjusted independently from the park schedule–something that will not shock anyone who’s used Disney’s website or app. Why aren’t the Halloween party days closing at 6? We don’t know, but our theory is that they didn’t think of it until they were already inside the 180 day dining reservation booking window.

We don’t know yet if they will begin sweeping the park at 6pm, gently ushering out non-party-goers (those without wristbands). We don’t expect there will be any actual operational downtime, so if you are in the park between 6pm (official closing) and 7pm (official party start) we highly doubt they will shut down attractions.

Our wait times only include attractions−not character meet and greets, special shows, or parades. The characters, in particular, often have long lines, especially for rare characters like the Seven Dwarfs. Regardless of which party you attend, some of the character lines will be long. If those are a must do, do them as early in the evening as possible.

Some of the previously-held ideas are out the window here. Earlier in the season is not always better, but it’s better than the last few parties. The other thing that throws a turkey-shaped wrench is Thanksgiving week, where there are no parties at all. That means that the last party before the break (November 17) and the first party after (November 26) get busier. We also demoted the first two parties of the year because they’ve been a little more crowded as of late–the lower ticket prices, locals checking out new things, and previous “go early” advice probably all contribute.

Mid-November through the first week of December looks like the hot spot, with the exception of those Thanksgiving bookends. Those parties are after the initial interest of the early parties, but before the real Christmas spirit kicks in. Those are the ones we recommend.

Looking for more information? Good, because we have a lot for you. Savannah Sanders wrote a post full of savvy tips that will help you whether this is your first trip or your 100th (and if it’s your 100th, you might have a problem…being too awesome).

If meeting characters is your main priority, the bossman himself, Len Testa, wrote a fantastic (yes, I’m kissing up) piece about strategy for character meets during Mickey’s Very Merry Christmas party. If you haven’t decided if the cost is worth it you should read Kristina Murphy’s post about that very subject.

Now that you are armed with the most powerful weapon…knowledge, you can plan your trip to Mickey’s Very Merry Christmas Party 2017. This site will help you find all of the party info.

Hopefully this analysis will help you choose the best Christmas Party to attend. Merry Christmas (a little early)!