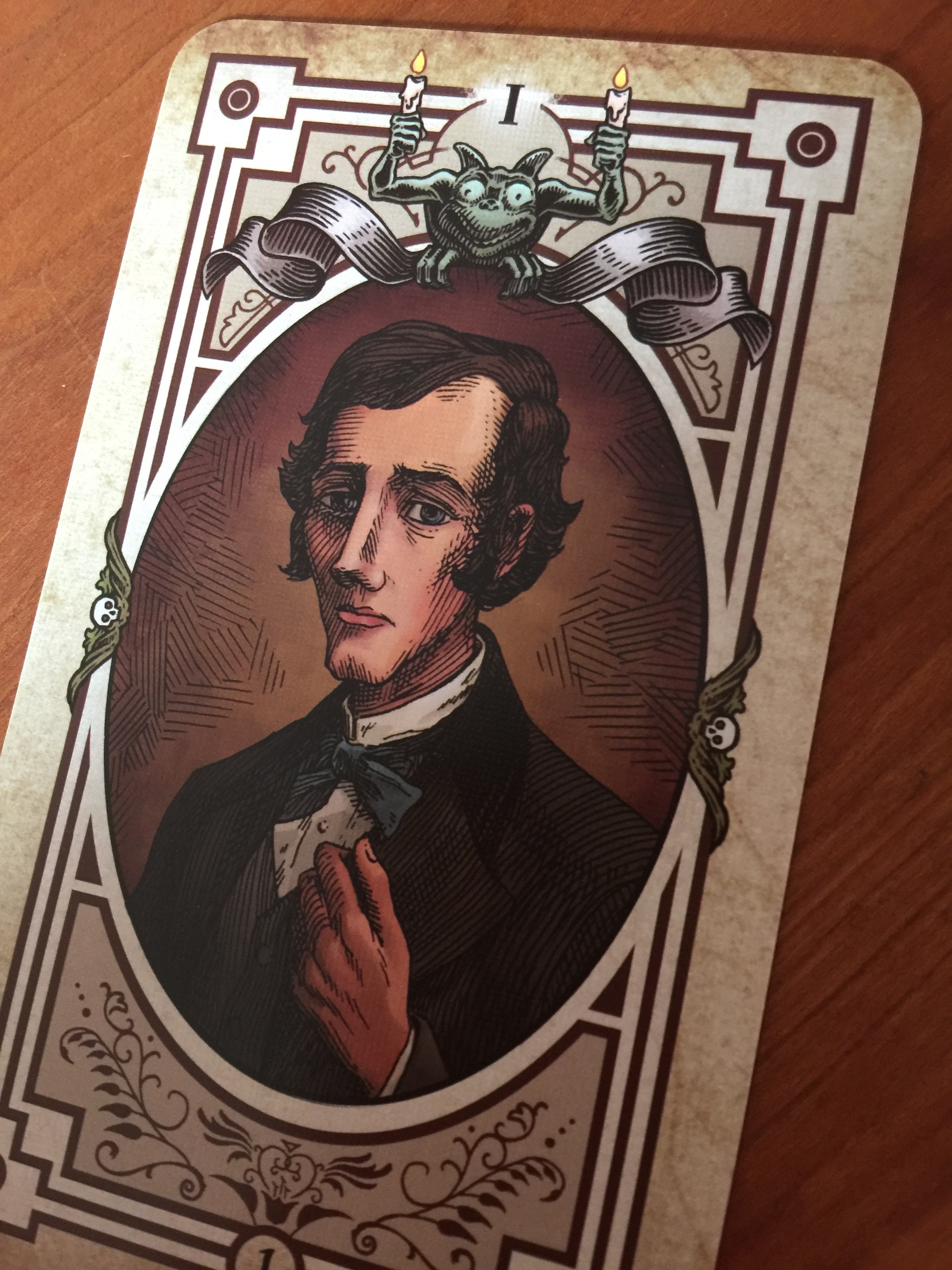 Disney groupies (*raises hand*) may recall that about a month ago Disney launched a mysterious website, the “Ghost Relations Department.” The site initially advertised a limited edition (of 999,ha!) Haunted Mansion-related subscription box service. Details were sketchy, but the gist was that for the low low price of $199 you would get some sort of box filled with unspecified Haunted Mansion stuff, monthly for three months. The box promised to hold objects and artifacts related to the Mansion, as well as interactive element, and an unfolding mystery story. Potential purchasers were told that in order to have full access to the interactive elements, they would need to have an iPhone. (All the 999 subscriptions were claimed. The page below originally included a link to purchase on the Disney Store website, but the link is now gone.) Because I have an unnatural compulsion to open my wallet for all things Disney, I bought this subscription service, not really knowing what I’d be getting.

Since I didn’t know exactly what I should be expecting or when it would arrive, I was a bit perplexed when a plain cardboard box showed up on my doorstep this weekend. There was no Disney return address or other source markings on the outer carton. But as soon as I opened the box and saw the faux steamer trunk printing inside, I remembered what I had ordered. Opening the box, I still didn’t quite know what I had. The immediately visible contents included an ornate teacup, a packet of cards in a translucent envelope, a small piece of statuary, a larger envelope, and a note. The note mentioned additional items hidden in the large envelope. These were:

The radio kit came with clear assembly instructions, so that was the first thing I did. Building the radio took about two minutes. Additional information in the radio kit was a card with a link to the Haunted Mansion Phantom Radio app available on the iTunes app store. Once downloaded, the app had to be initialized with a unique password provided on the card. (I’ve obscured mine. Sorry.) Beyond that, my only clue about what to do next came from the P.S. on the introductory note, “The ghosts have added their own messages to this letter. Most mortals find spirit writing easiest to read when the paper is dampened with water.”

Um, okey dokey. I went to my kitchen and lightly wetted a paper towel. I then wiped the letter with the towel. I was hesitant at first, because I didn’t want to ruin anything before I had really gotten started. As it turned out, wiping the letter was the exact right thing to do. A hidden message was revealed. (The message also becomes hidden again when the special paper dries. I ended up wetting the letter several times.) The secret letter read, “To Whom it May Gravely Concern, We can no longer keep our haunting promise – to follow our visitors home. We’ve noticed you at our Mansion and sensed that you may be particularly attuned to our spirit ways – the perfect mortal to render assistance. Only a talented mortal, deeply connected to the spirit world, will be able to detect the haunted qualities of these objects and scan each item – in all states – to form new resonances with the Haunted Mansion using the Phantom Radio. Align these [symbols on the Bloodmere advertisement] to Aunt Agony [a column in the Grim Gazette newspaper], we have a message for you. [After the wedding announcement] When frozen or exposed to the chill of the crypt, this artifact will undergo a disquieting metamorphosis. [The radio housing] To impart to it a right and seemly aura of foreboding. [The bat statue] This creature may prove helpful for tuning in spectral frequencies. [The teacup.] Especially useful for reflecting upon the tea leaves in the newspaper. Use with care!”

It was now apparent that this is a multi-part puzzle to solve. The overall impression was similar to what I’ve experienced playing the old Myst computer game or participating in an Escape the Room activity.

Following the instructions in the hidden message, I used the Phantom Radio app to start scanning the various object in the box. As I scanned each item, I got a message, “Enter in the Symbol Code.” Upon further examining the objects, I noticed that each of them did indeed have an imprinted trio of tiny symbols. See the bottom of the teacup, the card packet, and the bottom of the wedding invitation above for examples.

Each time I scanned and entered the symbol triad, a different “station” on the Phantom Radio became activated. I was initially confused because it seemed like the radio should be working, and indeed a transcript of the activated station became available on the app as I scanned each item, but I couldn’t actually hear anything. I turned my volume all the way up. Still nothing. It took the genius of my 16 year old daughter Louisa to figure out that my phone was on “vibrate only” mode. Once she flipped the switch for me, we were good to go.

One of the radio stations was devoted to a describing a simple card trick. Listeners were instructed to lay out the ten “Tarot” cards in a specific order and perform a sequence of shuffles and cuts with the deck. In the end, Madame Leota “knew” what order your cards would be in. A key element of the trick involved the depiction of both ghosts and foolish mortals on the cards. It was silly, but still amusing.

Some of the radio stations were unlocked by a simple scan, others took a bit work. Remembering the “metamorphosis” mentioned when the wedding invitation was exposed to a chill, Louisa (who was now on board to help me solve the puzzles) put the invitation into our freezer. As soon as it hit the cold air, a new message was revealed. A key part of the transformation was the unveiling of an additional set of small symbols on the invitation. These were necessary to unlock another radio station. Another important aspect of the damp introductory letter was the mention of “reflecting on the tea leaves.” Here we turned to an advertisement for tea in the Grim Gazette. We used the reflective surface of the tea cup to uncover the message “Beware Madame Leota.” By strange coincidence, I had read an article about anamorphosis just the week before. Had I not done this, it might have taken me a bit longer to figure out this step, but because I had recently seen catoptric art, this puzzle was quickly solved. The last immediately apparent puzzle involved the Bloodmere and Broome’s Re-dusting ad flier. The instructions in the dampened letter mentioned aligning symbols on the ad with similar symbols in the Grim Gazette. Doing so uncovered the message, “keep this for waltzes next month.” My guess is that the dot pattern will be fed into some sort of music box or player piano gizmo to make music. I don’t know if I’m correct, but I’m excited to find out. The multi-month aspect of the mystery is intriguing. Once I solved the puzzles and scanned every object, all the radio stations on the app were unlocked and I was instructed to insert my “modern device” into the radio housing. We still had not used the small bat statue, but the statue base was the exact same size as the round slot on the radio, so we popped it in. Evidently that was exactly what we were supposed to do. Rotating the bat in the slot served to turn the stations on the radio. I’m still not sure how this was accomplished. The bat was not touching my phone at all, and there was essentially no movement of the radio or the phone when I turned the dial. I’m impressed with this technology. Magnets? Something else? If you have an idea, let me know in the comments.

Cycling through the radio stations we heard bits and pieces of conversations between various ghosts and between the ghosts and Madame Leota (who is none too happy to have mortals involved in underworld business). In the static space between the stations were sound effects and music from the Haunted Mansion attraction.

Putting together the bits of information from the radio we learned of an unspecified mystery that needs solving in the ghost world. We don’t know exactly what it is yet, or have all the tools to solve it, but there are two more boxes to come.

Overall this was a charming activity, which became more fun once my daughter joined me. It’s definitely the kind of thing a family with older kids could do together. I’d say if your kids are decent readers about age 8+ they’d have a blast pitching in. Louisa and I spent about two hours examining the pieces, reading the newspaper, solving puzzles, and listening to the radio. We’re ready for more.

Oh, and one last thing, there’s a note on the Phantom Radio app that you can use some of the Tarot cards to interact with something at the Magic Kingdom park. I’m at home in New York now, but I’m definitely going to bring the cards with me during my next trip to WDW in early May.

What do you think? Is this something you’d be interested in having? Was the price point a deal breaker for you? Do you want to see posts describing the next two boxes? Let us know in the comments below.