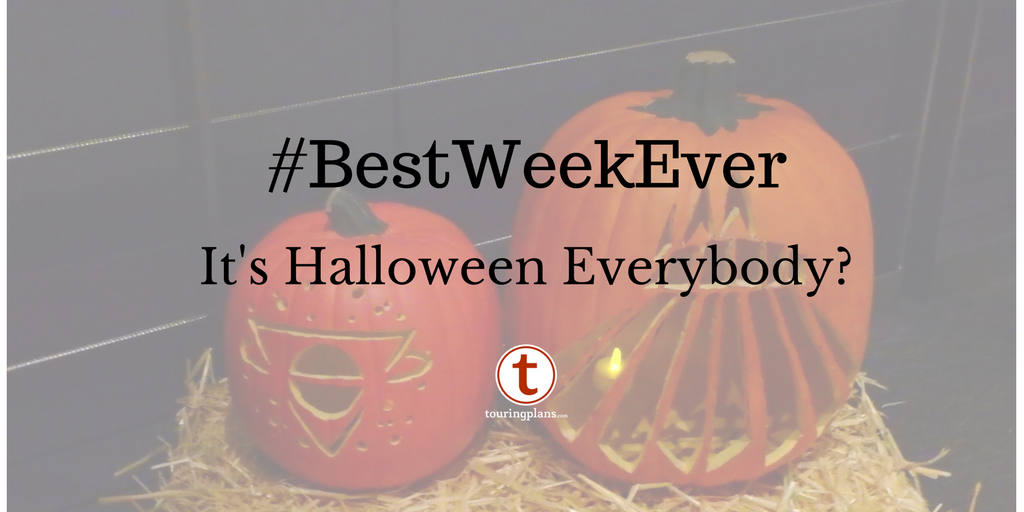 Unless one very lucky reader out there is the one that won PowerBall last week, most of us probably are looking at our tickets and thinking “That’s okay, I usually don’t win anything anyhow.” Last week, I saw a Disney Parks Blog contest for tickets to the first Mickey’s Not So Scary Halloween Party of the year, and so I entered expecting my chances to be about equal to that of PowerBall. Well, luck was with me for that! I won tickets for two….for my family of three. (Awkward.) A few credit card charges later, I had tickets for the third in my party, and our “free” Halloween Party and dessert party was set (for a cost of $150). We had gone last year just to the party and had a blast, but were planning to skip this year. I really can’t turn down a chance to go to this party, though. Feel free to tag along… if we can have Christmas in July, why not Halloween in August, right? This was the scene when we arrived. An unnamed tropical system (not related to the devastating effects of Harvey) had been sitting over Florida for several days, and so storm clouds were solidly predicted for this night as well. Still, we decided to press on, as it had been rainy when we went last year and miraculously cleared right at the start of the party. Besides, how can you not be excited seeing those giant inflatable pumpkins on the autoplaza? Our first stop was to get the limited edition (but free) Sorcerers of the Magic Kingdom card. Our daughter has really gotten into Pokémon cards over the summer, and so when it is cooler, we want to introduce her to SotMK. Last year, we tried to get the card at the end of the party, only to find they closed the Fire Station where you get the card at 11:55. This year, we weren’t going to miss it, and we weren’t alone. Look at the line at just a few minutes after the party started! We then picked up our candy bags and headed over to Tomorrowland for a quick ride on the PeopleMover while we tried to figure out our evening plans. (Having less than 24 hours notice really makes getting plans figured out challenging!) As we walked through Tomorrowland, I saw one of my all-time favorite characters from one of my all-time favorite movies at the Tomorrowland dance party. George Sanderson!! Don’t remember who George Sanderson is? He’s Mr. 2319 himself. Check out the sock on his back. After a ride on the PeopleMover, we headed over to Cosmic Ray’s to grab a quick snack to tide us over until the dessert party. One of the most amazing things about the Halloween party is that you are always running into characters everywhere. In this case, I rounded the corner and found Tweedledee, Tweedledum, and the Queen of Hearts. We planned to do some trick or treating, catch the parade, have some desserts at the dessert party, and watch Hallowishes. Anything extra that we did would be a bonus. One of my favorite places to get treats is back at Pete’s Silly Sideshow. Waiting in one line, you get multiple stations, the line tends to be fairly short, and it is inside (out of the drizzle and in a/c). On the way over, we spotted the Goofy outside of the Barnstormer. We also spotted Donald and Daisy posing for pictures at the (thankfully turned off) Casey Jr. Splash Pad. On to Pete’s Sideshow, and a really great sign to mark the way. For candy? Oh, we totally dare! The cast members we ran into all evening were so enthusiastic about Halloween and looked like they were having almost as much fun as we were. I can’t say it often enough–cast members really make all the difference! After getting a ton of treats, we did a couple more walk-on rides and then decided to head to the Tomorrowland Terrace for the dessert party. Unfortunately, we were on the wrong side of the parade route from our destination, and unlike other nighttime parades long gone, there are no breaks in the parade for a quick crossing. Oops. It did mean we got to catch the parade as it went through, however, even though we were behind people and not able to really get any good pictures. No matter what, I love that parade. And eventually we made it to the dessert party with enough time to grab a plate of treats to wolf down before heading to the reserved area for Hallowishes. Out of all the desserts, I think my favorite was the Jack Skellington push pop. If you’re at the Halloween party, make sure to pick one up. It was delish! Even though the Parks Blog folks treated us amazingly well and we had a great time, if I had to pay the money for the dessert party, I probably wouldn’t. The price is really high for what you get. The one thing that was a huge plus was the private viewing area for the fireworks. We were given free reign of the FastPass+ area with the artificial turf, and with so few people in the area, we were able to sit on the “grass” to watch the fireworks without feeling crowded. It was probably the best fireworks viewing experience I had ever had at Magic Kingdom. This gives you an idea of how much room we all had. I didn’t bring the good camera gear out with me out of fear of the rain, but my waterproof camera did pretty good getting a few shots. When it comes to fireworks shells, now that Happily Ever After has debuted, Hallowishes seems less impressive. Do you think it is time for Hallowishes to get an update? Of course the perimeter fireworks make it extra special and always breathtaking. Once the fireworks were over, we had a little time to kill before the second Boo to You parade. We did a second quick ride on the PeopleMover, and then our daughter said she wanted to ride on the Speedway. Fun fact. I have never driven a Speedway car –ever. It didn’t look like this time I was going to, because my daughter wanted to drive, but in true Halloween style, our car was possessed. It literally shook us from side to side so savagely we both thought we were going to go flying off the track and I had to help hold the wheel steady. To top it all off, it had started raining as we were getting loaded. So it is dark, I can’t see where I’m going because of the rain, and the car has a mind of its own. I don’t think my daughter will ever let me drive anything ever again! (We had an amazingly fun time being scared and want to do it again sometime soon, maybe without rain.) To dry off a bit, we snuck into the candy station over at Stitch’s Great Escape. I figured the candy distribution would be in the lobby area, but there were just Jack-o-Lanterns there. The preshow area was actually “live” — the characters were moving around, but with no sound whatsoever. Yeah, it was a little creepy, but cool to see my pal Skippy! And we made sure to grab our candy on the way out, too. We came out and found that the rain had stopped, so we grabbed a spot for the Boo to You Parade. No question, this is my favorite part of the party, even if it is more difficult to get good photos than anything else at Walt Disney World. The parade float with Clarabelle Cow broke down after it had passed us, so we got to hear several minutes of Clara Cluck doing her solo. Eventually a tow truck zipped by, hooked up Clarabelle’s float, and away the parade went. It’s a little hard to see, but here’s the tow truck, with an itty bitty hidden Mickey! The pumpkin hour was drawing near, and we were all still pretty wet from the rain, so we called it a night. If you have the opportunity to go to Mickey’s Not So Scary Halloween Party, I highly recommend it. There really is something for everyone. Thank you once again to the folks at Disney Parks Blog for the opportunity to attend this wonderful event! It really did help make this a Best Week Ever!