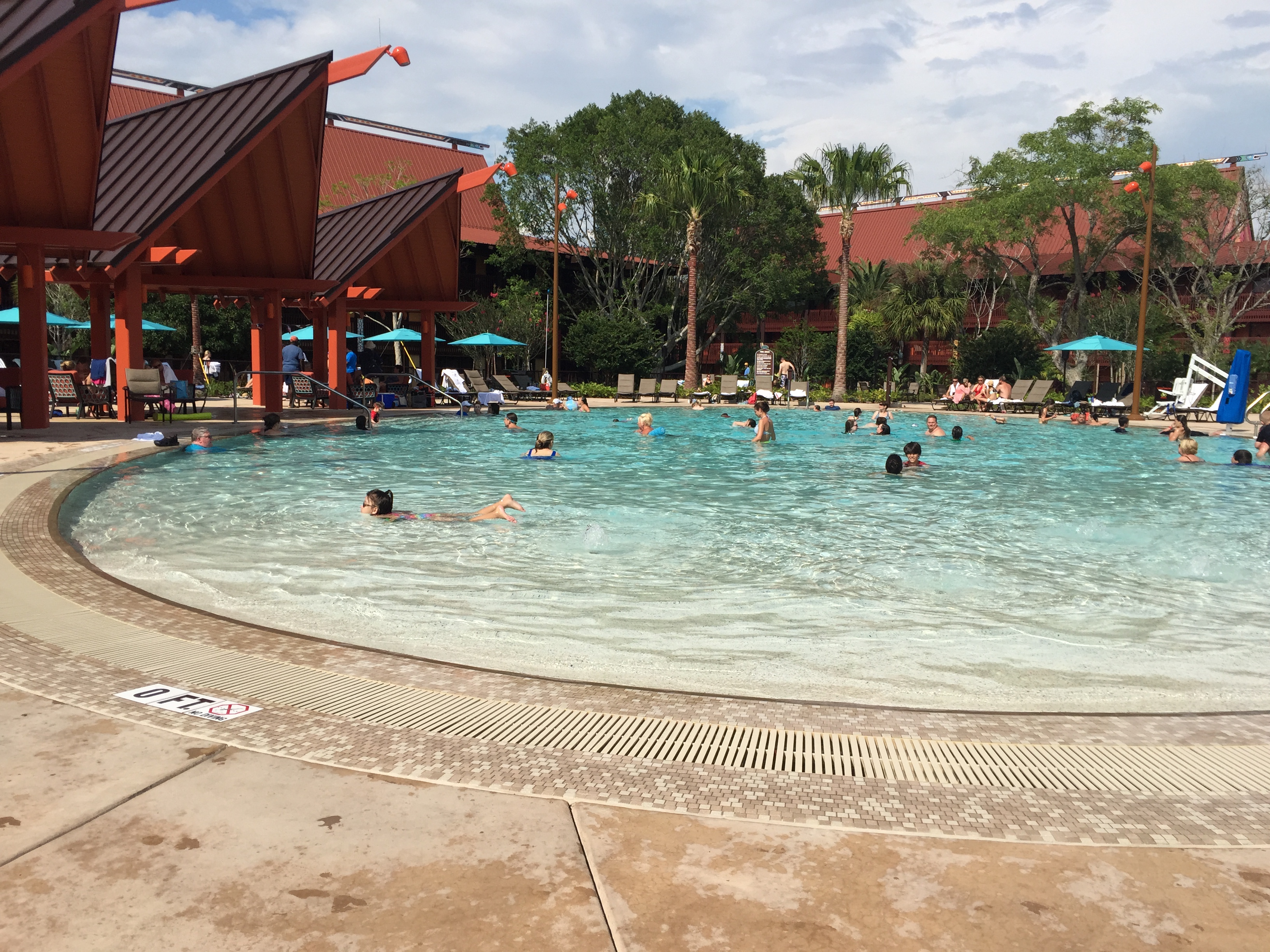 Recently, I got some great news in my career path, and my husband decided to surprise me with a weekend at the Polynesian as a way to say congrats. As “Aloha” can be hello or goodbye, much of our weekend was spent saying hello to new experiences and saying goodbye to an old favorite. I had already filled up the schedule with lots of experiences that I wanted to take on for the holiday weekend. First up was the first night of nighttime safaris at Animal Kingdom. When I made my FastPass+ reservation, I had not checked the time for sunset. Our time was 7:25-8:25 PM, and so I figured we’d have dinner then take a nighttime safari. We were toward the earlier part of our reservation time, and when we got on board, our driver mentioned that we might want to come back another day for a nighttime safari. Oops. That said, the safari at dusk was quite possibly the best one we had ever had. The animals were incredibly active and got very close to the truck more times than I could count. I’ve probably done Kilimanjaro Safaris a dozen times or more, but this is the first time that I can recall that the lions were doing more than lying on the rock. As we neared the corner, the male lion stood up on the rock and roared. It certainly was like living the Lion King life. We wandered around for a while longer, and then returned for an actual nighttime safari. For me personally, the nighttime safari is not all it is cracked up to be. If that had been our only safari of the night, it would have been disappointing. Think of it more as a scavenger hunt to find the hidden animals. The lighting effects were neat, so if you do decide to take a nighttime safari, understand that you’re going for the experience and not the views of animals. The next morning, we got a late start (thanks to the late night before), but our first plan of the day was a midday FastPass+ for Soarin’. I’ve taken so many different people on this ride, and I have yet to find someone who does not like it. I’m hopeful that the new version will be as great as the original, but it was a joy to see the original version one last time. It was made even better because it looked like they had switched from film to digital projection, so the movie was incredibly crisp and looked better than when I saw it when it first opened years ago. After our ride, we headed over to Imagination to play with the indoor games for a few minutes and plan the rest of our day. I had hoped that maybe the DVC Lounge would have a soft opening so we could grab some free drinks, but the official word is June 6. Obviously the heat had gotten to our brains, because we had the brilliant idea of leaving the car at Epcot to pick up later and just taking the monorail over to check in at the Polynesian.  Our room was ready when we arrived, and our MagicBands worked perfectly to open the door (for the first time that I can recall). We stayed in the Aotearoa building, which is a very short walk to the Great Ceremonial House, and had a beautiful Lagoon View room. Although we hadn’t had lunch yet, none of us were too hungry. It made for a good justification to split a real “vacation food” – the pulled pork nachos served on fried wontons from Capt. Cook’s. While the family napped, I took the monorail back to Epcot to grab the car, head home and pack (yes, we pack after we check in), and make sure the cats were given extra treats. Once back, we mulled over our options for dinner. Still not feeling overly starved, we decided to take the monorail over to the Contemporary and split a sandwich. More interesting than dinner, we grabbed a churro cupcake to split. Two out of three of our party thought it was awesome. (Our daughter did not find it appealing at all.) As it was still warm, we all changed and headed to the pool for a while. The kids’ water play area is exceptional, and I think Lily would live there if given the chance. She tried out both of the kids’ waterslides, and my husband and I performed “quality control checks” on comfortable chairs to enjoy dusk settling in. (Hint: The chairs passed – they were a quality relaxation experience.) Although we can hear the Electric Water Pageant from our bedroom at home most nights and we can see Wishes from our swimming pool, there is something about seeing it on property. In all our time, we have never seen it from the Polynesian Beach. (My daughter and I have never stayed at the Polynesian, and my husband was in high school the last time he stayed here.) On my Disney Bucket List was having a Dole Whip on the Polynesian Beach while watching the Electric Water Pageant and Wishes. This also allowed our kiddo to get a dessert she would enjoy—plain vanilla soft serve ice cream from the Pineapple Lanai. I went for the Dole Whip Float to get the souvenir cup to commemorate the experience, and we sat on the beach to watch the nighttime spectacles. Bucket List Item: Check. The next morning, we had what typically would be a late morning breakfast: 9:15 AM at Tusker House for the Jungle Book: Alive with Magic dining package. Thanks to the late night, it took a bit of umph to get us there, but we arrived right at 9:16 and were seated promptly. As always, Tusker House is a great combination of character interaction and unique breakfast foods. I especially enjoyed sampling the different chutneys. After checking in on the cats, it was time to head back to the pool. Eventually, hunger got the best of us, and we decided to take the sign’s advice and check out the Oasis Bar for food. The menu looks good, but at 1:30 PM, it was still not open. A quick scan of the MyDisneyExperience app showed available ADR times for Kona Café, however, so we booked that and walked on over.  We prefer lunch to dinner, and everyone was pleased with their food. Back to the room for a nap, and some time for me to work at one of the world’s best mobile office locations. For the evening, we headed back to Animal Kingdom and grabbed some light food to nibble on, then headed to the Jungle Book: Alive with Magic show. The weather looked somewhat iffy, but our view of the stage was great. We hadn’t been seated for more than five minutes when a very large lightning bolt seared from sky to land, causing everyone in the theater to jump. Pulling up the weather app, we saw that it was only about a mile or so from our position. By the time a second, even closer, lightning bolt appeared, Cast Members were ushering us out of the theater and letting us know the show was being cancelled. With the large crowd moving quickly for the park exit, and with lightning now less than a quarter mile from our location, we opted to hunker down in Restaurantasaurus while the storm passed. Within the hour, the storm had passed, and although we opted to skip waiting to see if the late Jungle Book show would be a go, we took our time to enjoy the beauty of Animal Kingdom at night on our way out of the park. We also stopped to watch some of the new effects on the Tree of Life. It is simply stunning to behold and may be one of the most magical things I’ve seen in recent memory at Walt Disney World. Monday morning meant time to check out and head back to “real life”. It wouldn’t be a stay at the Polynesian without Tonga Toast, though. We opted to have it at Capt. Cook’s instead of upstairs at Kona Café. Once we dropped everything off at the house, we grabbed lunch at The Wave and then headed back to the Polynesian to make the most of our pool time. During my stay at the Polynesian (which I would gladly do again if it were offered…say for someone whose birthday is coming up in a couple months…hint, hint?), I ran into a woman who was flushed and looked like she was ready to drop. I was still in my swimsuit with wet hair, clearly having come from the pool. She asked me how the pool was, and I told her that it was wonderful. She noted that she had just come from the parks and they were, in a word “brutal”. Watching social media all weekend, I saw wait times of two hours or more for prime attractions, and did see some people lose their cool with Cast Members and other guests. As the summer season starts, temperatures will be high and crowds may be higher. Stay hydrated, be excellent to each other, and remember that you are the person with the greatest power to make this your Best Week Ever! Postscript: Many members of my family have served in the military, and I’ve been blessed enough that they have all come back from their time of service. Sitting and watching the final scene of the Electric Water Pageant, we gave a silent toast to those who paid the ultimate price for freedom in honor of the Memorial Day weekend.