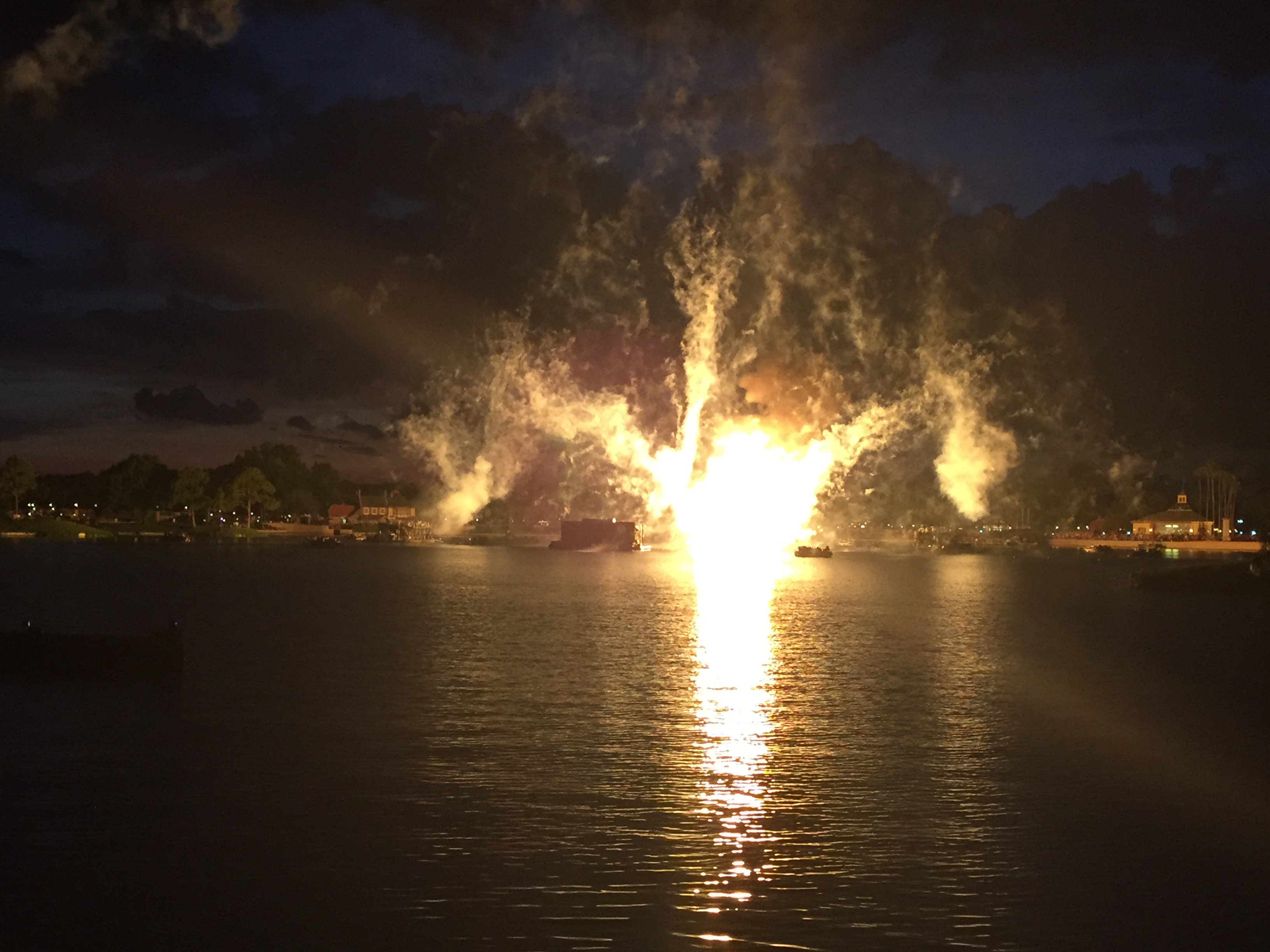 To completely ruin the writings of Robert Frost, “Some say your day at Epcot will end in fire, Some say in ice.” During this week, I managed to make both of those happen, and lived to tell the tale.

Unless you’re living in a troll cave, you’ve probably heard that the new Frozen Ever After ride opened in Epcot. I had not been a big fan of Maelstrom, and although I enjoyed Frozen, I am not a huge fan. Thus, the Frozen Ever After ride had very low expectations from me about whether or not I’d enjoy it. Because I do have a six-year-old daughter, I knew it would be in my best interest to get on the ride sooner rather than later, so I snagged FastPass+ reservations for the whole family for opening night as soon as they became available. However, being a glutton for punishment, on opening day, my daughter and I headed over to Epcot to be in the crowd of people all trying to be first. I will say that people were extremely polite and Cast Members were wonderful, helping grab strollers from people who were trying to make their way to the head of the line. Even so, a five-hour wait didn’t sound appealing, so we went for a different type of boat ride. After our tour of Mexico searching for Donald Duck, we had worked up an appetite. Also new to World Showcase is breakfast at La Cantina de San Angel, and I’m almost always up to trying some new food offering at Disney. I went with the chilaquiles con huevos, and didn’t recognize my meal when it came up. I’m used to Disney counter service only knowing how to make eggs scrambled, so these eggs cooked in a slice of onion and with yolks runny was quite a surprise. Generally, I don’t like runny eggs, but as this dish was designed to be stirred together, it worked exceptionally well, and I would order it again in a heartbeat. With the summer heat setting in, and my work e-mail inbox filling almost as fast as the Frozen Ever After queue, we headed home for the day. After work, the whole family headed over to try our FastPass+ luck for Frozen Ever After. Watching social media all day, we had heard about the five-hour-long waits, ride closures due to technical difficulties, and more. When we arrived, the FastPass+ line stretched all the way to China, and only FastPass+ was allowed to join in — no standby. The line moved quickly, however, and it was only about 20 minutes until we entered the indoor queue area. As we entered, we were given traditional Norwegian sustenance in the form of the Twix bar. I’m a big proponent of avoiding spoilers whenever possible, so I won’t share any details from the ride. (And if you really want to know what it is like, the internet is full of videos, pictures, and interpretive dance performances of the ride.) Once we got off the ride, every one of us wanted to get on the ride again. It is an enjoyable ride for all ages, and the effects in it are wonderful. I think that a good comparison to it is the Little Mermaid ride in the Magic Kingdom in terms of style of ride. Unlike the Little Mermaid ride that my daughter will do almost everything in her power to avoid going on because she doesn’t like it one bit, Frozen Ever After just feels good without being syrupy or campy. All in all, we waited about 45 minutes to get on the ride, and so by the time we rode Gran Fiesta Tour again and said hi to some folks who were in the park to cover the event, Epcot was shutting down for the evening. We did manage to catch a glimpse of Illuminations as we walked out of the park. Seeing that little glimpse of it made us realize that it has been far too long since we had made time to see Illuminations. That sounds like a Saturday night plan. After running some errands Saturday morning, we grabbed lunch at Yellow Dog Eats, which is one of those hidden gems a short distance from the theme park bubble, but about as far removed from that mindset as possible. You can read Daisy’s review of it here. We chose to eat upstairs, which gave us a chance to look for new graffiti written on the walls and furnishings. For me, although it isn’t a barbecue place, the pulled pork is more satisfying than actual barbecue for my personal tastes. My sandwich was a mess of pulled pork, gouda cheese, bacon, and fried onions, slathered in sauce. Following the meal, we had thought about going to the parks, but the heat combined with the onset of a food coma kept us home for the afternoon. When we decided to venture out, the temperature was still beyond the norms, even for this time of year. When the temperature is nudging the triple digits after 4 PM, it’s pretty brutal. No luck snagging a same-day FastPass+ for Frozen Ever After, but getting some for Soarin’ wasn’t a problem at all. This also allowed us to get some much needed a/c. As there was no line for Living with the Land, we jumped on that while pondering our dinner options. One thing that did not look appealing was the Carolina Reaper peppers, which are so hot that you have to wear protective gear when picking them. We grabbed dinner for our daughter at Sunshine Seasons, but still stuffed from lunch, nothing looked appealing. I jokingly suggested getting ice cream for dinner because that’s the only thing that would taste good in this kind of weather. Surprisingly, the decision was unanimous that it was a good idea. I had wanted to try Ample Hills Creamery for a while now, and because it was only a quick Friendship ride from the back of Epcot… I can justify that mine was meal-worthy, as I went with the oatmeal lace cookie flavor, which nutritionally is like eating a bowl of oatmeal (at least that’s my story). At some point, I need to arrange for a taste test for all the ice cream options at Walt Disney World. I don’t think I can choose a favorite. The ice cream made for a perfect (albeit not nutritionally sound) dinner, and heading back to Epcot meant that we could walk off a few of those calories. It was still too early to camp out for Illuminations with crowds being fairly light, so we decided to wander. A crowd was gathering for the Jeweled Dragon Acrobats. We had never actually stopped to see their full show (at least not since their previous version as the Dragon Legend Acrobats), so we decided to catch their show. The skill and flexibility of these performers is simply incredible. Even in the prime of my youth, I know I never would be able to bend, flip, and twist into the shapes they can make their bodies. Following their show, we headed over to our favorite Illuminations viewing spot and enjoyed what I feel is the finest nighttime show currently offered at Walt Disney World. The inferno barge alone is one of the biggest “wow” moments in a nighttime show. And so this journey has traveled through days ending in Ice (with Frozen Ever After) and Fire (with Illuminations). Which was my favorite? Like Robert Frost, “I hold with those who favor fire” (although I wouldn’t turn down a FastPass+ for Frozen Ever After again either…).  Then again, ending the day with ice cream for dinner? I think that qualifies as an appropriate diet choice if you’re having the Best Week Ever.