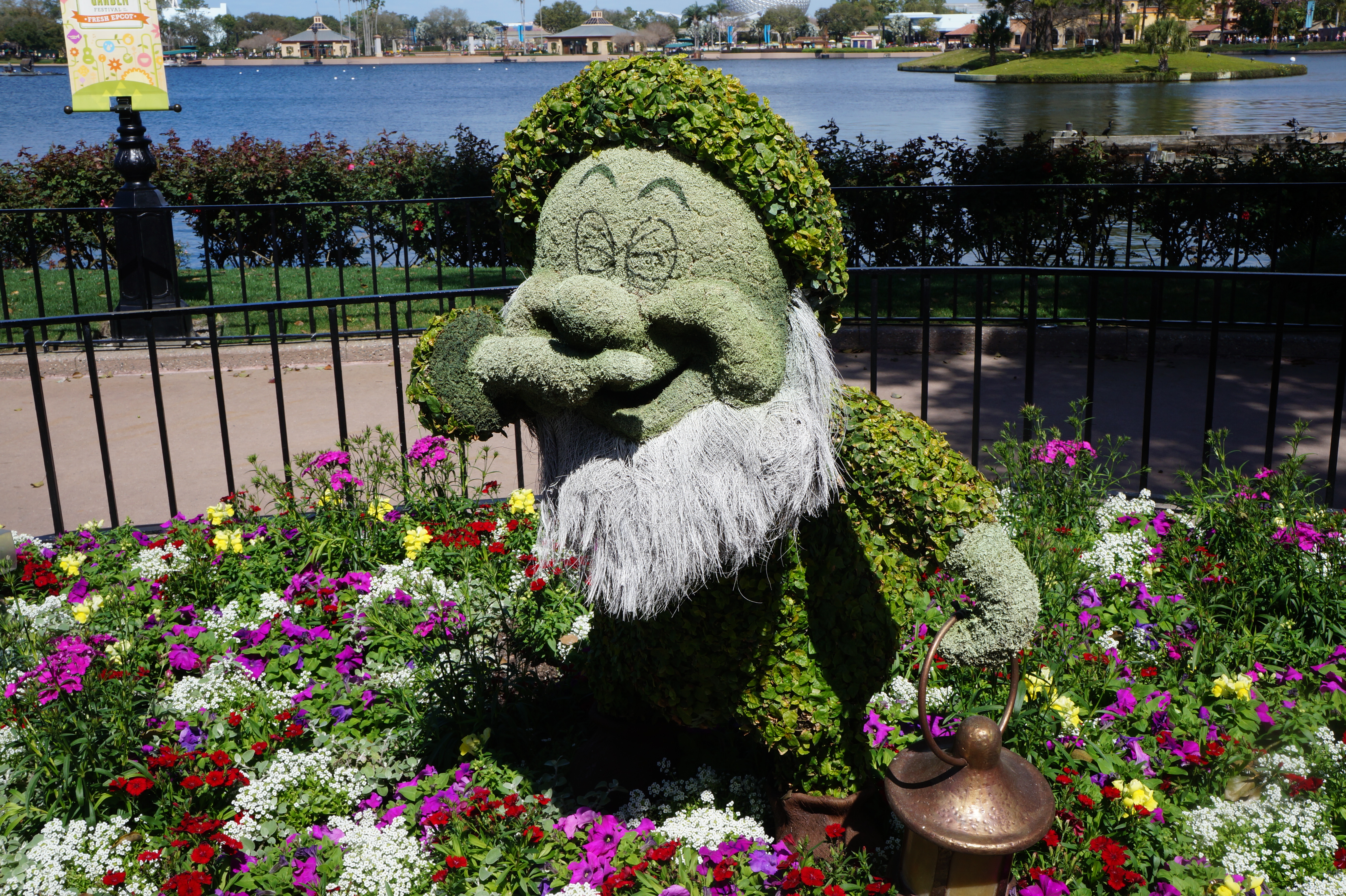 If you have seasonal allergies, you may have a love-hate relationship with spring. When I lived up north, I was thrilled to feel the warmer temperatures and know that snow shoveling season was ending. Of course that meant cars covered with yellow pollen, itchy and watery eyes, and sneezing, but it is a small price to pay for warmth again.

In Florida, where seasonal differences are more subtle, sometimes it is nice to have a reminder of the awesomeness that is spring. For me, the biggest reminder of spring is Epcot’s International Flower and Garden Festival. As soon as it opens, that’s where you’ll find me.

Opening weekend for Flower and Garden also was opening weekend for Epcot’s Easter Egg hunt. We had a blast doing it last year, so we knew we wanted to do it this year as well. It seems the word has gotten out about this fun event, as it took about 10 minutes in line to get our map. The map also comes with stickers that look like the giant eggs hidden around World Showcase. Simply walk to a country, find the hidden egg, put the correct sticker on the map, and take the completed map back to the redemption center for a souvenir character egg.

Next, we headed to the area behind Club Cool to wait in another line to get our free Annual Passholder prints. As anyone with a young child knows, waiting in line is the worst. Although our kid is awesome, by the time we had her waiting in both lines, we knew she needed to have a bit of fun. During Flower and Garden, there are two wonderful outdoor playgrounds available. The Cars-themed Cactus Road Rally is pretty much the same as last year, but the other playground has gotten a new look, so that’s where we headed–to the Music Garden Melodies playground.

Eventually, I could feel my skin starting to cook (although there are shaded seats available), so it was time to start the Easter Egg Hunt. We knew the maps looked different from last year, but were the eggs in different places? After our first country, it was pretty obvious that Disney has upped the difficulty level from last year. Not to spoil it for anyone, but here’s one of the twelve eggs–and this is one of the easier ones! With crowds starting to build, we grabbed a quick snack, got our souvenir Easter eggs, and headed for home because we had a full evening planned.

My Tables in Wonderland card expires at the end of the month, and with the higher price this year, I’m debating whether or not I will renew it. Before it expires, we thought about any restaurants we wanted to try out. We realized that although we’ve been to Cape May Café at the Beach Club several times, we’re always going with other people and never by ourselves. It wasn’t difficult to get a reservation, and after having the car valet parked (thank you Tables in Wonderland!), it was time for dinner. Truth told, I don’t eat crab legs and I don’t like mussels, so there’s a decent amount of the seafood part of the buffet that is lost on me. Strange as it sounds, my favorite part of Cape May’s buffet are the salads. The assortments are wonderful, and this time I enjoyed a kale and sweet potato salad that I never had before, along with favorites like the quinoa salad, the house salad with cranberries and blue cheese, and the watermelon salad with feta.

Okay, confession time — the salads are awesome, but I also adore the desserts at Cape May. If they would offer just a dessert buffet, you might see me there painfully often.

With the car valet parked so that we weren’t taking a parking space from a hotel resort guest, we had just enough time to walk off some dinner by walking over to the Studios for the Symphony in the Stars fireworks. We’re able to see the fireworks from our house (and every evening the windows rattle like an earthquake during the finale), but with the soundtrack, this is simply an amazing show. My favorite location to watch it is from the edge of Echo Lake. A benefit of not parking at the Studios is the ability to avoid the worst parking lot in all of Walt Disney World. The walk at night is a beautiful one and an easy walk, with serene views of Crescent Lake. Once we got the car from the valet, we headed home, with views of Illuminations all along the way. Illuminations is special for my husband and I (as he proposed to me during it), so we were both pretty nostalgic that night, knowing what the next day would bring.

Rewind back about a month–my husband comes home and says, “Uh, I’ve got some news. The team needs me to go on a work trip…. to Shanghai to help set up some systems for the Shanghai Disney Resort.” The next month was a whirlwind of getting a full passport secured, a travel visa, vaccinations, and me trying to find some legal loophole that would allow my husband to send me photos of the theme park under construction. (Alas, there won’t be any pictures coming from Shanghai Disney Resort from him.)

With his 20-hours of flight time looming on Monday, I jokingly asked what he’d like his last meal to be. He decided on The Wave for breakfast. The breakfast buffet is one of my favorites anywhere with sweet potato pancakes, all sorts of egg preparations, and grits with bacon and cheddar (and I don’t even like grits!). Because it is berry season in Florida, they had some wonderful strawberries, and also amazingly good raspberries, blueberries, and blackberries.

After breakfast, it was time to finish up the last minute packing and get my husband to a hotel near the airport so that he could be at the airport well before sunrise. Twenty hours in a plane isn’t my idea of fun, and I was very glad when I saw his flight had arrived. In the meantime, we’re counting the days until he comes back in true Disney vacation style. Next week is a busy week here, but I do hope to spend some of it at Epcot. After all, with beauty like this, who wouldn’t want to stop and smell the roses for another Best Week Ever. (All photos by Julia Mascardo.)