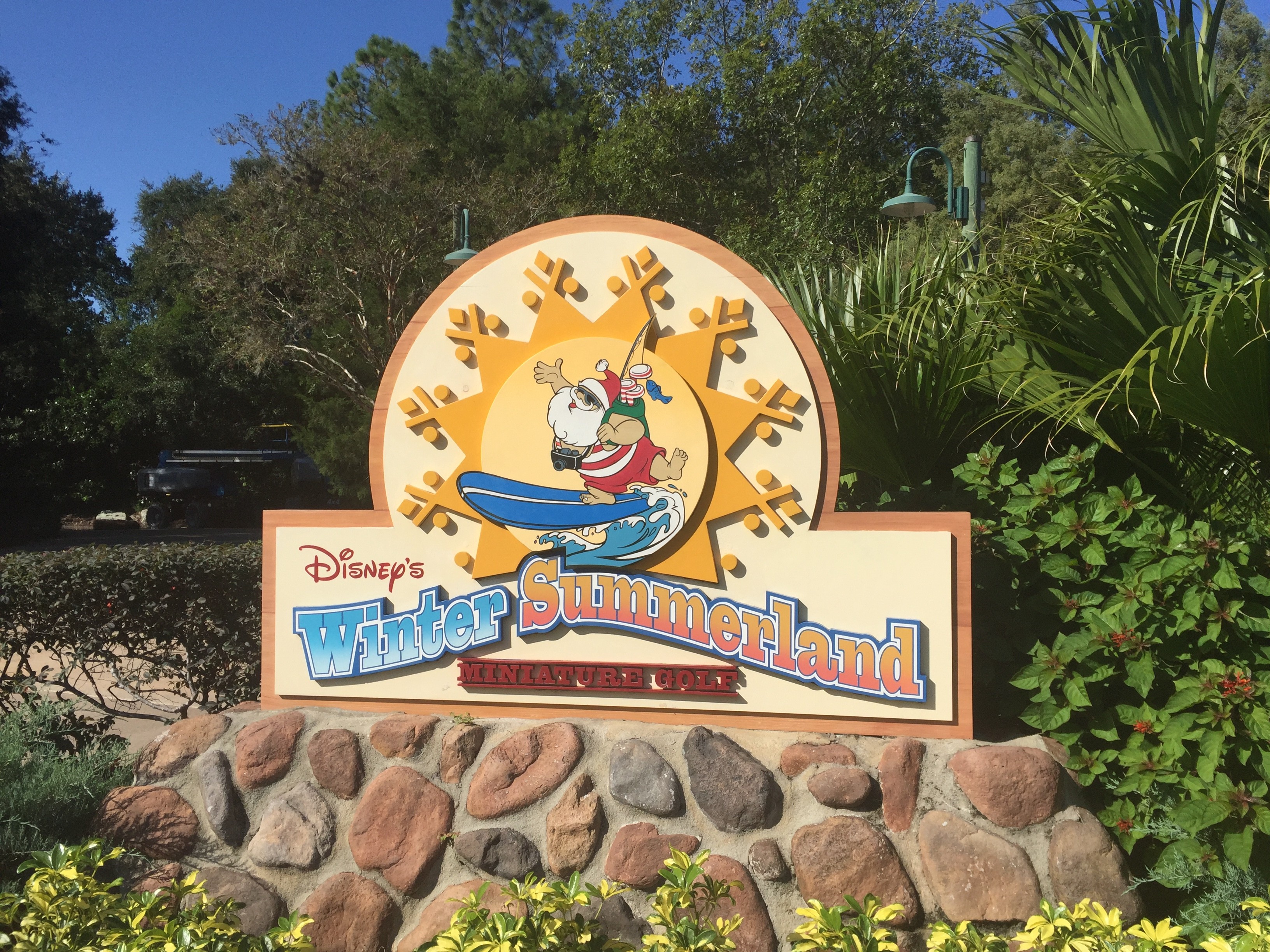 This fall, my daughter has been taking golf classes after school, and absolutely loves it. As a treat, we decided to spend some time over at Winter Summerland putting her skills to the test for some mini golf.

With Blizzard Beach closed for refurbishment, and arriving not long after they opened, we found that the parking lot was just a bit empty.

Later we realized that we had parked in the Blizzard Beach lot instead of the Winter Summerland lot. Oops. Even so, it was just a short walk to the chalet to check in. Winter Summerland has two courses — a Snow Course and a Sand Course. We decided to go with the snow course, and were told that it would be less than a 10 minute wait until we could get started. When our name was called, we picked out balls (green for my husband, yellow for me, and pink for our daughter) and got putters for our size. We agreed upon some simple rules–even though our daughter was the only one who has had actual golf lessons, we were okay with giving her some flexibility with strokes. (For instance, if she swings and misses the ball or barely nicks it so that it rolls inches, it doesn’t count.) For the two adults, we had to just rely on our “skill”. Out of bounds would be a one stroke penalty, and balls up against the wall could be moved a club head length away for a proper swing. Course rules have a six stroke maximum per hole. With the rules agreed upon, we approached hole 1. Each hole has a scroll next to it to explain the theme and give some hints about how to play the hole. Time to show off our skills. Our daughter was first up, and she promptly took a swing and missed. My husband took his swing and chipped it out of the marked area and into the bushes. I hit the ball hard enough into the wall that it bounced back at me and rolled back towards the chalet. Yes, this was a fine start. We all agreed that those were our one practice swing, and then tried again. This time we all got the balls close to the ramp, and a second shot got them into decent hole position. Some of the holes were pretty challenging for all ages, but each of us did fairly well. Like any good mini golf course, some holes had special effects to add to the fun. For example, on hole 3, if you hit your ball underneath the cooler…. …it opened up to reveal some goodies. Part of our motivation to get out but away from people was trying to hide from the upcoming election, so when we saw this at hole 4, I almost cringed when I saw this bumper sticker–then again, who wouldn’t want Santa for the highest office in the land? By far, hole 6 was the toughest of the course for us. In theory, it was simple — hit the ball in the opening in the sled, and then it rolled down to the level with the hole. Six strokes later each, neither my husband or I had managed to get it to go through the opening, and the slope meant that it rolled back to us every single time. On the other hand, our daughter did manage to get it into the hole, but in six strokes for her as well. Although this is a Disney golf course, and there are Disney touches all over, it isn’t quite as in-your-face as you might expect. That said, every good mini golf course has to have the traditional castle with a drawbridge hole, right? And having Mickey, Minnie, and Pluto snow sculptures on the course are a nice touch, too. Perhaps our favorite hole was 13, the “Squirty the Snowman” hole. I’m sure you can guess what happens when you go to retrieve your ball from there! One real crowd pleaser is #14: The North Hole. It’s a fairly simple hole to complete, but the fun is the pole in the center… …which carries the ball to the top before dropping it almost directly into the hole.

You’ll know that you’re nearing the end of the course when you go to some “inside the house” holes that are under cover. The last hole of the course is a “gimmie” hole in one that takes the ball and drops it in the ball return. All you have to do is hit it up a very easy ramp under the computer, and it goes into the ball return. I got it in for a hole in one (my third of the day). Our daughter got it in for a hole in one (her second of the day). And my husband…well, let’s just say he didn’t make par on this par 1 hole and leave it at that. (Although he had made two other holes in one earlier in the course, so it all evens out.) As life can get busy, it’s important to remember what’s really important–and spending time with family is high on our list. As we were walking back to the car, our daughter said that this may just have been one of her favorite best weeks ever, and she is already planning her technique for our next trip to try the Sand Course. Until next time, be kind to each other as you have your own best week ever!