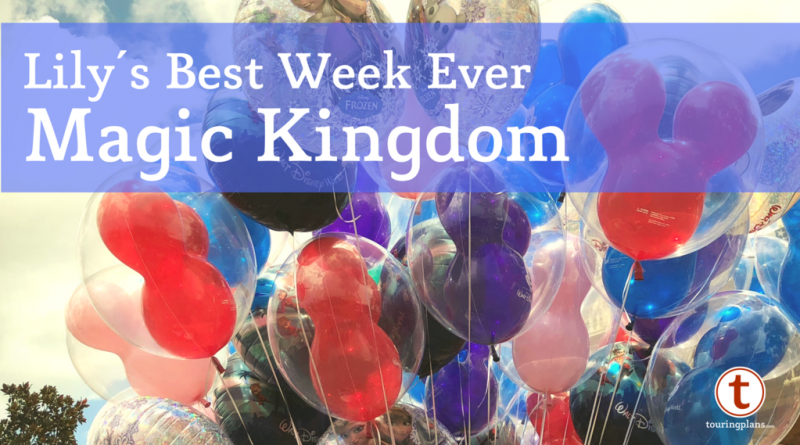 Hi everyone. It’s Lily again. Thank you all for reading my article last week and saying nice things. Today, I am going to Magic Kingdom. You can pick two ways to get to the Magic Kingdom after you park your car (or three, if the bus is running). You can use the monorail or the ferry boat. We took the ferry boat because there was a long line for the monorail. The ferry boat dock is next to the Polynesian. The buildings on the water are the bungalows. I would not want to stay there because it is too close to the boat. The train station is one of the first things you see when you take the boat to the boat dock. Some people might think it is the castle if they have never been to Walt Disney World before, but it’s not the castle. It’s the station for the train that runs throughout the Magic Kingdom. We started by walking on Main Street, but it was pretty crowded. (But not as crowded as some of the lines for the rides!) There is a little alley people might know as Flower Alley off to the side on Main Street. My mom said when she was a kid, it was filled with flowers. I saw Walt Disney World’s 15th Anniversary on YouTube and they showed Flower Alley with lots of flowers. This is the trolley for the welcome show after the park first opens for the day. The people riding it sing and dance once it stops. (It has to stop first because they are told “Please keep your hands, arms, feet, and legs in the trolley at all times. And supervise the other singers and dancers.”) There are so many coins in the water of it’s a small world. If you collected them all, you’d be rich! This is my favorite room in it’s a small world–it has butterflies hanging from the ceiling. It’s a tropical room about countries near the Pacific Ocean, plus it has a kangaroo from Australia. We saw Frozone walking by when we were in the line for the PeopleMover. I took this photo for Derek Burgan because he hates portrait photos. The Peoplemover is my other favorite ride. I like it because it’s a comfort food that’s not actually a food. When you walk around Tomorrowland, you see a black ball like this one. You can sometimes spin it (sometimes it’s down), and it is wet to cool your hands. Speaking of cooling off, this is a spaceship that has misters on the bottom of it, and cools you off when you walk through. Lots of people like to walk through. If you’ve been to Epcot, you might also see a car wash that does the exact same thing. This is a picture of a broken-down car on the Speedway. One night when it was raining, I went on the Speedway, and we had a car that was going crazy from side to side. Next, we went to PhilharMagic, which is a 3D movie like It’s Tough to Be a Bug, but not as scary. We had a FastPass+ that let us go through a different hallway, and we saw different posters then the other room. After that, it was getting hot so we got ready to leave. I took this picture over near Rapunzel’s tower because I thought it was neat. This is the garden in the hub near Main Street. I like this photo because it has the fountain, which I think is pretty. I have a quest for you! Try and find this in Magic Kingdom. You can put your guesses in the comments!

That’s it for this week. I’ll be back with more next week! See you real soon!