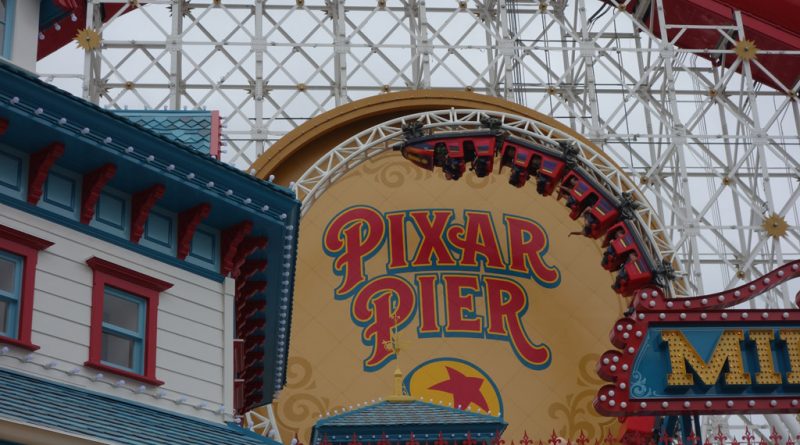 Pixar Pier is now open at Disney California Adventure in Disneyland Resort. In this post I’ll walk you through the new(ish) land, talk about what’s changed from its previous incarnation (Paradise Pier), and share my thoughts.

The former Paradise Pier is now split into two separate lands that still surround the same body of water, known as Paradise Bay. The area of Paradise Pier that ran along the southern and eastern borders of Paradise Bay has been renamed to Pixar Pier. At the moment, the land doesn’t feature any new rides, but California Screamin’ and Mickey’s Fun Wheel have been rethemed to Incredicoaster (a roller coaster based on the Incredibles franchise) and Pixar Pal-A-Round. At some point next year, two more attractions will open: Jessie’s Critter Carousel (formerly King Triton’s Carousel), and an Inside Out-themed midway ride named Inside Out Emotional Whirlwind (which will be Flik’s Flyers relocated from the soon-to-close, “a bugs land”). Shops, restaurants, and boardwalk games have also been rethemed to match the new land. Near The Little Mermaid ~ Ariel’s Undersea Adventure and Pacific Wharf is the main entrance to Pixar Pier. Guests walk under an archway with the Pixar Pier logo. Disney has confirmed that later this year the “Pixar Lamp” will be added to this archway. As you walk up the path, on the right you’ll see the only table service restaurant in the land, Lamplight Lounge, which I will go over in an upcoming post. For now, here are some pictures of Lamplight’s food that we shared on our Twitter page: On the left is Knick’s Knacks gift shop. I’m not sure what kind of look they were going for with Knick’s Knacks, but it looks like a cross between a hotel gift shop and a front desk of an office building. On the plus side, some nice concept art from Pixar’s films line the walls. The shop sells the usual assortment of shirts, plush, toys, and art. Next door is Adorable Snowman Frosted Treats, which sells soft-serve. Adorable Snowman’s signature flavor is lemon soft-serve, which is delicious and refreshing. The Pixar Pier Frosty Parfait (a Lemon Soft-serve with Blue Raspberry Swirl) is easily in my top 10 Disneyland Resort treats. Continuing up the boardwalk and into Pixar Pier you’ll enter one of four “neighborhoods” that make up the land, with the first being Incredibles Park. Like California Screamin’ before it, Incredicoaster dominates the skyline. The coaster itself has the same layout and thrills as before, but now a story line has been introduced. Disney’s description:

Back in the town of Metroville… the local townspeople are dedicating their beloved roller coaster to the Incredibles as a symbol of gratitude for all their heroic efforts. Our honorees are thrilled to attend the inaugural “Incredicoaster” launch, accompanied by iconic super-suit designer Edna Mode, who’s graciously agreed to watch Jack-Jack. But things go awry when the unpredictable baby escapes from Edna’s not-so-watchful eye.

Jack-Jack manifests various superpowers while teleporting from tunnel to tunnel, causing chaos along the way. His family sprints into action to save the day and, just when they think they’ve got a handle on things, he disappears all over again!

Join the Incredibles in their mad dash to catch baby Jack-Jack as he wreaks havoc throughout every inch of this high-speed chase! Here’s a few pics from Incredicoaster. What do you think? #PixaPier pic.twitter.com/b9rbzZN7mv

The new story line is fine. Static figures of the Incredibles family have been added along the track, as well as some neat lighting effects, and a new soundtrack. None of these additions add or subtract from what was already a very good roller coaster, so if you were a fan before then you still will be now. I have the mention the queue area of Incredicoaster. It’s been redone and given a new sleek mid-century modern look that is a big upgrade over the previous version of the queue. At one point in the queue, a video plays where Violet has a particularly funny quote: “Sure, slap our names on an old ride.” Edna responds with “Quite normal, darling. Corporations call it synergy.” Moving on to the next area of the Pier, you will find Toy Story Boardwalk, home of the interactive dark ride Toy Story Midway Mania. Nothing has changed inside the ride, but the building’s roof sports a nice new blue paint job. Two food kiosks are also in this area: Poultry Palace, which serves fried chicken in nicely themed to-go boxes, and Senor Buzz Churros.  I enjoyed the chicken (and especially appreciated the nice to-go box) from Poultry Palace. But $10 for three drumsticks is way too much money. Next to Toy Story Boardwalk is Pixar Promenade. This neighborhood is home to Pixar Pal-A-Round. The gondolas on the ferris wheel are now adorned with Pixar characters, and they look great. If you’ve never experienced Mickey’s Fun Wheel before, we recommend giving it a try thanks to its spectacular views of the park. Just avoid the swinging side if you are easily made sick by rocking motion. The best part about Pixar Promenade is the boardwalk games themed to various Pixar films and shorts. They feature some nicely done artwork, and have excellent prizes that are appropriately themed. Keep in mind that the games are an additional charge, $5 per a play. I especially liked the cute prizes for the La Luna game. A food cart, Angry Dogs, sells the appropriately named Angry Dog, which is a Spicy All Beef Hot Dog for $7.99. A small water feature is located in Pixar Promenade. A granite ball that looks like the Pixar Ball rotates with help from a water fountain underneath. The fourth and final neighborhood is Inside Out Headquarters, which is incomplete as of this time. It will be home to the previously mentioned Inside Out ride and a candy store called Bing Bong’s Sweet Stuff Confectionery. A canopy with various Pixar characters. I’ll wrap this post up with some light criticism. I was never much of a fan of Paradise Pier. Personally, a land themed to a theme park, inside of a theme park, doesn’t do much for me. Pixar Pier doesn’t change that. The land is pretty much the same, except now it has a layer of Pixar paint on top of what was there.  I’ve seen many hardcore Disney fans/apologists brush off any criticism because Pixar Pier is meant to be “for families.” Almost like they’re saying the rest of DCA and Disneyland isn’t for families? I don’t understand the argument. Have you ever heard a family say that they hate Cars Land or Pirates of the Caribbean? Didn’t think so. Anyway, I’m equally as confused by the downright hatred the land has received from fans. Mostly because overall Pixar Pier isn’t worse than what was there before. I believe those tasked with designing and building Pixar Pier did the best they could with the budget and time they were given. There’s nothing downright hideous, Incredicoaster is still a great coaster, and the land still looks great at night. I will say this, Pixar movies are still special to me, and I think they are to most on the planet as well. I’m hoping at some point another Pixar movie gets an attraction that is similar to Radiator Springs Racers in terms of scope, scale, artistry, and fun.

What do you think about Pixar Pier? I’m especially interested to hear if the land made you more likely to book a trip this year to experience it. Let me know all your thoughts in the comments below.