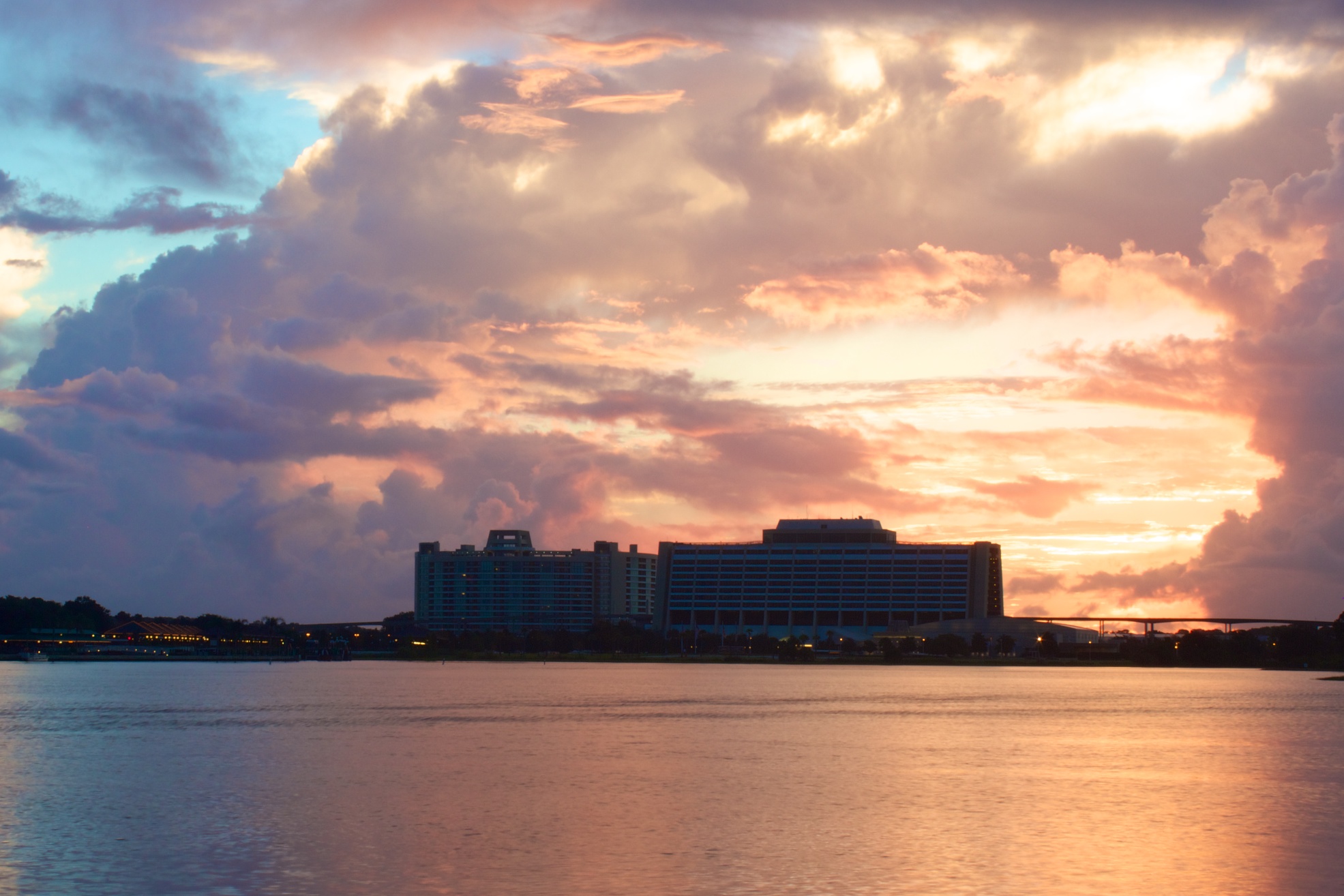 In 1971, the dawn of the Vacation Kingdom, Walt Disney World came to be. In the beginning Walt Disney World wasn’t about theme parks, it was a sprawling vacation getaway with multiple ways to relax and reconnect. Now that Walt Disney World has grown to encompass four distinct theme parks, two water parks, mini golf, PGA golf courses, and over 20 resort hotels, it can sometimes feel like the is no room for relaxation. But, if you look for it, you can still find the Vacation Kingdom’s message of leisure, and one of the best places to find it is the Bay Lake area.

A brief history of Bay Lake

The strategic development of what was once marsh land to create Walt Disney World is pretty fascinating. It is a smart business move that sometimes happens today: company names created to purchase the land without the attractive, financial appeal of the Disney Corporation, and thus a price increase. Then there’s the creation of a self-governing city: Bay Lake. Many steps were taken to make Walt Disney World incredibly unique and free from much of the normal regulation other enterprises have to face.

Lay of the lake

The main destinations within the Bay Lake Area are some of Disney’s most iconic resorts. Disney’s Contemporary, Polynesian Village, Grand Floridian, and Wilderness Lodge resorts each have their own distinct character and appeal. Visiting these resorts is enough to make for a nice afternoon, but the activities that can be enjoyed throughout this resort area can make for a full day of recreation. Disney’s Contemporary, Polynesian Village, and Grand Floridian Resorts rise along the shores of the Seven Sea Lagoon, the bustling yet calming body of water that acts as the gateway to the Magic Kingdom. This man-made lagoon is connected to the bigger, more tranquil Bay Lake. Here it is calm. Here it is near peaceful. The majestic, masculine Wilderness Lodge stands watch as the rustic, outdoorsy charm of Fort Wilderness Campground neighbors nearby.

One of the most common, well known ways to enjoy the Bay Lake and Seven Seas Lagoon area is to enjoy a monorail tour (or monorail crawl) of the resorts. During slow season you can generally park at Disney’s Polynesian or Grand Floridian resorts and begin your tour here. However, there is buzz about Disney leadership implementing a charge for parking for those not staying at the hotel.

It is relaxing and transformative simply walking around each of the three resorts. Soak up the tropical, aloha spirit of the Polynesian by walking along the pathways that wind all through the entire resort. Head into the Great Ceremonial House and grab some quick, but fresh sushi at Kona Island Café or a Dole Whip at Pineapple Lanai, and relax in the lobby for a few minutes.

When at Disney’s Grand Floridian, savor the elegance of this flagship resort. The Victorian era charm is refined, I always find my posture has improved the minute I set foot in this resort. This is the Vacation Kingdom after all, so come as you are, all are welcomed. Grand Floridian’s lobby is unique in many ways. For one, there are multiple retail shops here, not just the standard Disney merchandise shop. Second, a live pianist plays classic standards and Disney melodies in the early evenings. Third, in the later evening a fabulous live band serenades from the second level bandstand.

After you’ve taken in the lobby head outside to stroll through the pathways. I recommend heading to the left and follow the pathway towards Narcoossee’s, to the water’s edge where you can catch a lovely, romantic view of Cinderella Castle.

As you hop on board the monorail get ready for a breathtaking view of the Bay Lake area and much of Walt Disney World property as the monorail track reaches its highest point. Enjoy the hustle, bustle, and pixie dust of the Magic Kingdom without getting into the thick of it, as the monorail stops at the entrance. Finally, Disney’s Contemporary Resort awaits as the gateway from Seven Seas Lagoon to Bay Lake. There is not as much to explore here, but there are some sights worth seeing, especially the Grand Canyon Concourse mural by Disney Legend Mary Blair. And of course simply gazing at the monorail as it whizzes by in the middle of the concourse brings out the kid in all of us.

Many people are quick to highlight the observation deck that overlooks the Magic Kingdom, and yes, you should certainly take a moment to step outside and check out the view. But, don’t miss out on the panoramic view of Bay Lake from the windows of the concourse. After just a few moments you’ll be ready for the best way to enjoy the Bay Lake area: by boat. Get out on the water

The best way to enjoy Bay Lake and Seven Seas Lagoon is by boat. Nothing beats being on the open water with the beauty of Walt Disney World all around. There are multiple marinas in the area at which you can rent a vessel, either a two passenger SeaRacer or a two different larger boats. A Boston Whaler® Montauk boats fit up to 6 Guests is a better choice for boaters with some experience. A Sun Tracker® pontoon boats fit up to 10 Guests and is a great choice for enjoying a more laid back, leisure cruise, and not a lot of boating experience, like none at all really, is necessary.

Disney’s Grand Floridian, Polynesian, Contemporary, Wilderness Lodge, and Fort Wilderness each have their own marinas with the same boat selection (though number of vessels does vary). I recommend going to either Contemporary or Wilderness Lodge or Fort Wilderness because your starting and ending point will be Bay Lake, which is has slightly less boat traffic and typically makes for an easier start and ending. Rates are by the half hour, about $30 for 30 minutes with the SeaRacers and about $45 for 30 minutes for a pontoon or Boston Whaler®. You can rent for longer than 30 minutes, though I think an hour is really the longest it makes sense to rent for. Once you’re out, floating on the Disney waterways make sure you see the following sights. Nestled in the waters of Bay Lake rests the all but abandoned Discovery Island. It is quite mesmerizing to see such a wild, unruly landscape of what is essentially Disney’s precursor to Animal Kingdom. The animals you see aren’t necessarily left behind, but rather local wildlife that moved in after Disney moved out.

Further back, towards Fort Wilderness Campground, along the untrimmed banks a keen eye will spy one of my favorite childhood haunts: River Country. While it still pains me that this original water park is uninhabitable, it really didn’t make much sense to keep it open once Typhoon Lagoon and Blizzard Beach arrived on the scene. Whether you were lucky enough to splash around this wonderful watering hole during its heyday or not, it is pretty cool to see water park infrastructure left to the devices of the elements.

As you head from Bay Lake over to the busier waters of the Seven Seas Lagoon be sure to observe the engineering feat of the water bridge that connects Bay Lake to the Lagoon, and allows vehicle traffic to pass underneath. Once you’ve reached the Lagoon I highly recommend voyaging toward the Magic Kingdom, keeping an eye out for larger vessels. You can pull the boat up pretty close to the ferry boat dock and bask in the beauty of Magic Kingdom’s entrance and Cinderella Castle. It is quite a unique experience to enjoy such a view while bobbing along on the water.

The Bay Lake and Seven Seas Lagoon are full of ways to kick back and enjoy the Vacation Kingdom era. Going on vacation should be a source of rejuvenation. Make sure you take some time to actually relax and not just rush from thing to thing. After all, that’s really the reason Walt Disney World, the Vacation Kingdom, was created.

10 thoughts on “The most relaxing place inside Walt Disney World”