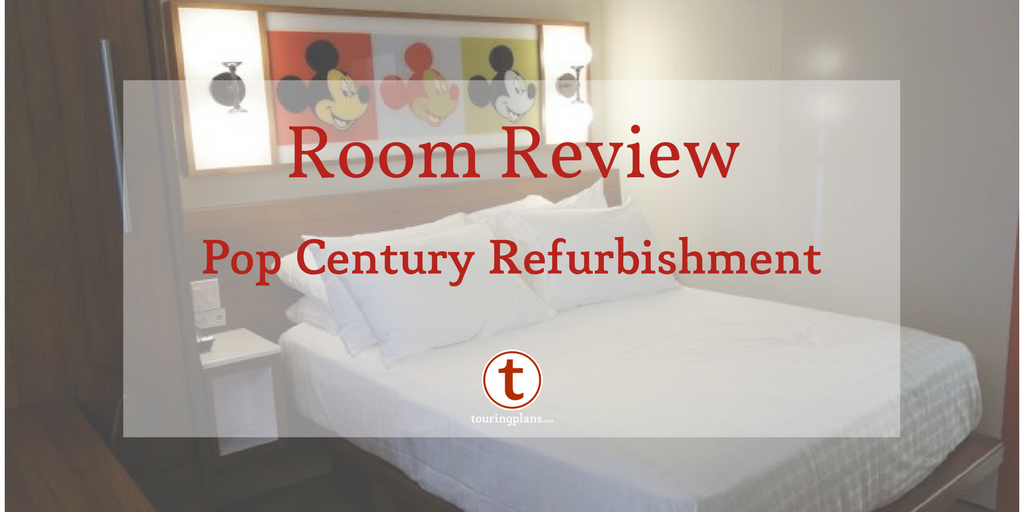 The rooms at Disney’s Pop Century Resort have received their first major update since opening in late 2003. While the resort’s colorful exteriors and icons (such as Roger Rabbit, jars of Play-Doh, and Rubik’s Cubes) remain unchanged, the rooms have been redesigned from top to bottom. Here’s our review of refurbished rooms at Disney’s Pop Century Resort. When I first walked in to one of the refurbished rooms at Pop Century, I thought “Where do I even begin?” Everything has been changed, even the floor. Gone is the carpet with Mickey heads. Rooms now feature hardwood floors. I found the room to have much more echo because of this. But overall I think this is a big improvement in terms of looks. The down side is that dirt, hair, and other debris you’ve tracked in is now much more more noticeable. Pop’s beds have been upgraded from double to queen size, which is great. I found the bed to be very comfortable, and a bit on the soft side. The themed bedspreads were removed a couple of years ago in favor of the all white sheets seen above. The poster featuring Disney items from different decades has also been removed. The only art you’ll find in the room is the pop art Mickey above the bed, and Pluto above the second bed. Beneath the bed you’ll find open space that is tall enough to fit most bags and suitcases. On the bed you’ll find EIGHT pillows. Why? Because… The second bed can be folded up when not in use. This makes the room feel much larger than it actually is, so there’s plenty of room for activities. A table with two chairs is provided, but is built in to the side of the bed’s cabinet. If you have the bed folded down then you cannot use the table as it is not detachable.

Ed. – The model rooms we saw in 2016 showed the bed with a coverlet at its foot. As you can see, it brightens up the room considerably. I would guess these either aren’t ready yet or Disney is waiting until more rooms are finished before adding them. For reference, this is what the rooms at Pop Century used to look like. The dresser is slightly bigger than before and also features a more modern look than its predecessor. The safe has been moved from the closet area to the left side of the dresser. Above it you’ll find a HDTV. I didn’t measure it, but I’m guessing it’s about 40 inches. In the corner you’ll find a cabinet containing a mini fridge, coffee maker, cups, and ice cube holder. The mini fridge has a glass front so you can see how many days of leftovers are rotting away in there. Looking back at the room you can see how much larger it feels with the second bed stowed away. Also notice the curtains now have a… I don’t know… modern art/Ikea look to them. Whatever you call them, it’s an upgrade over the plaid curtains previously seen at Pop. Moving on to the dressing room/closet area. One of our main gripes about the previous dressing rooms at Pop was the lack of counter space. Thankfully this has been addressed with the addition of several shelves. The lighting has also been updated from lamps on the wall to light strips surrounding the mirror. A hairdryer and iron are still included. A sliding door separates the dressing room area from the rest of the room, replacing the curtain found in the rooms pre-refurbishment. The closet space has been severely downsized in favor of the additional shelving mentioned previously. The bathroom also has a sliding door, which is good if one person wants to shower while another uses the dressing room and sink. Also new is a glass shower door, which replaces a themed shower curtain. The entire bathroom and dressing room areas are much better, in all aspects, over the previous version seen above.

One of the new Pop Century rooms in the 90s and 80s buildings. What do you think? pic.twitter.com/zQWXtURC6N

In my opinion the new rooms at Pop Century are a massive upgrade over the old rooms. But reaction from our readers has been mixed. Take a look at some of the comments to the tweet we made during our stay. One reader called it “sterile,” another said “WDW is going ‘Marriott’ with their once great room themeing.” A common complaint is the theme, or lack there of. I personally do not find this to be a problem, but a lot of people obviously do. Also, after seeing these modernized rooms, and knowing that Pop Century will soon be home to a station for Walt Disney World’s upcoming Skyliner transportation system, I’m curious about how much of a “value” this value resort will remain. No matter what happens, the new rooms look great, and are functionally better. Let me know what you think in the comments below.

If you’d like to stay in one of Pop Century’s refurbished rooms, you can use our room request system to ask for one directly from Disney (See this post for more information). Disney has finished refurbishing the 80s and 90s buildings. Work on the 70s buildings is in progress, and more will be completed over the next year.