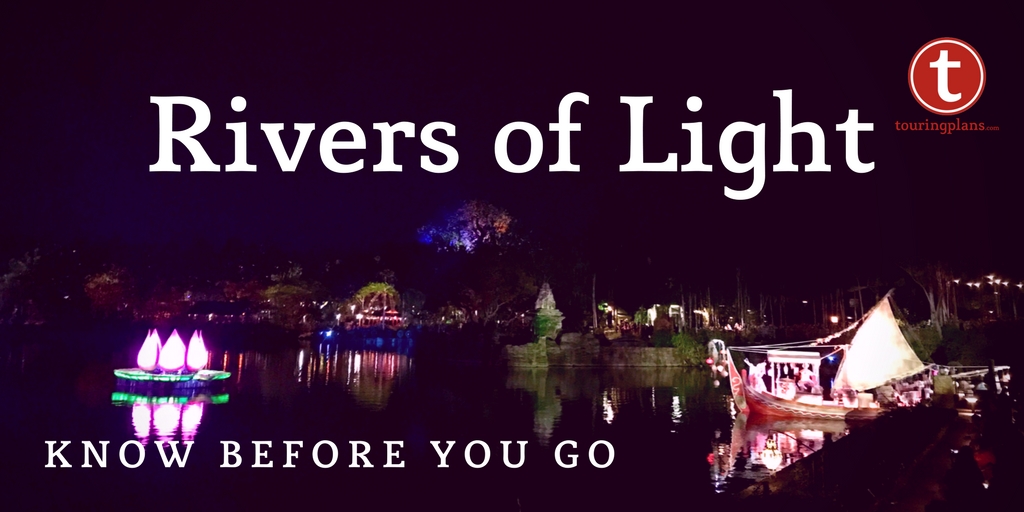 It’s finally here. After months of delays and a long hype campaign, Rivers of Light has made its debut at Disney’s Animal Kingdom. Once upon a time, having Animal Kingdom open at night, let alone its own night time show, was just a dream. The fact that it is finally a reality is enough to make me happy. Personally, I found the show to fit the spirit of Animal Kingdom very well and think it is a nice addition to this Walt Disney World theme park that always seems to be fighting an uphill battle. On your next visit to Disney’s Animal Kingdom you should definitely make time to see this new night time show. Rivers of Light is worth seeing at least once, and here’s what you need to know before you go.

There will be lines

(regardless of if you have a FastPass+ or not)

If you have either a FastPass+ or dining package you are guaranteed a seat up until about 5-10 minutes before show time.  The advantage of both of these options is to not have to get to the theater 45 minutes before showtime just to get a seat of any kind. Both methods save you time.

In my opinion it was worth having the FastPass+ when I viewed Rivers of Light. It reduces the stress and worry of wondering if you’re even going to get into the theater, plus the standby line is quite long. So while FastPass+ and dining package guests are seated in the theater, hundreds of standby guests wait standing in a long, winding line. Additionally, on most nights there is only one performance. However, on peak nights there are two shows. The second show does fill up, though not as quickly as the first show. Before you enter the theater…

Whether you are using a FastPass+ or standby, once you are in the theater it is a little cumbersome to get up and either get snacks or use the restroom. It is do-able; Cast Members at the theater entrance will give you a lanyard to wear to allow you to exit the theater and come back in. However, the rows are fairly long without much space in between making it difficult to get back to your seat.

Restrooms are located to the left of Expedition Everest, a bit of a walk from the Asian entrance to the theater and also near the Finding Nemo Musical Theater.  I recommend you visit the restroom before entering the theater. Having a snack or drink while in the theater helps make the time go a little faster and more comfortably. You can bring food and drink into the theater; I visited the Thirsty River Bar near Expedition Everest and enjoyed sipping on some red wine while waiting for the show. This won’t always be the case, otherwise the show would be considered a disaster, but for the next few weeks it is safe to say that the show may start later than expected. The majority of the showtimes of Rivers of Light thus far have started 5-15 minutes later than the published show time. There are quite a few technical elements in the show, which opens up more opportunities for “whoopsies” (that’s a technical term, I promise).

When I went to see the show on opening weekend I noticed the lotus flower floats moving into place about an hour and a half before show time, and operations Cast Members were getting the theater ready. However, the largest lotus flower float did not come out into the lagoon until just after the published start time and had to get into place before the show could start. I am not sure if this particular float was the only reason for the delay. Hopefully very soon we will have a complete and delay-free Rivers of Light on a regular basis. The ampitheater isn’t the only place you can see Rivers of Light. There are a few other places to view the show around the lagoon. However, there is nothing like World Showcase Lagoon at Epcot where you can easily walk up and find a spot on an average day and have a decent view. Rivers of Light plays to the theater, it has a forward facing direction. If you are not in the theater you’ll still be able to see the show, but the music and effects are not directed at you. The quality of the sound and effects will be diminished if you are not in the theater.

A few alternatives to the theater are the bridge between Expedition Everest and DinoLand, the bridge from Discovery Island to DinoLand, and along the walkway between Yaki and Yeti Restaurant and Expedition Everest. You’ll still need to be in these areas well before show time, and the walkways are subject to being kept clear by Cast Members. The waterside seating at Flame Tree BBQ is only an option when this counter service location is open during show time, which is rare. Last, but not least, the most important thing to do during Rivers of Light is to take in the view. Not only is the show full of beautiful imagery and colors, Disney’s Animal Kingdom is beautiful at night. It is calm, yet vibrant. Don’t get too wrapped up in waiting for a wow moment that you expect in a fireworks show. Don’t expect a story line or plot.

Instead, sit back and observe the movement, the patterns, the fountains, lasers, projections, and colors. Take in the whole view. There isn’t really a bad view in the theater because the show moves around quite a bit. Everyone gets a chance to see it all.

I feel the show’s beauty, creativity, visual elements, and music are enough to make it worthy of your time. It certainly is a pleasant way to end your day at Animal Kingdom, and I think it is enough to keep guests in Animal Kingdom longer, especially once Pandora: World of Avatar opens in May 2017.

Rivers of Light is closest to World of Color at Disney’s California Adventure and IllumiNations at Epcot in the family tree of Disney night time shows. If you can appreciate subtlety, artistic expression, and quiet moments, such as the middle portion of IllumiNations then you will probably enjoy this show. If instead you find yourself bored and fidgety during such moments, then Rivers of Light is probably a hard sell for you, and that’s okay.

After all, the main message of Rivers of Light is that the diversity of our planet is beautiful and spectacular. Without different tastes and viewpoints our world wouldn’t be what it is. And it is messages like this that make me appreciate Rivers of Light and make me want to see it again.

Hard not to get goosebumps during the opening of #RiversofLight pic.twitter.com/bgUbLV5sx2