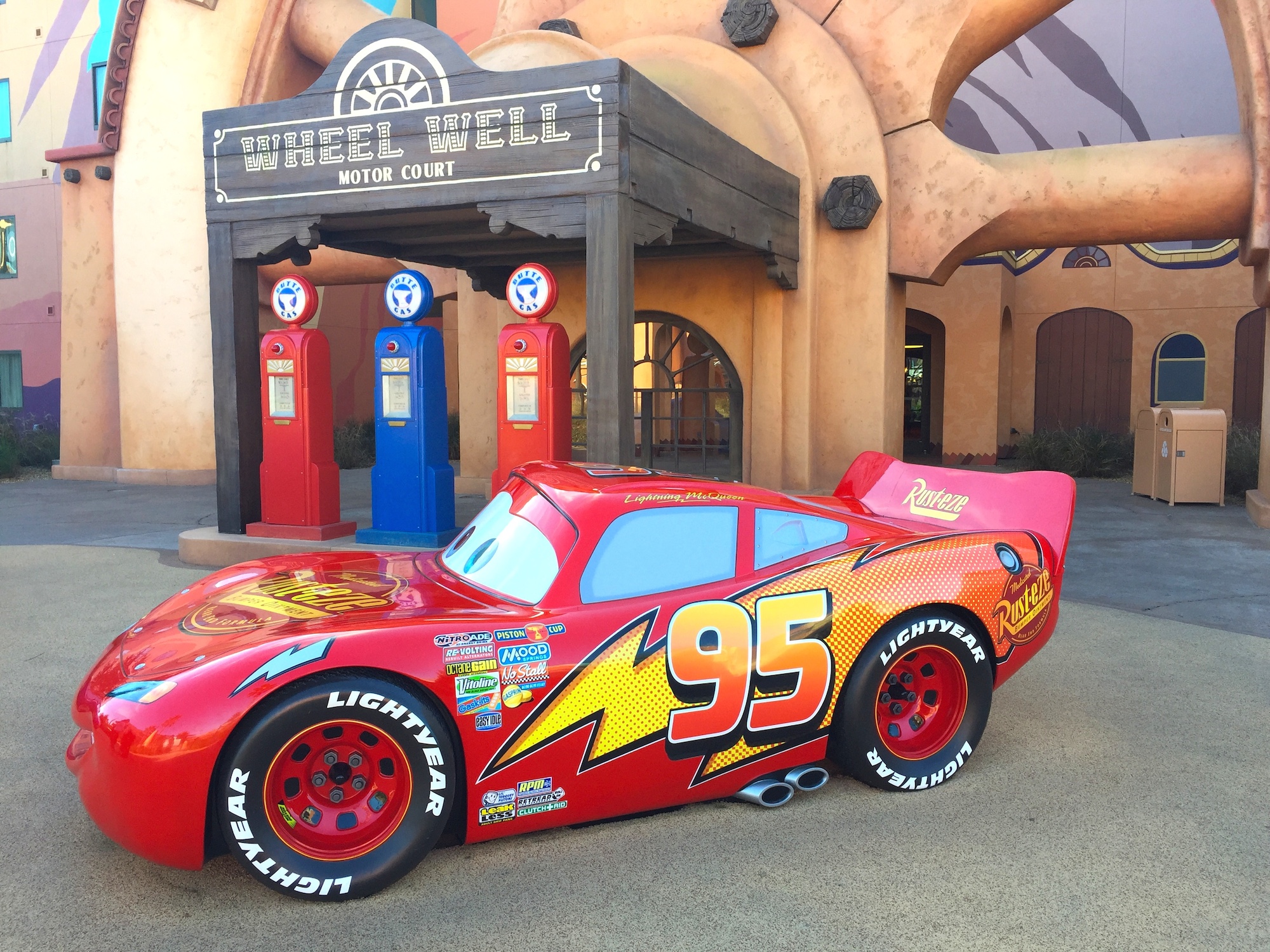 This week’s SATURDAY SIX takes a look at 6 Amazing CARS Details at Disney’s Art of Animation Resort!  This weekend the third installment of the Cars franchise hits the theaters and we thought of no better time to head into one of our favorite resorts on property, Disney’s Art of Animation Resort. The original Cars is one of our favorite Pixar films and is right up there with Ratatouille, Up, and The Incredibles. When Disney California Adventure opened up Cars Land, we were more than a bit jealous, but one thing we did get in Florida is the incredible Cars wing at AOA. The rooms, the buildings, and even the hotel’s lobby is filled with great details, many of which might go unnoticed by the average guest. Today we’re going to take a look at some of our favorite details, and let’s kickoff the countdown with…

# 6 – Pixar Autographs on Cars Storyboards in the Chandelier

The lobby of Disney’s Art of Animation Resort is one of the most unique on property, and is a downright must see for animation fans. The highlight of the entire area is the stunning Storyboard Chandelier. The star burst-like chandelier is made up of hand drawn storyboards from the four films that make up the sections of AOA (The Little Mermaid,  The Lion King, Finding Nemo, and Cars.) If you look closely at some of the storyboards, you’ll see that several of them are signed by people involved in the films.  For example, Jodie Benson and Pat Carroll – the voice actresses for Ariel and Ursula in The Little Mermaid – both have autographed storyboards featuring their characters from the film.

For the Cars storyboards, some of the biggest names from Pixar can be found in the Chandelier. There is no name bigger than John Lasseter, the director of Cars and current Principal Creative Advisor for Walt Disney Imagineering. Lasseter has signed a storyboard featuring Lightning McQueen.

Jerome Ranft is a character sculptor for Pixar and brother of the late Joe Ranft (screenwriter with credits that include some of our favorite animated films including Toy Story, Beauty and the Beast, and The Lion King) and Jerome signed a drawing featuring Mater cow tipping. Jerome and Joe also worked on some of the larger than life sculptures we see in the Big Blue Pool area in the Finding Nemo section of AOA.

Artist Josh Cooley worked on Cars and even hand colored the storyboard that he autographed back when they original had it made for the film. The storyboard features Lightning McQueen chasing down Chick Hicks and The King.

Robert Baird, the writer behind Big Hero 6 and Monsters University has autographed a storyboard featuring an angry Chick Hicks bound and determined not to finish behind The King again.

Jay Ward, the actual Cars Legacy Guardian, has his John Hancock on a storyboard featuring the moment where Snotrod wakes up the tired Mac.

While we are still in the AOA lobby, let’s check out some of the artwork on the wall facing the check-in desk. Starting from when you entir the lobby, the drawings progress from the earliest concepts of the film all the way to the end with the characters that we know and love. For Cars, one of these drawings include Lightning McQueen with the number 57. While we know Lightning with the number 95 today (a number that references 1995, the year the original Toy Story film was released,) during the development of Cars McQueen;s 57 was referencing 1957, the year John Lasseter was born.

Now we’ll head over to the actual Cars wing of AOA, and everyone who has been there knows what a great job Disney did in recreating a small scale version of Radiator Springs. One thing many guests like doing at all of the Disney hotels is finding the “Hidden Mickeys” around the resort. AOA has Hidden Mickeys in all four wings of the resort, including Cars, but one thing it also has is… Hidden Cars. The buildings all have cloud formations at the top of them, but if you look closely a couple of those clouds are actually in the shape of cars driving around!

One awesome feature of the Cars section of AOA is that the actual townscars of Radiator Springs are out and about for photo ops. Doc Hudson, the Sheriff, Ramone, Flo, Mater, Sarge, Fillmore, Sally, and Lighting are all out for guests to take photos with. Each of the cars have details that you probably wouldn’t notice while watching the film, especially all the stickers for Lightning McQueen and Fillmore. Like NASCAR cars, McQueen has a bunch of ads on his cars featuring parodies of human products including Gasprin and Leak Less Adult Drip Pans. Fillmore is covered in bumper stickers with clever takes on being pro-recycling and for the environment. Fillmore also has a registration like-sticker that mentions “Luxo.” Luxo is the official mascot of Pixar and is that little lamp you see jumping across the screen at the start of every Pixar film.

Most of the actual cars in this area have license plates (McQueen being an exception) and some of them have some really cool references. Mater’s plate is A-113 and this is a reference that can be seen in many Pixar films because it is a call out to classroom A113 at the California Institute of Arts. This is where a class was held for graphic design and character animation, and many of its students have gone on to help make many of the animated classics – and live action films – that we treasure today (including John Lasseter, Brad Bird, Andrew Stanton, Tim Burton, and John Musker.)

Fillmore’s license plate is the birthday of George Carlin, the comedian who voiced the character. Carlin passed away in 2008, two years after the first Cars film.

Luigi’s plate is an interesting one. With 44.5-10.8 it has the quick joke that it appears to be based on the metric system, which makes sense since Luigi is clearly Italian. However, it appears the reference goes even deeper than that, with the numbers actually referring to the GPS coordinates for a Ferrari manufacturing plant in Maranello, Italy. That is next level bananas. Incredible!

While Flo’s SHO GIRL vanity plate is all that noteworthy, the Motorama 1957 above it is. As we mentioned earlier, the 1957 refers to John Lasseter’s birth year, and the Motorama refers to a completely bonkers car show that takes place every two years on the campus of Pixar. This is one show I need to see one day.

As a Cars fan, one of my favorite parts of the movie is when Lightning surprises Sally by showing her all the neon in Radiator Springs lighting up at night. It’s a truly special moment in the film and Cars Land in California recreates it nicely as well. While the entire Cars section at AOA isn’t filled with a bunch of Neon, the area does have several pieces of neon along with other lighting features that really make the area pop at night. Disney has a lot of great resorts, but few of them have such a transformation when the sun goes down like the Cars wing. After a long day at the theme parks, it’s nice to walk back to an area that is remarkably different looking than the one you left in the morning, and if you’ve only seen the Cars section during the day it’s worth a walk over at night to check out the area.

HONORABLE MENTION – All The Other Details

There are so many great references in the Cars area that we couldn’t possibly get to them all, but keep your eyes open and you’ll see some very funny jokes or things from the film brought to life.  It’s a terrific area and – for me – by far and away the best place to stay in at Art of Animation.

So there you have it: Six Amazing CARS Details at Disney’s Art of Animation Resort! See you next weekend for the latest installment of the SATURDAY SIX, where we’ll look at something fun from the world of Disney and Universal. If you enjoyed yourself, be sure to check out The Magic, The Memories, and Merch! articles, or, for your listening pleasure, check out the E-Ticket Report podcast. You can also follow Your Humble Author on Twitter (@derekburgan).

Special Thanks to crack staff photographer Brandon Glover, Dynamite Daisy Lauren, and blogger to the stars Megan Stump for their invaluable assistance with this article. Be sure to also check out Brandon on The Park Blogger podcast with goofballs co-hosts Aengus Mackenzie and LitemAndHyde , while fellow Potterheads may enjoy Meg’s work on the Central Florida Slug Club.