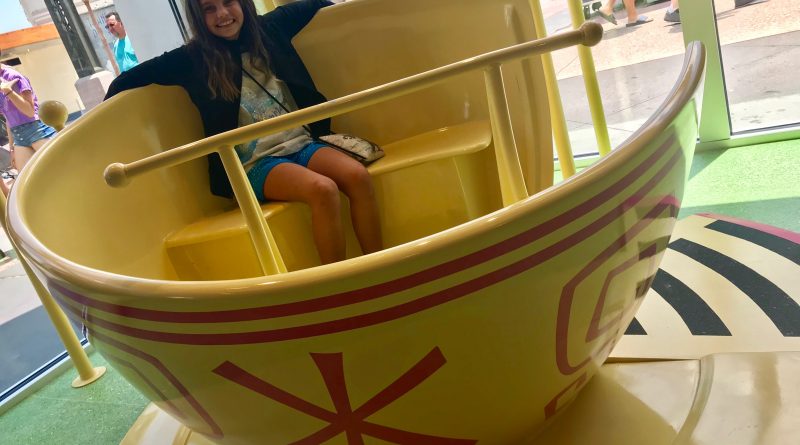 This week’s SATURDAY SIX takes a look at DISNEY SPRINGS! In the transition from Downtown Disney to Disney Springs, we’ve already covered some of the things we really enjoy, including the E-Ticket parking garages, Chef Art Smith’s Homecomin’ and the gigantic must-be-seen Baked Alaska at BOATHOUSE, but this week we’re going to look at some new additions to the area along with some under the radar experiences that you just have to do, so let’s kickoff the countdown with…

Amorette’s Pattiserie is one of the true “best kept secrets” at Walt Disney World. Many of us watch various cooking shows on TV with world class chefs making incredible desserts that are as much pieces of art as they are food. You can actually get these mouth watering treats at Disney Springs and at a reasonable cost. While best known for their Instagram-worthy petit cakes, Amorette’s offers a rather large menu. Cake pops, cheesecake, chocolate covered strawberries, eclairs, and their too-cute-for-words mousse are just some of the offerings for those who have a sweet tooth. Meanwhile you can also get a light lunch or dinner with a selection of sandwiches and made-to-order crepes. Celebrating a special occasion while on vacation? Consider surprising your loved ones with a large character cake that can be pre-ordered and then picked up at the store (call (407) 934-3500 or stop by Amorette’s at least 72 hours in advance.)

I have two places in Orlando that I like to see movies at. One is the true IMAX screen at Pointe Orlando on International Drive. The other is the AMC Dine-In Theatres at Disney Springs. With a shockingly good menu along with a full bar, this was how movies were meant to be enjoyed…with people bringing you stuff! Instead of the usual movie theater where there is literally nothing to do while waiting for your movie, the lobby of the Dine-In Theatres features the MacGuffins bar and lounge. Here you can enjoy drinks along with being able to order off the food menu. Inside the actual theater, guests are seated with a table in front of them and a call button for your server. There is no minimum purchase, and you can even just order popcorn and soda (or nothing if you so desire.)

With Cirque du Soleil currently dark along with DisneyQuest and Wolfgang Puck’s Grand Cafe in the process of being remodeled into new experiences, the West Side can oftentimes seem like No Man’s Land. Here at the SAT SIX we say Nay Nay! It is well worth your while to head on over to Splitsville for both a meal and some fun bowling. When most people think of “bowling alley food” you generally think the lowest quality food imaginable, but do you know that Splitsville is one of the highest-rated restaurants at Disney Springs? The menu is absolutely awesome, including some of the best pizza at WDW (granted, the lowest bar possible, but still.) Great burgers and even better sushi are the highlights of the menu, and be sure to leave room for dessert. You can also get all of the items on the menu delivered to your lane while you bowl. Now that’s a sport we can get behind!

One of the most recent additions to Disney Springs is the DisneyStyle shopping experience located where the old Harley-Davidson store used to be. Now, for some reason in both California and even the “new and improved” World of Disney at Disney Springs, The Mouse has actually been taking out as much “Disney” as possible, and unfathomably turning their stores into generic retail offerings that just happen to sell character merchandise. Thankfully DisneyStyle went the complete opposite direction and is a true pleasure to be in for any theme park fan. The store is filled with some unique Disney items along with some fantastic photo-ops! Be sure to keep your head on a swivel, as there are some wonderful design elements everywhere you look, from Tangled-inspired lanterns and an old school Skyway bucket hanging from the ceiling, to its a small world-like artwork in the dressing rooms. With fun props throughout the store that are going to appeal to the Disney parks fan, its also nice to know that DisneyStyle isn’t stocked with a bunch of generic “Disney Parks 2018” merchandise, and instead has a great selection of themed merchandise that can be irresistible.

Yes, Chef Art Smith’s Homecomin’ is one of our favorite restaurants in all of WDW. We thought after the debut of the thigh high chicken biscuits that it was IMPOSSIBLE for this dining venue to get better. Turns out we were wrong, as earlier this summer Homecomin’ started to serve a weekend brunch menu. Blueberry mimosas. White peach sangrias. House made mini-doughnuts. The Hallelujah biscuit. We are starting to see a resurgence in brunches at Disney, and Homecomin’ is a great place to start your Saturday or Sunday (10:00am – 2PM.)

# 1 – The Void: Star Wars Secrets of the Empire

I have not done much Virtual Reality gaming. In fact my first experience with VR was on a Legoland coaster (this is of course completely discounting all the horrible “VR” such as Aladdin’s Magic Carpet at DisneyQuest.) I thought VR was a neat gimmick. After doing The Void at Disney Springs, I’m 100% convinced VR is the future of the entertainment industry. After being outfitted with special helmet and back pack, you literally walk into another world. I could not believe what I was experiencing. Without much spoilers, as a rebel spy you are transported to the lava planet Mustafar and as God as my witness it feels like you are there. One of my favorite parts of the entire experience is that it doesn’t “dumb itself down” and all but makes you figure things out on your own during the journey. You also have the smart aleck droid K-2SO (from Rogue One) along the experience, giving suggestions and funny comments about your ability in the game (or lack thereof.) At several points you get to shoot at attacking Storm Troopers, and its everything the 10 year old me wanted and then some. A literal dream come true. After we finished, all I could think about was doing it again. The cost was $29.95 per person, and while the actual gameplay is only about 7-10 minutes long, it is worth every single penny.

I used to say that the Hoop-Dee-Doo Musical Revue was the one thing people had to experience at Disney if they hadn’t done it before. Now I’m telling people they have to do The Void, it’s that good.

For more info on Star Wars Secrets of the Empire, check out Erin Foster’s full review of The Void experience.

The greatest job in Florida, hands down.

, is the Sauce Slinger at Chicken Guy! The Slinger is loaded down with various flavors of dipping sauce for you to enjoy and adds a little fun to one of the most reasonably priced meals at Disney Springs. Be sure to check out TouringPlans’ review of Chicken Guy! including meeting the man steeped in legend… the Sauce Slinger.

So there you have it: Six Reasons We Love DISNEY SPRINGS! See you next weekend for the latest installment of the SATURDAY SIX, where we’ll look at something fun from the world of Disney and Universal. If you enjoyed yourself, be sure to check out The Magic, The Memories, and Merch! articles, or, for your listening pleasure, check out the E-Ticket Report podcast. You can also follow Your Humble Author on Twitter (@derekburgan).

Special Thanks to our spirit animal Brandon Glover, Captain Cruiseline @TheDCLBlog of the world famous Disney Cruise Line Blog, the bio-est of all reconstructs @bioreconstruct, Erin “Bananas” Foster, the SAT SIX Fun Squad of Parkscope Joe and Nick, crazy cat lady – and our Fearless Leader – Laurel Stewart, and blogger to the stars Megan Stump for their invaluable assistance with this article. The SAT SIX is inspired each week by goofballs Aengus Mackenzie and LitemAndHyde and you Potterheads will  enjoy Meg’s other blog work over at the Central Florida Slug Club.