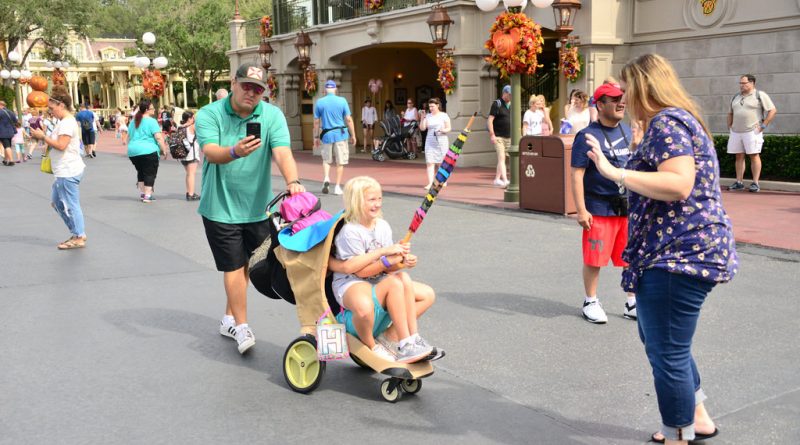 This week’s SATURDAY SIX takes a look at Guest Etiquette in the DISNEY PARKS! Regular readers of this fine blog series may remember our SAT SIX on Disney Pet Peeves. Turns out, there’s even more stuff that drives us crazy while at the theme parks and we’re back to air some grievances.

Mary Poppins once said that “a spoonful of sugar helps the medicine go down,” so to go over these theme park Dos and Don’ts we’re going to return to the classic “Goofus and Galiant” formula, using David and Derek. David is David Davies, a longtime TouringPlans analyst and IT strategist whose hobbies include solitaire, adult coloring books, and nitpicking. Derek is Your Humble Author. Together they will look at common guest behavior in the theme parks and examine how we all should – and more importantly, shouldn’t – behave.

One of the more controversial stories in the theme park world this past week included pictures of a monorail being towed to the station with several windows out. These photos included guests poking their heads out of these very same windows. Some assumed that it was just business as usual for our current monorails. We’ve already seen these vehicles drive with doors open and sometimes have parts falling off them, so it wouldn’t shock anyone if windows just started popping off by themselves. However, it turns out that the monorail had a loss of power, and guests were encouraged to “pop off” some of the windows to help circulate air.

In general, guest behavior on monorails could use some improvement. Oftentimes we have walked onto a monorail only to find that a previous guest had just left their trash on the seats. While there are not many official Monorail Rules, there are some common courtesies that will make the ride experience better for all, including:

A ride on the Disney monorail system can be one of the most special experiences in all of Walt Disney World, and we can all work to make it even more pleasant. Maybe I was not paying enough attention over the years, but lately it seems that a lot guests are finding as many ways as possible to “mark up” an attraction. We’ve all seen coins that have been tossed into any attraction which contains a water element, from its a small world to Flight of Passage. There are hair bands thrown at the top of Expedition Everest. There is even a “gum wall” at Splash Mountain. Pandora: The World of Avatar, which has barely been open for a year, has guests seemingly attempting to destroy everything they can get their hands on. Why? What causes people to deface art? Not just one person, but hundreds if not thousands of people. A general rule of thumb: if you’re over the age of 5 years old, you’re probably not supposed to be touching something and you’re certainly not allowed to be writing on it. Over the years even we at the SAT SIX have joked about the “please move forward and fill in all the available space” directions by Cast Members at various attractions. We hear it so much that at times it can become white noise. However, in general it does help the overall process in getting guests into an attraction, and nowhere is it more important than at shows (such as Indiana Jones Stunt Spectacular, Finding Nemo: The Musical and even the nighttime spectacular Fantasmic.) There is usually very little space to walk each row to begin with, and when a guest stops to sit wherever they want, it immediately becomes a challenge for everyone else to get by them. The good news is that – by and large – there’s not a bad seat in the house for theme park shows. Each venue offers different things to experience depending on where you sit. There is no “perfect” seat. We’ve all been next to “that guy” (or gal) who feels the need to talk during attractions. Sometimes its because they feel the need to show us that can recite the entire spiel in the Haunted Mansion stretching room. Apparently this type of person thinks they are the only one who has ever been on a ride like the Jungle Cruise and has heard the various puns/jokes and feels the need to say them out loud as well. (SPOILER ALERT: We all know the gags, we just let others enjoy the fun too.) Other times its guests having a loud conversation completely unrelated to the attraction. Either way, it’s annoying af. (That one’s for our Millennial readers.) I think we’ve all noticed that lines seem to be getting longer and longer, so the last thing most of us want after waiting 15 minutes to an hour in line is listening to someone take us completely out of the immersion. To quote Dr. Evil, “ZIP IT!” You haven’t lived until you’ve been in a theme park where a guest has laid out a plastic sheet and dolls to “hold their spot” for a parade or nighttime spectacular that is hours away from taking place. No one is saying you shouldn’t give yourself a little time and show up to an event 30-45 minutes early, but leaving something to hold your spot is obnoxious. It makes an already congested park that much harder to navigate. Holding spots for youngsters is perfectly acceptable, but holding the same spot for 4-5 adults? That’s just plain rude to everyone else. Arrive with your entire party and claim your spot. If nature calls and someone has to leave for a bit, that’s perfectly acceptable. Need to get a soda or popcorn? Go for it. Just don’t be gone for a half hour or more. We’re timing you. It never fails. If there is any sort of special event going on at Walt Disney World that includes an exclusive park map, the eBay pirates descend on it like locusts, often having maps listed for sale minutes after Disney started offering them to guests. Instead of every guest in the park being able to get this free souvenir, some are left out in the cold because others grab 10, 20, or more. Granted, more often than not Disney prints a ton of these maps. Enough to even satiate the unbridled thirst of the eBay pirates while having enough left over for the day guests. But not always, and that leads us back to the overarching theme of this entire article: BE CONSIDERATE OF OTHERS. So there you have it: SATURDAY SIX Looks at Guest Etiquette! See you next weekend for the latest installment of the SATURDAY SIX, where we’ll look at something fun from the world of Disney and Universal. If you enjoyed yourself, be sure to check out The Magic, The Memories, and Merch! articles, or, for your listening pleasure, check out the E-Ticket Report podcast. You can also follow Your Humble Author on Twitter (@derekburgan).

Special Thanks to our spirit animal Brandon Glover, Mr. ‘Ohana Tim Grassey, the SAT SIX Fun Squad of Parkscope Joe and Nick, Jammin’ Julia Mascardo, and blogger to the stars Megan Stump for their invaluable assistance with this article. Be sure to also check out Brandon on The Park Blogger podcast with goofballs co-hosts Aengus Mackenzie and LitemAndHyde , while fellow Potterheads may enjoy Meg’s work on the Central Florida Slug Club.