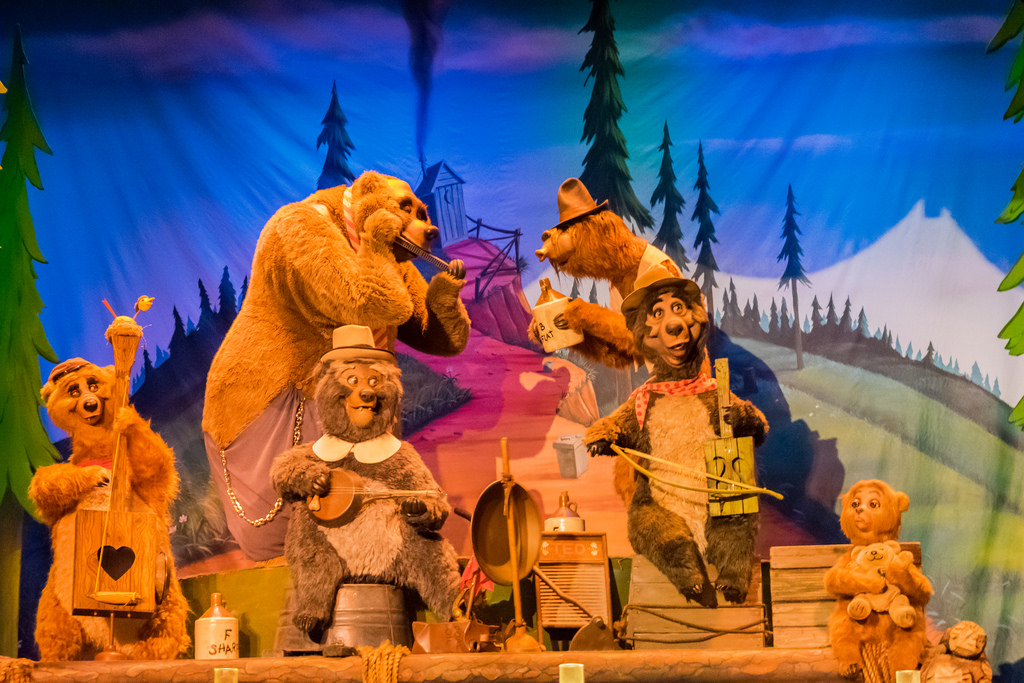 This week’s SATURDAY SIX takes a look at FRONTIERLAND at Disney’s Magic Kingdom! When Walt Disney created Disneyland in 1955, the genre of Westerns in American pop culture was in its heyday. John Wayne was a giant movie star, Gunsmoke had just started on TV, and Disney itself had a giant hit on its hands with the Davy Crockett series. So it was only natural that one of the lands in the world’s first theme park would be based around the concept of the Old West. The original Frontierland in Disneyland contained few traditional attractions as we know today, and instead was a much more open concept that allowed guests to explore the wilderness  with – believe it or not – the use of stage coaches and even pack mules. Over the years the theme of Frontierland would evolve, including the additions of two of the most beloved rides in any Disney land. Today we’re going to take a look at our favorite parts of this incredible land in Walt Disney World, and let’s kickoff the countdown with…

When Walt Disney World opened in 1971, there were no actual rides in Frontierland. The Walt Disney Railroad went through the area, there was a Davy Crockett canoe experience, and there was the Country Bears Jamboree. Now, if you were to go to the Magic Kingdom today, the one attraction that would never have a chance to be built is Country Bears. Even with massive changes to the show over the years, the show is what many guests would consider “politically incorrect.”  For me personally, Country Bears – along with Enchanted Tiki Room and PeopleMover – is one of my favorite things to do in any theme park because of its charm. Unlike what we are going through today, Country Bears doesn’t have an IP shoved into it in order to sell more merchandise. It is old school Disney at its best, amazing animatronics doing a show with humor and catchy songs. In fact, when Country Bears first opened it was so successful that it became the first original attraction in Florida to be replicated out in Disneyland. Pro Tip: Check your times guide and be around for the Hoedown Happening that takes places outside the Country Bears Jamboree. Here guests get to “hoot and holler” with Disney characters and Cast Members as they dance to music.

With crowds becoming overwhelming at times at the Magic Kingdom, one place for respite is at Tom Sawyer Island. It is a surprisingly large area to explore that is filled with details that you would never know existed if you only saw the area from walking around it in Frontierland. The attention to detail is second to none, and it is a place you can really feel transported to another time and place as you are completely separated from the rest of the park. This is one of those places that kids don’t want to go to because there are no rides, but once you’re there it’s hard to get them to leave because of what an immersive adventure it can be.

A while back we did a SATURDAY SIX on the lowest-rated attractions at Walt Disney World and the Shootin’ Arcade made the list. That said, this is attraction that hopefully stays in the Magic Kingdom as long as possible. One reason is because it’s an “upcharge” that is actually reasonable. For just $1 – a price which many pressed pennies cost now – guests get 35 “shots.” That’s a value in any economy. Guests also get to experience what it’s like holding and shooting a rifle at targets, which is pretty amazing considering the lengths Disney went to in 2015 in removing all guns from the parks.

Next to me in the blackness lay my oiled blue steel beauty. The greatest Christmas gift I had ever received, or would ever receive. – Ralphie Parker, A Christmas Story

With a tex-mex menu, incredible toppings bar, large seating area, and fun theming throughout, for me Pecos Bills is hands-down the best quick service location in the Magic Kingdom (granted that’s not the highest bar, but still.) As a fan of the Old West (both real and mythological,) I love walking around and seeing the references to characters like Annie Oakley and Paul Bunyan. The menu includes items such as burritos, fajitas, and tacos along with “southwest” style burgers that you can completely load up with items from the toppings bar. For me, places like Cosmic Rays and Pinocchio Village Haus are a NAY NAY and instead you’ll find me at Pecos Bill’s with a YEE HAW! (And please Pecos Bill, PLEASE bring back the Rio Grand Nacho Challenge, one of the best food values on property.)

The wildest ride in the wilderness!

The first major addition to Frontierland came in 1980 with the introduction of Big Thunder Mountain Railroad. A thrilling coaster experience that helped draw people away from Tomorrowland and Space Mountain, Big Thunder has a ton of fantastic Disney details (many of which you can’t take in because you are flying by them so fast.) The Big Thunder experience became even better in recent years with a much-needed overhaul of the queue. This added some fun details – including the introduction of Barnabus T Bullion – along with an interactive queue where guests can set off “explosions” on the track. Keep your eyes open when walking the queue to see references to various Disney Imagineers (including Marc Davis,) plenty of word puns, and even The Apple Dumpling Gang. As for the ride itself, hold on to your 10 gallon hat, as this “runaway train” is fast and furious, but without the scary drops of larger coasters. It is the perfect ride to get kids to become coaster enthusiasts.

RELATED: Fans of Big Thunder will want to check out the Big Thunder Mountain Railroad comic book series by Marvel.

In the 1990s, the last major addition to Frontierland arrived in the form of Splash Mountain, and what a doozy it was. The greatest flume ride ever made, Splash Mountain is a 10 minute long ride that includes over 100  animatronics, a great story, catchy songs, and the biggest drop of any ride at Walt Disney World. Splash Mountain’s iconic last drop is so famous it has been seen in TV shows, and has had countless guests try to top each other in creative poses on the way down. While the waits can be quite long during warm weather, the rides length makes it worth while (as compared to say Peter Pan’s Flight, where the reaction is “this ride can’t be over already, can it?) Splash Mountain is the quintessential Disney experience because it takes an experience we’ve all done 100 times and completely spins in on its head and makes an unforgettable moment filled with laughter and thrills.

So there you have it: Six Reasons we love FRONTIERLAND at Disney’s Magic Kingdom! See you next weekend for the latest installment of the SATURDAY SIX, where we’ll look at something fun from the world of Disney and Universal. If you enjoyed yourself, be sure to check out The Magic, The Memories, and Merch! articles, or, for your listening pleasure, check out the E-Ticket Report podcast. You can also follow Your Humble Author on Twitter (@derekburgan).

Special Thanks to crack staff photographer Brandon Glover, my personal protege Hunter “Elvey” Underwood, photo wunderkind Mike Sperduto, The Foursquare Mayor of Guest Relations Tim Grassey, Disney photography Icon Tom Bricker, and blogger to the stars Megan Stump for their invaluable assistance with this article. Be sure to also check out Brandon on The Park Blogger podcast with goofballs co-hosts Aengus Mackenzie and LitemAndHyde , while fellow Potterheads may enjoy Meg’s work on the Central Florida Slug Club.