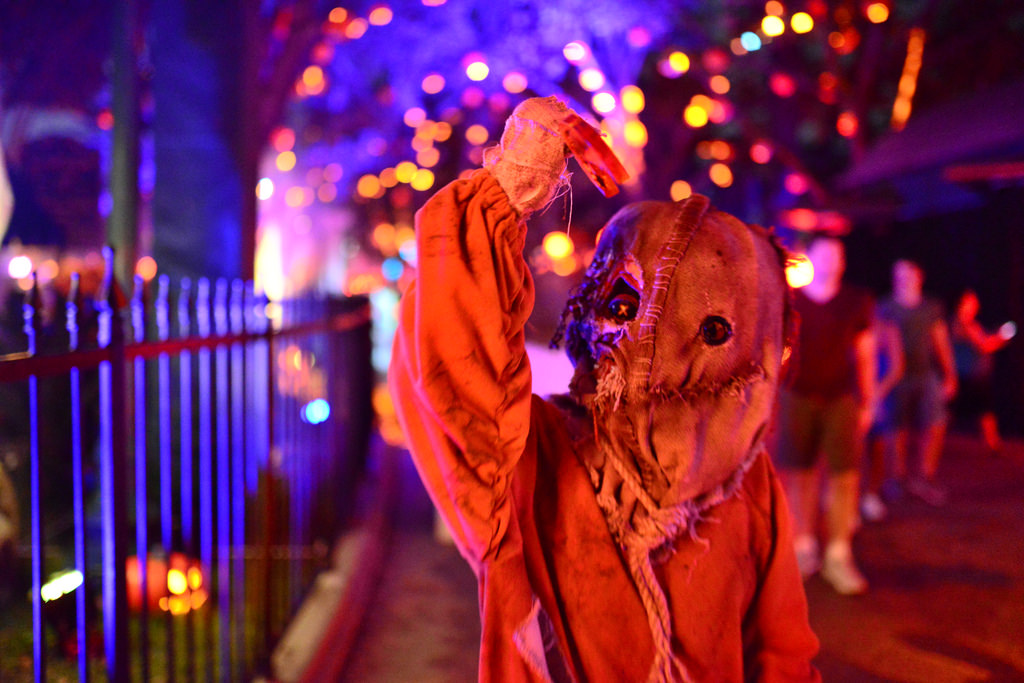 A perennial Golden Ticket winner for Best Halloween Event, HHN 27 faced two rather large challenges in 2017. For the first time in four years. the blockbuster sensation AMC’s The Walking Dead IP would not be part of the event. More importantly, longtime HHN creative lead Michael Aiello moved up on the corporate ladder at Universal, leaving the event in the hands of show director Patrick Braillard. Today we’re going to look at our favorite parts of HHN, and let’s kickoff the countdown with…

During HHN, the streets of Universal that are normally lined with churro carts become home to elaborately designed set pieces filled with costumed characters. This year’s lineup includes The Altars of Horror as you walk into the park in Production Central, The Purge in New York, Invasion! in San Francisco, Trick ‘r Treat in Central Park, and Festival of the Deadliest in Hollywood. Each of these locations have unique characters, and there is also “roaming hordes” of clowns wielding the ubiquitous HHN chainsaw that you will see mostly in the Springfield USA area. Lots of great photo opportunities here.

HHN always delivers in the snack department, and this year is no different as returning favorites such as the Twisted Taters, Cheesesteak, and Funnel Puffs (from this year’s Mardi Gras celebration) join new items such as mini-donuts on a stick and pizza fries. Louie’s Italian Restaurant in New York is also offering calzones during the event. Pizza fries immediately became the must try item of the event and are a monumental leap above the infamous pizza dog of HHN past. The donuts are available in different varieties, come with dipping sauce, and are served on a stick, which just about makes them the perfect snack to walk around with.

In the area of drinks, Universal went in a different direction this year with a concept involving “Liquid Courage,” “Liquid Fear,” and a combination of the two called “Midnight Madness.” The drinks are served in a split cup with a cool looking twisted straw, but unfortunately the end result is not as great as idea itself.

Thanks to Hurricane Irma, the Academy of Villains show is temporarily taking place on a make-shift stage set up in front of the Horror Make Up Show. A dance troupe which made its HHN debut last year, the Academy of Villains is a far cry from The Carnage Returns show which occupied a similar space at HHN 25. Don’t get me wrong, I absolutely loved the intensity of The Carnage Returns and think it is one of the most memorable things I have ever seen at HHN, but I also felt really uncomfortable watching it with young kids around. The Academy of Villains routine is much more family friendly and combines dancing and acrobatics in a fun and unique way.

The calling card for HHN is its haunted houses, and this year has one of the strongest top-to-bottom lineup in years. American Horror Story, The Shining, Saw, Ash vs. Evil Dead and Horrors of Blumhouse are the IP driven houses, while Dead Waters, The Fallen, Hive, and Scarecrow: The Reaping are the original houses. Surprisingly, Horrors of Blumhouse, which contains elements from popular Bluhmouse films Sinister, Insidious, and The Purge, does not include the smash hit Get Out from earlier this year.

In most years there is a general consensus of what the best houses are and which ones weren’t so good, but this year many guest’s best list is wildly different than others, which shows the high level of quality throughout. Universal’s own houses have been killing it in recent years and this year is no exception with Dead Waters and Scarecrow: The Reaping being visually incredible and having some really great scares inside. While The Shining house may not deliver on the scares like others, it more than succeeds on bringing you into the story of the film, which is always what I wanted as a fan of movies such as An American Werewolf in London, The Cabin in the Woods, and Krampus at previous HHNs.

# 2 – The Unmasking the Horror Tours

The absolute MUST DO for any HHN fan is the Unmasking the Horror Tours, which are a lights on look at several of the haunted houses. Not only do you get to see AMAZING details that you will never notice while walking through the houses during the event, but you are led through the tour by a Universal VIP tour guide who gives background information on the houses and how HHN operates.  It’s a fascinating behind-the-scenes look at one of the premier Halloween events in the country. To get an idea of the things you will see, you can check out the articles we did on the tours from HHN 23 including Morning Menace (La Llorona, The Walking Dead, The Cabin in the Woods) and Afternoon Abominations (Resident Evil, An American Werewolf in London, Evil Dead).

I can not recommend these tours highly enough. Not only do you get to see so much incredible detail at the houses (much of which you can’t see at night because it is so dark,) but the VIP tour guides go through how the scares are done, explaining the “tricks of the trade.” I would consider myself a casual HHN fan and this is one of the best tours I have taken in any theme park.

Your Humble Author’s absolute favorite part of HHN every year is Bill & Ted’s Excellent Halloween Adventure. The only good thing to ever take place inside the Fear Factor stage show set, Bill & Ted is a hilarious take down of the year’s best and worst of pop-culture mixed in with dancing by what you would call conventionally attractive people. While no photos or videos are allowed during the show, this year’s show includes references to Game of Thrones, Sean Spicer, Stranger Things, EPCOT’s Food & Wine Festival, Justin Bieber, and a whole lot more. Being the last year, Bill & Ted also had a lot of jokes at the show’s expense, and a huge payoff to the long-running sex tails joke from Avatar. As theme park fans, we have lost a lot this year including The Great Movie Ride, Wishes, and Universe of Energy, but for me not having Bill & Ted around in future years is the biggest loss.

Anyone who reads our sister article The Magic, The Memories, and Merch! knows how much we love our theme park merchandise. HHN always brings fun items to the table, including a brand new Uni Mini (been a while for one of those at the parks.)

We here at the SATURDAY SIX are huge fans of Universal’s “games of skill” (especially the hilarious ones in Springfield USA) but we can’t deny they are a very hot button topic for many others. HHN brings out their own set of carnival games with great items that can’t be bought at any store in the park.

So there you have it: Six Reasons We Love Universal’s Halloween Horror Nights 2017! See you next weekend for the latest installment of the SATURDAY SIX, where we’ll look at something fun from the world of Disney and Universal. If you enjoyed yourself, be sure to check out The Magic, The Memories, and Merch! articles, or, for your listening pleasure, check out the E-Ticket Report podcast. You can also follow Your Humble Author on Twitter (@derekburgan). 6 Snacks at the Universal Orlando Resort You Gotta Try

The 6 Best Meet and Greets at Universal Studios Florida

The 6 Best Queues at the Universal Orlando Resort

Special Thanks to crack staff photographer Brandon Glover, my personal protege Hunter “Elvey” Underwood, the bio-est of all reconstructs @bioreconstruct, “Is that a tripod in your pocket or are you just glad to see me?” Travis Terrell, and blogger to the stars Megan Stump for their invaluable assistance with this article. Be sure to also check out Brandon on The Park Blogger podcast with goofballs co-hosts Aengus Mackenzie and LitemAndHyde , while fellow Potterheads may enjoy Meg’s work on the Central Florida Slug Club.