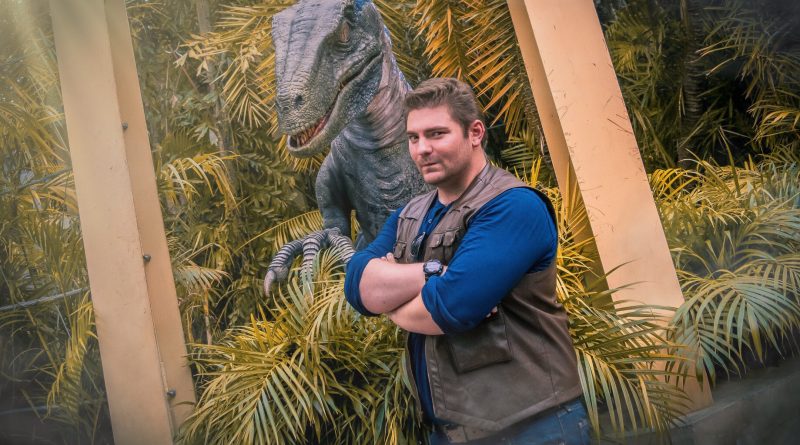 This week’s SATURDAY SIX takes a look at Six Reasons We Love JURASSIC PARK at Universal’s Islands of Adventure. In 2015, Jurassic World became an instant worldwide smash becoming the first film in history to earn $500M worldwide in its opening weekend, and going on to become one of the five highest grossing films of all time. This weekend comes the anticipated sequel – Fallen Kingdom – and that means its time for us to return to one of our favorite lands in Jurassic Park.

While the Amazing Adventures of Spider-Man has been the critic’s darling since the day it opened in 1999, and the Wizarding World of Harry Potter completely changed Orlando tourism when it debuted in 2010, Jurassic Park has always been my favorite “island” in the park. Why? For as much as a phenomenon that Jurassic World was, those of us a certain age can remember when the original Jurassic Park film was released and the seismic effect it had on not just the film world, but pop culture in general.

The tagline for the original Superman film in 1977 was “you will believe a man can fly,” and the original Jurassic Park‘s might as well have been You will believe that dinosaurs have been brought back. The ground breaking CGI and physical effects work were years ahead of their time, to the point where the movie has aged better 25 years after its release than pretty much any special effects laden film made in the last 10 years, let alone 20. The score by John Williams is iconic and well known as those in Star Wars and Jaws. And lastly, it’s about dinosaurs, and everything is better with dinosaurs (at least that’s what Tom Bricker keeps trying to tell us.) So today we’re heading into Universal’s Islands of Adventure and checking out our favorite parts of Jurassic Park, starting with…

Some readers may remember the time that Walt Disney World tested a walking velociraptor experience at Animal Kingdom. It was something that was impossible for many of us to forget (no matter how hard we tried.) So when Universal announced they were opening a Raptor Encounter, to say we were skeptical is an understatement. We should have had more faith in Universal Creative though, especially after they nailed the Transformers meet and greet over in USF. Because it turned out the Raptor Encounter is perfect. With raptor puppets designed by Michael Curry (the same genius behind the puppets in Finding Nemo: The Musical and Epcot’s legendary Tapestry of Nations parade) and a themed set that hides the human actor, this is a meet and greet that will bring you right back to the days of When Dinosaurs Ruled The Earth. The raptor sound effects and the Team Member “Gamekeeper” are the cherries on top of this awesome theme park sundae.

What I love about the Raptor Encounter is that it is one of the few theme park attractions where not only is your experience fun, but it’s great just watching others interact with the raptor while waiting your turn in the queue. Now that Talking Mickey has taken a vow of silence, it has become the best pound for pound meet and greet experience in the theme parks. Now, when Jurassic World came out in 2015, Universal ramped up the SYNERGY MACHINE with an insanely great line of t-shirts that you could get in CityWalk. For Fallen Kingdom, Universal Creative topped themselves as the character “Blue” was added to the Raptor Encounter.

But wait! The SYNERGY MACHINE is not done yet. Out in CityWalk, our beloved Voodoo Doughnuts have created a special Raptor Claw doughnut. Filled with raspberry sauce, covered in chocolate, and topped with sprinkles, this is one doughnut to make the keto diet go extinct.

One of the most underrated quick service locations in all of Universal is Thunder Falls Terrace. It has large indoor and outdoor seating areas that face the big drop of Jurassic Park River Adventure, so you can see (and the hear the screams of) guests as they plunge down into the water. This is even more fun to watch when guests walk by this area not realizing they are about to be in the Splash Zone and get soaked. It also has a menu that contains many of the items found at the Three Broomsticks, so your family can enjoy items such as charbroiled ribs, rotisserie chicken and corn on the cob instead of the normal theme park burgers, chicken strips, and pizza.It is also one of the only counter service locations where you can get a mixed green salad made in front of your eyes. Like Voodoo Doughnuts, currently Thunder Falls also offers some special items themed to Fallen Kingdom.

While Hogwarts Castle has replaced it, there was a time when the Jurassic Park Discovery Center was the “weenie” of Islands of Adventure. It is what your eyes are immediately drawn to as you exit Port of Entry and does an incredible job of replicating the feel of the visitor center from the original Jurassic Park film. Because there are no rides at the Discovery Center, many guests now pass it by, but it is worth checking out to experience all the interactive elements inside. With tributes to Mr. DNA and Dennis Nedry’s Barbasol can, this area is a must for any hardcore JP fan, but even your average park guest is going to enjoy seeing an animatronic raptor being hatched. Also underrated is going out the back entrance of the Discovery Center (the side you see from Port of Entry) and just taking in the gorgeous view you have of IOA. The area is relaxing and a fantastic place to take photos. Also located in the Discovery Center is the Burger Digs restaurant and one of the more unique gift shops in the entire park (selling everything from silly dinosaur plush to high end amber jewelry.)

I am going to take some heat for this one, especially from hardcore Universal fans. But that’s okay, and I’m ready to die on this hill. Pteranodon Flyers makes the “worst” list for many guests, mostly because of its horrendous loading time. I’m not here to defend that, but I think that it is awesome that a theme park has an attraction which caters directly to small guests, especially Islands of Adventure. One of the knocks against Universal, and one they have made great strides in overcoming, is a perception that the parks are not kid friendly.  At IOA, there is one ride after another that they are told “No” to, but not only is Pteranodon Flyers a “Yes,” it is the one ride at either park where you have to be with a small child to ride. I think it is fantastic that there is an opportunity to make these smaller riders feel special, that they can go on a cool ride that their older brothers and sisters can’t, because it’s almost always the opposite. Pteranodon Flyers is also cool, having that Magic Kingdom Skyway-feel that many of us miss. Thankfully the attraction has gone to a “virtual queue” experience, which is a huge positive, and the queue itself is gorgeous to walk through.

Time to say it: Camp Jurassic is the #1 most underrated attraction in Orlando. Because there are no rides for adults, many guests completely skip this area, but I implore you to check it out on your next trip to Universal. This is the most immersive play area I have seen in my entire life, with two completely different components. Think of it as a dinosaur themed Tom Sawyer Island, except with a lot more stuff to interact with. Slides, rope bridges, water cannons and more are mixed along an insanely elaborate rain forrest theme. Forget kids, I have gotten lost in this area several times… it’s incredible. But the real draw here is the amber mines. It’s almost impossible to believe these actually exist in a theme park, let alone a kid’s play area. The caves are so detailed and immersive it is as if you stepped into another world. Highest possible recommendation.

Jurassic Park River Adventure hits a lot of great beats for me and it all starts with the attraction being a boat ride. From the Jungle Cruise and Pirates of the Caribbean at the Magic Kingdom to Living with the Land and Gran Fiesta Tour starring the Three Caballeros in Epcot, if it’s a boat ride, it’s probably one of my favorite attractions in the park. Our journey on JP River Adventure begins by passing through the iconic Jurassic Park gates and proceeds to give a Jungle Cruise-like leisurely ride while enjoying some larger-than-life dinosaurs. As theme park rides will do, “something goes terribly wrong” and we find ourselves smack dab in the middle of a raptor attack and surprise, you’re NOT the alpha. In fact you just may be dinner. It is during the second half of the ride when the tension gets amped up, highlighted by the incredible T-Rex animatronic and a huge drop to cap off the ride. When all the effects are working, Jurassic Park River Adventure is one of the greatest water rides in any theme park.

Get out your cameras while in Jurassic Park, because the land is filled with places to take some fun photos with friends and family.

Recently a whole bunch of items from the former Triceratops Encounter attraction have shown up at the Prop Shop in Universal Studios Florida. This is only interesting because many insiders are speculating that we are very close to the Universal Orlando Resort announcing a new attraction inside the Jurassic Park land, taking over that spot in the land. The most informed speculation is that the new ride will be a family friendly roller coaster. While its a shame the Triceratops Encounter has been shuttered for a while (it’s a unique concept for a park, and references an incredibly memorable moment in the first film,) it is definitely exciting to think we could be getting a new dinosaur based ride in the near future…

So there you have it: Six Reasons We Love JURASSIC PARK at Universal’s Islands of Adventure! See you next weekend for the latest installment of the SATURDAY SIX, where we’ll look at something fun from the world of Disney and Universal. If you enjoyed yourself, be sure to check out The Magic, The Memories, and Merch! articles, or, for your listening pleasure, check out the E-Ticket Report podcast. You can also follow Your Humble Author on Twitter (@derekburgan).

Movies and Television Shows Filmed at the Universal Orlando Resort

Special Thanks to our spirit animal Brandon Glover, hot shot Michael Carelli, photo wunderkind Mike Sperduto, Universal park icon Hate To Fly, the Siren of Secret Shopping Hedgehogs Corner, the sommelier of Tony’s Town Square Brian Carey, the SAT SIX Fun Squad of Parkscope Joe and Nick, crazy cat lady – and our Fearless Leader – Laurel Stewart, and blogger to the stars Megan Stump for their invaluable assistance with this article. Be sure to also check out Brandon on The Park Blogger podcast with goofballs co-hosts Aengus Mackenzie and LitemAndHyde , while fellow Potterheads may enjoy Meg’s work on the Central Florida Slug Club.