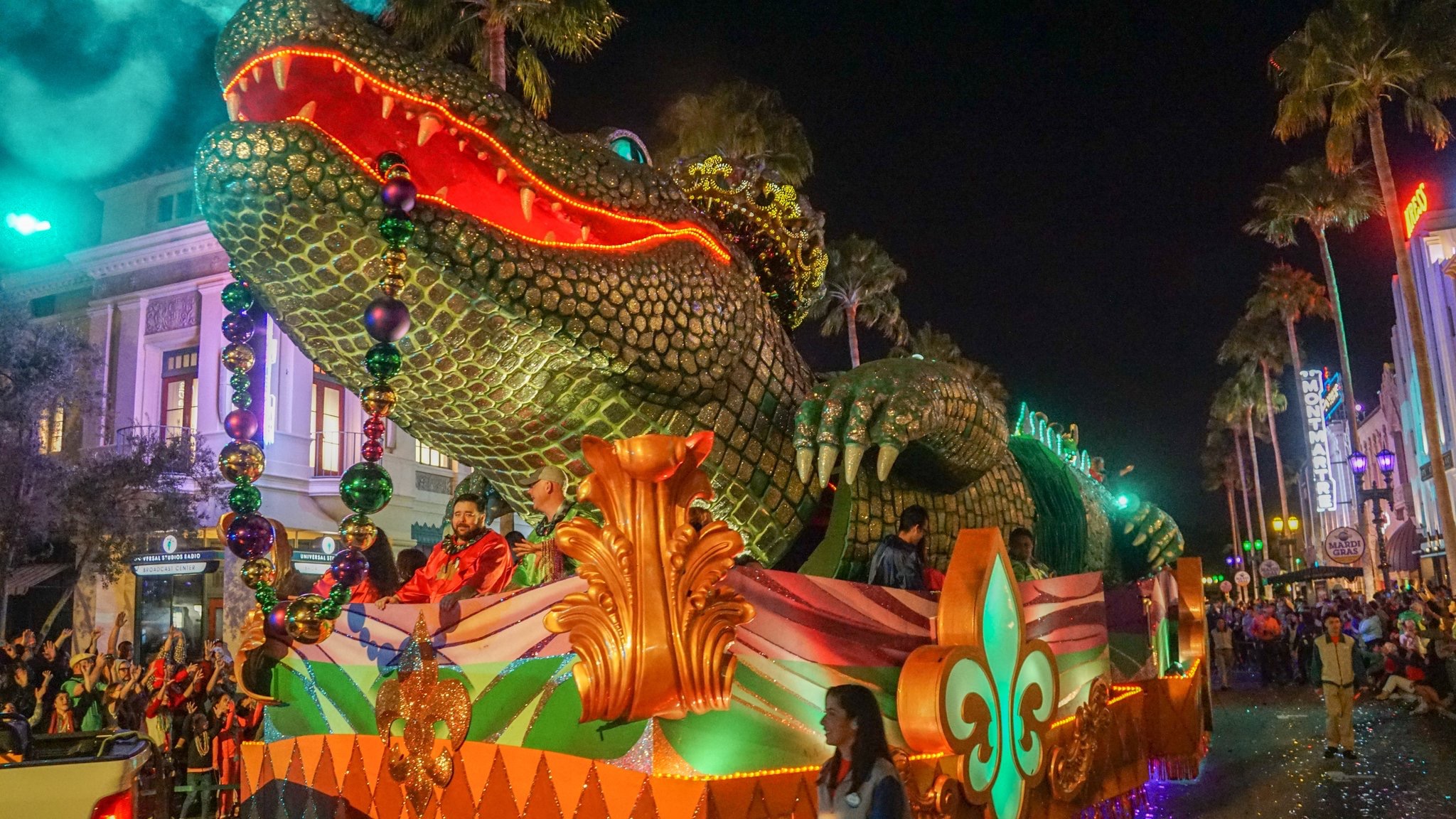 This week’s SATURDAY SIX takes a look at Six Reasons We Love Universal’s Mardi Gras Celebration. No one loves theme park events more than us. Mickey’s Not So Scary? Fantastic. Halloween Horror Nights? Even better. Grinchmas, Mickey’s Very Merry, and Food & Wine? Can’t wait for each of them. Earlier this year, EPCOT’s Festival of the Arts was shockingly good and we’re incredibly excited it is already scheduled to return in 2018.  Villain’s Unleashed? Okay, that was the exception that proves the rule.

One of our favorite events of the year takes place at Universal Studios Florida and is included with regular park admission. It has unique food options, great music, and Universal’s best parade. That’s right, we’re talking about Mardi Gras, and today we’re going to look at six reasons why this is the best party outside of New Orleans itself and we’ll start off with….

One of our favorite places on Disney property is Port Orleans French Quarter and a big reason for that is the cajun style food. Beignets, king cake, po’ boys, shrimp gumbo, red beans & rice, Andouille sausage, and jambalaya are all on the menu at Universal’s Mardi Gras. In fact, these options in the French Courtyard combined with the offerings at Fast Food Blvd and Diagon Alley make USF the greatest single place on Earth for theme park snack eating. This year there is a new item in the Funnel Puffs. Deep fried donut holes which you can get covered in a variety of toppings including chocolate, fruit, sugar, and whipped cream. While Mardi Gras in years past put a spotlight on VooDoo Juice, this year’s event has has several signature drinks available including the Berry Vicious VooDoo,  the Carnival Cocktail, the Rajin’ Rumbalaya, and the Masquerade Madness Cocktail (which combines the two previous drinks.) Trust us on this one, throwing and catching beaded necklaces is even more fun after a few adult beverages.

# 5 – The Walk Around Characters

Get your cameras ready because there are a ton of colorful characters throughout the park, and all of them would love to take their pictures with you. The street performers include groups of characters that are representing each parade float that will come later in the evening. The interactions that come with some of these characters can really elevate your Mardi Gras experience, and you just may get a fun surprise (but we’ll get to that later).

One of the things I truly loved about Disney’s Night of Joy parties was the amount of smaller bands and musicians that they bring in and let perform in the park. It’s great to see the headliners, but it is also nice to appreciate the smaller names, many of which guests would never know of, but has to be a once-in-a-lifetime moment for the performers. For Mardi Gras, Universal brings in authentic New Orleans musicians for live performances. This is a wonderful touch that lets guests enjoy bands in a more intimate setting. In previous years, Mardi Gras had a small stage set up in the French Quarter Courtyard, but this year the bands have been out walking the streets as they play their tunes. One area that USF dominates in is live music, and these intimate shows have the vibe that the amazing Blues Brothers and Celestina Warbeck bring to the table.

That said, Universal generally brings in some heavy hitters for their main stage concerts. In the last couple years we have seen Kelly Clarkson, Weezer, Robin Thicke, Daughtry, Pitbull, Matchbox Twenty, and Demi Lovato, all of whom could easily sell out their own shows at the Hard Rock Live next door. While this year does have some big acts, including the All-American Rejects, Ne-Yo, and Toby Keith, for the most part the line-up has the sort of feel we get at the Eat to the Beat concert series during Food and Wine. Oliva Newton-John, UB40, Collective Soul, and Earth Wind & Fire certainly have brand names, but seem to skew a bit older than the crowd Universal generally targets. It is great when you look atthe wide array of acts that Universal brings in, and while each particular one may not be your cup of tea, you can almost guarantee there’s another one coming that you will want to see in person.

One of the most popular things at every Universal Mardi Gras celebration at Universal is the parade. Filled with colorful floats and characters, the parade has a unique energy that fits perfectly within the party theme. While Disney is the market leader in incredible parades such as Festival of Fantasy and the Main Street Electrical Parade, Universal’s Mardi Gras is a lot of fun. Now, just as Mickey’s Boo-to-You Parade generally has few changes from year to year, Universal’s Mardi Gras Parade usually only has a couple changes…but this year there are SIX new floats (around these parts we like that number.)  In a great touch, there are dedicated viewing areas for those traveling with children (by the Brown Derby hat shop) and for Universal Orlando Annual Passholders (by Mel’s Drive-In.)

We mentioned in a previous SATURDAY SIX that one of the neat benefits of doing the Star Wars Guided Tour at DHS is that you get an opportunity to be part of the March of the First Order. For Mardi Gras, Universal allows Annual Passholders to sign up for a chance to ride on one of the floats during the parade and throw bead necklaces to the crowd! The Passholder can be accompanied by up to 5 guests (who do not have to be Annual Passholders) which can make for a incredibly fun group experience. For more information on how to sign up for this opportunity: CLICK HERE

We mentioned earlier about interacting with the street performers, right? Well that is how you can get a chance to obtain an official Mardi Gras 2017 coin. Sometimes the characters will ask you trivia, other times they will play a fun game with you to “earn” the coin, but no matter how you get your hands on one, this little coin represents everything we love about theme parks.

So there you have it: Six Reasons We Love MARDI GRAS at Universal! See you next weekend for the latest installment of the SATURDAY SIX, where we’ll look at something fun from the world of Disney and Universal. If you enjoyed yourself, be sure to check out The Magic, The Memories, and Merch! articles, or, for your listening pleasure, check out the E-Ticket Report podcast. You can also follow Your Humble Author on Twitter (@derekburgan).

Special Thanks to crack staff photographer Brandon Glover, the bio-est of all reconstructs @bioreconstruct, Grim Grinning Hosts podcaster Travis Terrell, Rhode Island’s Favorite Son Ryan Kennedy, Orlando United‘s own Bri-Man, SATURDAY SIX pledge Hunter Underwood, and blogger to the stars Megan Stump for their invaluable assistance with this article. Be sure to also check out Brandon on The Park Blogger podcast with goofballs co-hosts Aengus Mackenzie and LitemAndHyde , while fellow Potterheads may enjoy Meg’s work on the Central Florida Slug Club.