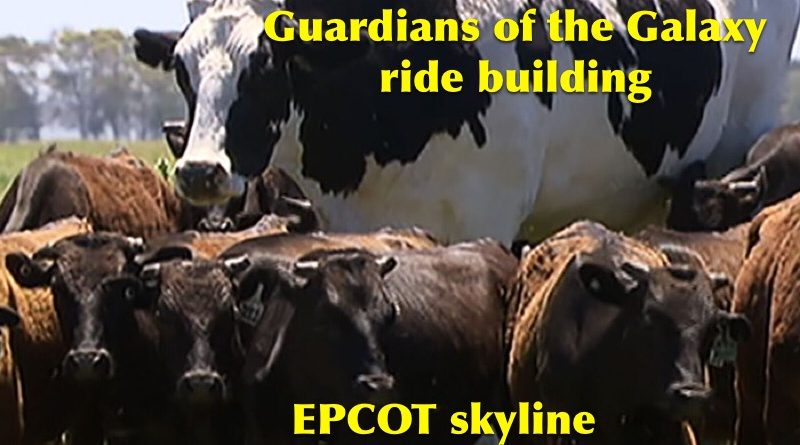 This week’s SATURDAY SIX takes a look at theme park news via MEMES! This summer we took a look at some popular memes that had been used in the theme park community, and due to guest demand this week we are back with more. In today’s social media, the lifespan of a meme – even a great one – can be lightning quick, so you have to have constant vigilance when wasting your time going through apps like Twitter and Facebook. Fear not as we’ve done all the hard work for you, Dear Reader, and are back to report with our findings.

One of the most recent pictures to go viral was one featuring Knickers the steer. If you’ve never seen a picture of Knickers, at first it can be quite jarring. The animal is described as “taller than Michael Jordan and weighs more than a Mini Cooper car.” Now I have no idea what a Mini Cooper car weighs, but that certainly sounds impressive. @ImQuixotic used the picture for a spot on reference for how out of whack the Guardians of the Galaxy show building looks in EPCOT. To show the scale of the Guardians of the Galaxy building and what Disney may do to “hide” the show building we reached out to the conceptual artists in the SAT SIX IT dept (aka the “mark up” button on iPhone photos.)

Not to be outdone, posters over at WDWMagic.com have been producing their own concept art of what the GOTG show building may look like, with some wonderful results.

Anyhoo, back to our giant cow meme…@SuperWeenieHtJr, a great follow on DisTwitter, had fun with the picture and used it to explain where Disney resides in most of our lists of “priorities.” Pretty accurate, although in my personal case “Junk From The Disney Outlet Store” would be an even bigger cow standing next to Knickers. Sometimes memes really catch fire in the Real World, such as the this template which used a “bait and switch” formula where the poster is describing a certain type of person, but clearly using attributes that are specific to someone. The meme ends with, “He’s not your man, he’s _____.” This meme went everywhere on social media, and it also went wild on theme park Twitter, with some really creative responses, such as this one using lyrics from a well known Disney song… In a nice touch, Wesley Snyder uses this year’s “silencing of Talking Mickey” in his version. Always fun to see a Carousel of Progress reference. The boys at Parkscope used Bill Weasley from Universal’s Escape From Gringotts attraction. Hopefully you all know the Angry Splash Mountain Lady meme. She is a lot of fun on DisTwitter, and even got in on the act with the He’s Not Your Man meme. We’ll close with the Twitter account for the Orlando International Airport as they have been killing it in the social media game. @MCO is right up there with the Universal Orlando Resort, Moon Pie, and Wendy’s Twitter accounts for major brands that are fun to watch interact with others. For the He’s Not Your Man meme, @MCO used an iconic part of the airport, and a “man” that most visitors to Orlando have seen many times. Obviously the biggest movie of 2018 was the worldwide smash Avengers: Infinity War. SPOILER ALERT FOR THE THREE PEOPLE ON EARTH WHO HAVEN’T SEEN IT – the most memorable moment in the film was when Thanos achieved his goal of getting all the Infinity Stones and snapped his fingers to eliminate half of the population. I personally went into the movie feeling pretty confident who might “die” at the end of the film, but when the Winter Soldier was the first to go I was like, “What?!” This can’t be right. Then Black Panther disappeared and my brain was about to explode. “This can’t be happening. It’s impossible!” When Spider-Man faded away, the movie had me exactly where it wanted. In total shock.

Well, this year Disney – in the form of Bob Chapek, chairman of parks, experiences, and consumer products – also “snapped its fingers” and got rid of a lot of stuff and/or made things seasonal for the sole purpose of saving money on the bottom line. We’ve all been to the parks. We all know how busy they are. Yet somehow Disney can justify closing down Rafiki’s Planet Watch, reduce streetmosphere at DHS, get rid of Rivers of Light shamans, close PizzeRizzo, etc. In each example, you can make a compelling argument for why each item can handle the “cut,” but the problem is that it wasn’t just one thing, it was all of them collectively. Keep in mind, all of these cuts come while raising prices on not just tickets, but also pretty much every item on property, from bubble wands to bottles of Coke and churros. Most reasonable people don’t have a problem paying a premium price for a premium service. But when the price continues to climb while many components of an experience decline (less Cast Members to operate attractions throttling capacity, food quality at restaurants, overworked Mousekeeping and janitors, etc) then an issue arises. Meanwhile, out in Disneyland, A Bug’s Land closed for the upcoming Marvel expansion. Thankfully our pal @SuperWeenieHtJr was around to explain what happened.

Last time we went down the meme rabbit hole we talked about @HamJenkinsIII and his bonkers concept of placing an an iconic picture of Walt Disney – that was taken on the day Disneyland opened in 1955 – and then placing “Walt” in various other areas throughout history, dedicating them. The more absurd the venue, the funnier the picture actually becomes. When all the Florida bloggers were out covering the last day of Rafiki’s Planet Watch at Animal Kingdom, @HamJenkinsIII was there with his brand of humor in full force.

In a true gift to the community, @servoisnaked took this Walt meme idea to the next level. You  may have missed the story, but over summer former President Barack Obama was out on the campaign trail at rallies trying to help Democrats get elected. During one of his speeches, Obama talked about getting kicked out of Disneyland for smoking while on the gondolas. Naturally, a meme was created using a young Obama smoking cigarettes on a Skyway with fellow nicotine aficionado Walt Disney.

# 2 – Disney creates one upcharge after hours event after another

On the E-Ticket Report podcast, I have thrown out the conspiracy theory that Disney has cleverly been intentionally creating problems for guests. I believe this because instead of fixing various problems, they are just encouraging guests to buy their way out of them. For example, everyone who has gone to a Disney park knows how interminable the security line can be. Instead of investing money and making the bag check process fast and efficient like Universal, Disney just offered guests the opportunity to pay for bus ride that would drop them off at location which didn’t have a security check point. Yes, the buses drove through backstage areas that don’t help the “magic” and guests enter in a way the Imagineers didn’t intend when creating the parks, but for prices starting at just $15 per person per day, you get to skip that ridiculous security line. Thankfully that idea didn’t last long, but it didn’t stop Disney from creating more “opportunities” for guests to pay more…

Oh, it takes forever to get from one place to another using Disney free transportation (buses/monorail/boats)? Just pay for a Minnie Van experience and we’ll get you there lickety-split!

The Christmas party hard ticket event is oversold and you still can’t get a good spot for the parade? No worries, here’s an upcharge party within the upcharge party that guarantees you a viewing area! Don’t forget about our numerous dessert parties on regular park days!

The parks are packed during the day and you can’t get  FP+ for rides such as Flight of Passage, Seven Dwarfs Mine Train, or Slinky Dog Dash? Well, just cough up some more money and go to an after hours event! Remember, we’re doing this for YOU!

Like the He’s Not Your Man meme above, the ranking meme went viral and actually started in our own little DisTwitter community thanks to @WaltsFrzenHead (and you need to do whatever you can see the film The Further Adventures of Walt’s Frozen Head, trust me, you’ll love it.) The conceit of the meme is that  – when seeing a list format – the audience is trained to interpret it in a certain way.  However, right at #1 on the list the tables are flipped on the reader, and instead of a normal ranking the list goes in a different direction. The list is then capped off with an observation that ties into the original list idea. For example… I’m not even sure who created this one, but anything with Kermit the Frog making a good, timely joke is right up my alley!

Another recommended follow on Twitter is the Disney Hipsters. Two great guys enjoying their life and common love for Disney. Recently they posted a picture of their son Alfie pointing at their newly put up Christmas tree. Now, aside from the fact that for some reason the Hipsters haven’t taught Alfie to always point with two fingers (it’s the Disney way people) we figured that SNL’s Jebidah Atkinson could also make his views felt on the picture. So there you have it: The SATURDAY SIX Looks at Theme Park News via MEMES vol 2! See you next weekend for the latest installment of the SATURDAY SIX, where we’ll look at something fun from the world of Disney and Universal. If you enjoyed yourself, be sure to check out The Magic, The Memories, and Merch! articles, or, for your listening pleasure, check out the E-Ticket Report podcast. You can also follow Your Humble Author on Twitter (@derekburgan).

Special Thanks to The Elite Brandon Glover, the bio-est of all reconstructs @bioreconstruct, Mr. ‘Ohana Tim Grassey, the SAT SIX Fun Squad of Parkscope Joe and Nick, hot shot Michael Carelli, and Hermione Granger’s tutor Megan Stump for their invaluable assistance with this article. The SAT SIX is inspired each week by goofballs Aengus Mackenzie and LitemAndHyde and you Potterheads will  enjoy Meg’s other blog work over at the Central Florida Slug Club.