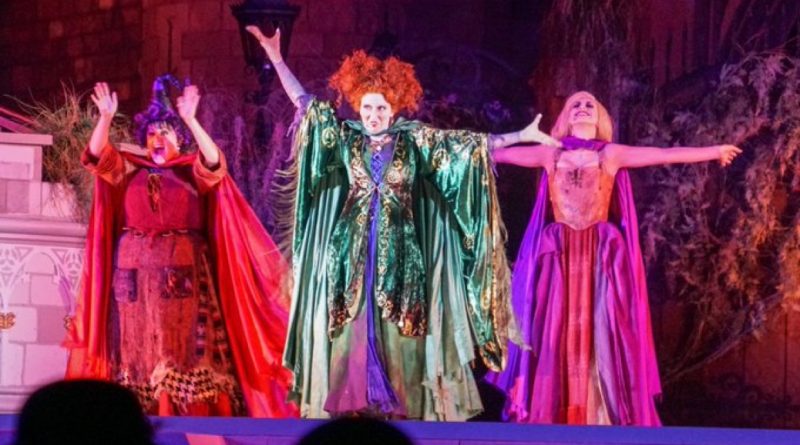 This week’s SATURDAY SIX takes a look at MICKEY’S NOT SO SCARY HALLOWEEN PARTY! For many of us, Fall is our favorite theme park season because with it comes two of the best events in the entire theme park calendar. Universal brings its annual award-winning Halloween Horror Nights while Disney counters with Mickey’s Not So Scary Halloween Party.

Over the years, MNSSHP has become pound-for-pound the best ticketed event at Walt Disney World. It provides guests a lot more “bang for the buck” compared to Mickey’s Very Merry Christmas Party, and the complete disaster that was Villains Unleashed showed that making an event based around villains isn’t as easy as it sounds. Today we’re going to take a look at some of our favorite parts of Not So Scary, and let’s kickoff the countdown with…

First of all, YES, it’s completely illogical to put out the money it costs to go to a hard ticket event like MNSSHP and spend your time waiting in line for candy that you can buy much cheaper at any CVS, Walmart, or supermarket near you. It doesn’t make any sense. Agree 100%. That said, hitting the various candy stops throughout the Magic Kingdom is just plain FUN. In the real world, going trick or treating is one of the biggest highlights of a kid’s year, right up there with Christmas morning and the last day of school in the summer. Having to give up trick or treating when becoming an adult is a tough loss, but MNSSHP gives us a little reminder of how great it was to come home and pick through your candy, separating the good stuff like Kit Kats and Snickers from worthless treats like Necco wafers, raisins, and generic green lollipops. It allows you – even for just the briefest of moments – to be a kid again. To paraphrase the movie Stepbrothers, don’t ever forget how to be a dinosaur.

So grab that treat bag, hit the candy stations, and have a blast!

In my experiences, the Cast Members across the board during MNSSHP are the best you can encounter inside a theme park. Maybe it’s because they get to do something different compared to their normal day at work. Or maybe the MNSSHP crowd itself – with little kids dressed up as Peter Pan and Wendy – aren’t sucking away their life force like a day guest complaining about My Disney Experience being down again. Or perhaps it’s just that I consume so much sugar during the party that it alters my entire DNA, but everyone seems nicer and more helpful. I have nothing but the highest compliments for every CM I have ever encountered at MNSSHP.

Another free item you can get during the party is an exclusive Sorcerers of the Magic Kingdom card. This year features one of our favorite characters with The Orange Bird.

Last year we did a SAT SIX showing some examples of “The Disney Difference.” One area that Disney goes way above and beyond in is when it comes to allergy-friendly experiences at the resort. This extends to MNSSHP as there is a way for vegans and others with specific dietary restrictions to also share in the fun. At each treat location, guests will be given a token that is later exchanged for allergy-friendly treats.

Each year MNSSHP always has interesting food items for guests to purchase exclusively during the party, and 2018 brings several that taste great but also look incredible! Haunted Mansion fans are going to love the Madame Leota-themed tart at Liberty Square market, a hitchhiking ghost doom buggy-themed pastry at Aloha Isle, and a wonderful Master Gracey’s graved-themed worms & dirt snack at Pecos Bills.  You have to love the Nightmare Before Christmas themed Zero waffle sundae at Sleepy Hollow, and you definitely have to see for your own eyes the Oogie Boogie meringue at Gaston’s Tavern. From a Malificent-themed frozen dessert at Storybook Treats to Candy Corn ice cream at Auntie Gravity’s in Tomorrowland, the entire park is filled with new and “scary” snacks!

Possibly the hottest item at the party this year is the Oogie Boogie popcorn bucket, but for me the best popcorn bucket is the one themed like a boiling cauldron, complete with lighting feature!

In previous years, the Haunted Mansion (appropriately) was given a little TLC but for the most part all the other attractions had very little to no changes whatsoever. This year brought spooky “plussing” to several attractions and we loved it! It’s always been a blast that Haunted Mansion had characters (Madame Carlotta and Butler Broome) that interacted with guests during the party, and this year Disney added live characters into the queue and actual attraction for Pirates of the Caribbean. Space Mountain went completely dark while the Mad Tea Party had the opposite effect with a whole new colorful lighting package. These additions made an already solid event much better and it would be amazing to see another attraction or two added to the mix getting plussed in upcoming years.

Time for a whole new look at Mad Tea Party!

No one outdoes Disney when it comes to parades, and Mickey’s Boo-to-You Halloween Parade is, in my mind, the best one going today. This is helped in large part by having one of the catchiest soundtracks of any Disney attraction, parade or otherwise. Many guests will find themselves singing out loud or humming the “Boo-to-You” song for days – if not weeks – after the party. The parade starts off with a bang, as the Headless Horsemen makes his way by to start, and this is followed by a cavalcade of all the major Disney characters, including many villains who you almost never see out and about. Where the parade takes it up a notch is the segment based around the Haunted Mansion. This memorable part of the parade featurs gravediggers using their shovels to create sparks on the pavement, some really creepy ghost dancers, and floats featuring Madame Leota’s grave and the Hitchiking Ghosts. This may be the the only part of the entire night that inches above a “G” rating, but it is spectacular.

The Haunted Mansion’s Ghost Host narrates Happy HalloWishes in a show that rivals Happily Ever After as the best nighttime spectacular on property. You have a great soundtrack based around the songs associated with Disney villains – including a wonderfully unique take on the Haunted Mansion’s iconic Grim Grinning Ghosts – topped off with an amazing fireworks display that includes the all-too-rare perimeter fireworks (which need to be seen to be believed.)

I have never seen the film Hocus Pocus. To be honest, I have never even wanted to see Hocus Pocus. The Hocus Pocus Villain Spelltacular is such a great stage show that it makes me want to see the movie, even though I realize it has absolutely nothing to do with the show. Like the Boo-To-You parade and Happy HalloWishes, the Spelltacular show features a whole bunch of Disney baddies, including the rarely seen Hades (from Hercules.) My favorite part of Universal’s Halloween Horror Nights was always the show based around Bill & Ted’s Excellent Adventure, because the casting for the Bill and Ted characters was alway spot on. Disney’s casting for the Sanderson Sisters in the Hocus Pocus show is just as good, and their interactions with characters such as Dr. Facilier, Lady Tremaine, and Ooogie Boogie are fantastic. Add in projections onto the castle along with some fireworks and you have a show worth going out of your way to see.

A creepy take on the fan favorite Dapper Dans? Yes please. This frightful quarter can be seen singing away in Frontierland during the party.

In a fantastic touch, the menu screens at Pecos Bills will alter between their normal form and a “spooky” version. This is the type of “little thing” that makes the rising price of a MNSSHP ticket a little easier to justify. For several years I have felt that MNSSHP was getting more expensive while the event itself was just cutting things, but it is stuff like this – as small as it might be – is why I tell friends and family that MNSSHP is a Must Do.

But our absolute FAVORITE thing at Mickey’s Not So Scary….THE GUEST COSTUMES!

Everything up until now you can count on, but what makes MNSSHP extra special is the creativity displayed by guests themselves, as many arrive in costume. Sure, you’ll see many store-bought Mr. & Mrs. Incredible costumes, but its the guests who make their own which will really turn your heads. Here are some of our favorites from this year’s party…

Readers of the annual Theme Park Turkeys of the Year awards know that its just a matter of time before Disney makes a high profile typo. Recently it has been in the area of road signage, with last year’s infamous “Epoct” sign and another one earlier this year directing guests to Disney’s “Amimal” Kingdom. Guest Katelyn Woytch took a deep dive and created these costumes…

A while back we did a SAT SIX on Our Favorite Shows That Went To Walt Disney World, and of course Full House took the #1 spot. I mean c’mon, who doesn’t remember Uncle Jessie and Joey doing their radio show from inside The Living Seas pavilion, Danny asking for Vicky’s hand in marriage via fireworks, and of course Michelle becoming “princess for a day?” It was an truly special episode that left an indelible mark on a generation, and one that Courtney Suchart used as inspiration for a MNSSHP outfit.

There was an even a guest dressed up as Disney Spring’s own Eddy Masserati this year (and if you have a picture of that guest, please send it in. UPDATED. SEE BELOW!)

Speaking of getting dressed up, even the Disney Characters themselves get into the Halloween spirit!

So there you have it: Six Reasons We Love MICKEY’S NOT SO SCARY HALLOWEEN PARTY ! See you next weekend for the latest installment of the SATURDAY SIX, where we’ll look at something fun from the world of Disney and Universal. If you enjoyed yourself, be sure to check out The Magic, The Memories, and Merch! articles, or, for your listening pleasure, check out the E-Ticket Report podcast. You can also follow Your Humble Author on Twitter (@derekburgan).

The LEAST CROWDED Mickey’s Not So Scary Halloween Party Dates

Easy DIY Disney Halloween Costumes for Mickey’s Not So Scary

Special Thanks to our spirit animal Brandon Glover, my personal protege Hunter “Elvey” Underwood, the bio-est of all reconstructs @bioreconstruct, the SAT SIX Fun Squad of Parkscope Joe,and blogger to the stars Megan Stump for their invaluable assistance with this article. The SAT SIX is inspired each week by goofballs Aengus Mackenzie and LitemAndHyde and you Potterheads will  enjoy Meg’s other blog work over at the Central Florida Slug Club.

3 thoughts on “SATURDAY SIX: 6 Reasons We Love MICKEY’S NOT SO SCARY HALLOWEEN PARTY”